Liverpool are back at Anfield in search of their 18th home win of the season, where Jurgen Klopp has handed Curtis Jones his first Premier League start against Burnley.

A second successive win was secured last time out and a third is now firmly on the agenda against a side who has tasted defeat just once since the season restarted.

The Reds have struggled for consistency but their clinical edge and intensity was on show from the off on the south coast and there is hope it will be front and centre once again this afternoon as Klopp’s men continue to push to break the all-time points record and secure 19 Anfield wins.

Liverpool were dealt a blow in the form of Jordan Henderson being ruled out for the remainder of the season, however, with a knee injury which ensures Virgil van Dijk will captain the team today.

The Dutchman will sit alongside Joe Gomez, Neco Williams and Andy Robertson, with Alisson in between the sticks as he looks to get one over on his opposite number in the race for the Golden Glove.

The skipper’s enforced absence leads to yet another midfield shuffle, with Fabinho returning to sit alongside Gini Wijnaldum and Curtis Jones – who earns his first full league debut for the Reds.

Meanwhile, in attack, Sadio Mane makes his return to the XI, joining Mohamed Salah and Roberto Firmino – where the Egyptian king will be eager to keep pushing for the Golden Boot.

There is no place on the bench for James Milner as he is out as a precaution due to a slight muscle strain, but Klopp still has the likes of Naby Keita, Harvey Elliott and Alex Oxlade-Chamberlain to call upon from his extended bench. 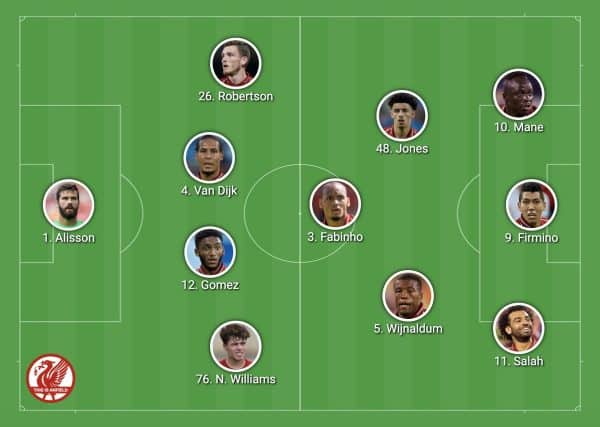