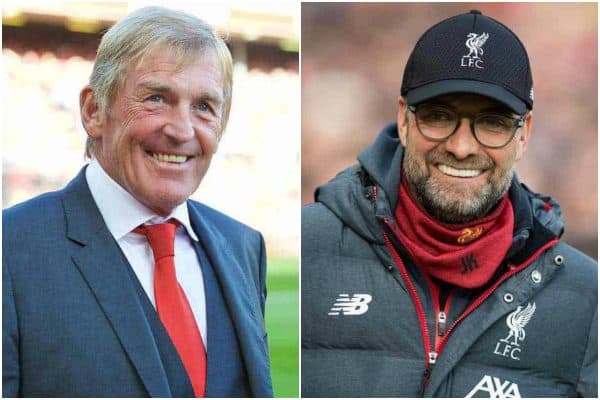 “It’s for all of them as well” – Klopp dedicates title win to Dalglish, Gerrard and Carra

Jurgen Klopp has expressed his delight that Sir Kenny Dalglish will be the one to present the Premier League trophy to the Liverpool players at Anfield.

Perhaps the most iconic figure in the club’s history, and the best player ever in many peoples’ eyes, Dalglish was, until this term, the last league championship-winning manager at the club.

Thirty years ago, Dalglish won the league with the Reds and brought himself on as sub while he was still player-manager, clocking up his final appearance at age 39.

Now he’ll present the championship trophy to Jordan Henderson after the match against Chelsea and Jurgen Klopp says it’s the perfect scenario and proof of how much Liverpool Football Club means to people.

“First I have to say there’s no chance that I come on as sub tomorrow night!” Klopp joked in his press conference.

“It’s absolutely great. Directly after the game when we became champions, at the hotel and we had all the [media] duties to do, and then you saw Kenny and Graeme Souness in the studio and how much it meant to them as well, it was really nice to see.

“This club touches you, gets you and even if you wanted I don’t think you can ever get rid of it. It’s so big and emotional. You stay together forever pretty much.

It’s not only Dalglish, of course, who enjoys legendary status at the club and who has given much and more to trying to keep the club at the top.

Klopp also acknowledged the input of the likes of Steven Gerrard and Jamie Carragher among many others who have almost taken the Reds to the title before, only to fall agonisingly short at times.

They may no longer play their part on the pitch, but Klopp sees them all as bricks in the foundation along the way which allowed the current crop of stars to take the final steps.

“[With Kenny I’m just] as happy as I was for Stevie. We had some messages through the lockdown but after, too, because it means so much to him, so much to Carra, and they are examples of all the players in the past who tried it so hard.

“They know exactly what this team did, how big the pressure can feel when you are close to it, and my boys did sensational well with it.

“I’m happy they recognise it as much as my team recognise exactly how much it means to that generation of players.”

Several club legends are likely to be inside Anfield on Wednesday night, with the club having been given special dispensation to allow them in while observing safety protocols.