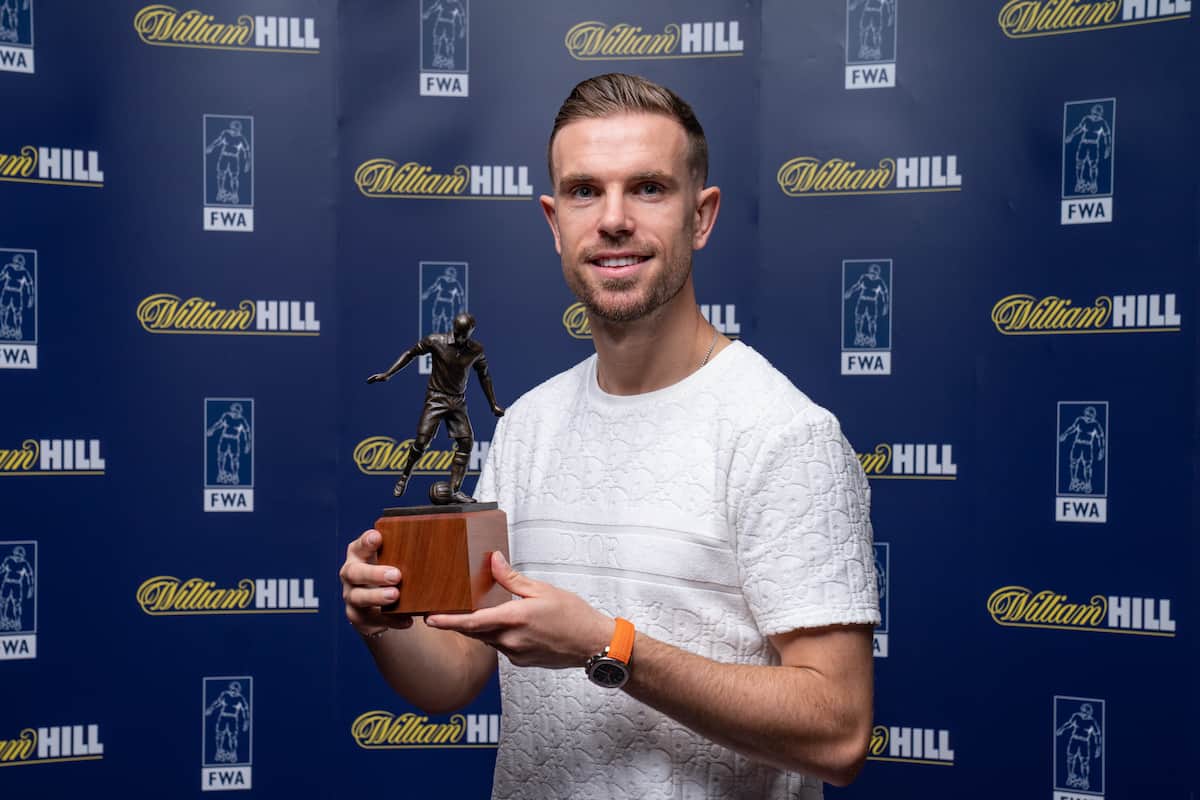 Jordan Henderson has been voted Footballer of the Year by the Football Writers’ Association, fending off competition from Kevin De Bruyne and a host of team-mates.

It has been an incredible campaign for Henderson, as captain of Liverpool Football Club, culminating in lifting the Premier League trophy for the first time in the club’s history.

The 30-year-old made 40 appearances in all competitions before a knee injury ended his season earlier this month, including 30 in the league as the Reds coasted to the title.

His performance levels have been fantastic throughout, but particularly when Fabinho was sidelined over the turn of the year, with Henderson filling in exceptionally in the No. 6 role.

He also scored four goals, which is his highest tally since Jurgen Klopp took charge, with those coming against Tottenham, Wolves, Southampton and Brighton.

But it is his leadership that has set him apart from the rest, steering the Reds through an historic campaign with distinction, and playing a key role in maintaining the consistency of dominant champions.

The Football Writers’ Association (FWA) have voted for Henderson as their Football of the Year, beating De Bruyne, Marcus Rashford, Virgil van Dijk and Sadio Mane as the main contenders for the award.

Speaking on receiving the award, Henderson showed his trademark humility by accepting it on behalf of his team-mates, saying “without them I’m not in a position to be receiving this honour.”

“I’d like to say how appreciative I am of the support of those who voted for me and the Football Writers’ Association in general,” he explained.

“You only have to look at the past winners of it, a number of whom I’ve been blessed to play with here at Liverpool, like Stevie, Luis and Mo to know how prestigious it is.

“But as grateful as I am I don’t feel like I can accept this on my own.

“I don’t feel like anything I’ve achieved this season or in fact during my whole career has been done on my own.

“I owe a lot to so many different people—but none more so than my current team-mates, who have just been incredible and deserve this every bit as much as I do.

“We’ve only achieved what we’ve achieved because every single member of our squad has been brilliant. And not just in matches. Not just in producing the moments that make the headlines and the back pages but every day in training.

“The players who’ve started the most games for us this season have been as good as they have been because of our culture and our environment at Melwood.

“No one individual is responsible for that—it’s a collective effort and that’s how I view accepting this honour.

“I accept it on behalf of this whole squad, because without them I’m not in a position to be receiving this honour. These lads have made me a better player—a better leader and a better person.

“If anything I hope those who voted for me did so partly to recognise the entire team’s contribution.

“Individual awards are nice and they are special and I will cherish this one.

“But an individual award without the collective achievement wouldn’t mean anywhere as much to me—if anything at all.”