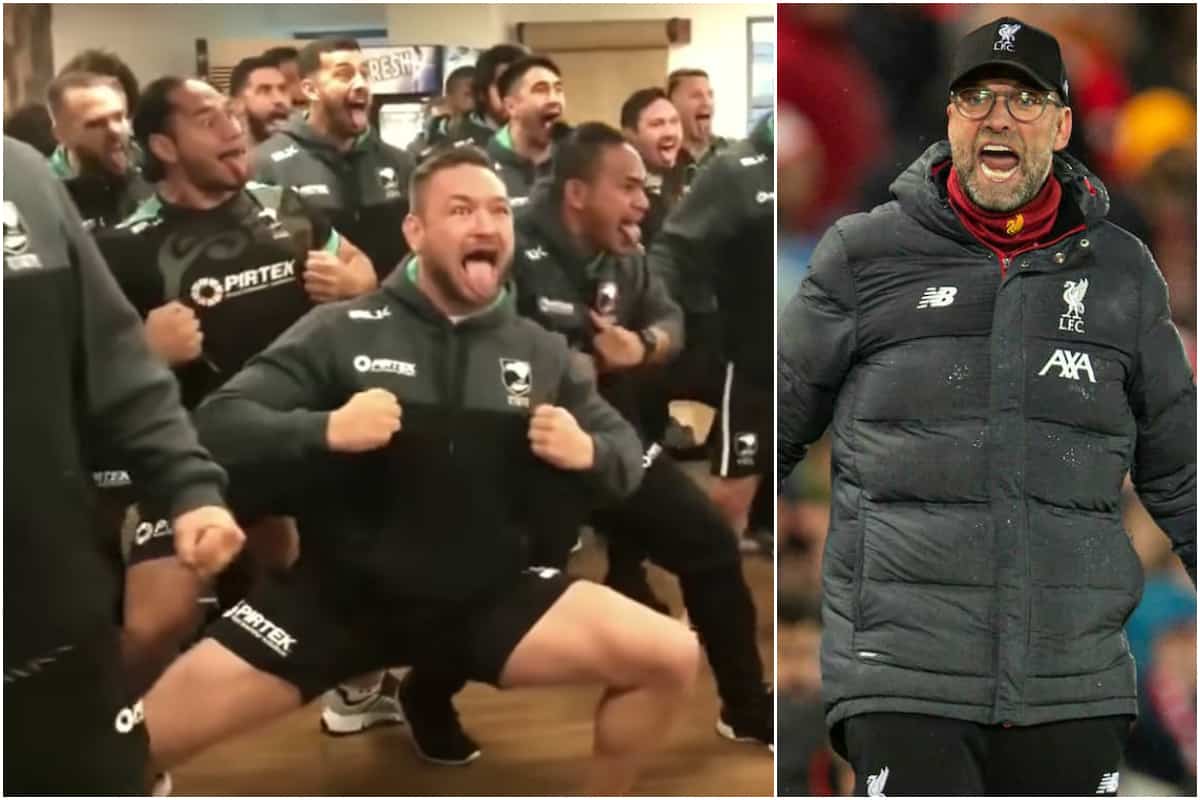 As he explained the All Blacks motto that he applies at Liverpool, Jurgen Klopp revealed the influence the New Zealand rugby union side and the Haka has had.

Speaking ahead of the Reds’ trip to Man City on Thursday night, when questioned about the possibility of a drop in commitment having already won the title, Klopp recalled a phrase used by the All Blacks.

“As long as you wear the shirt, less than 100 percent is never allowed,” he told reporters.

“That’s not my phrase. Fifteen or sixteen years ago I saw a really nice documentary about the All Blacks and I kept that for myself.

“And that’s for each LFC player and for me. That’s what we try to live.”

Elaborating further on this in his extended press conference, the manager spoke about his admiration for the All Blacks, and how he employed the Haka to motivate his first side, Mainz.

“I was completely impressed by these big fellas, how they spoke.

“At that time, 100 percent, the All Blacks were by far the best rugby team in the world.

“I think they had a winning percentage of more than 70 percent, or something like that. And it was a really impressive thing.

“All full amateurs, maybe they got a bit of money I don’t know, but they worked as butchers, as builders and all that stuff, and these guys, these pretty impressive guys, spoke about their past, what it meant to them to play for this team.

“The Haka, I’m sure I’ve told this already once or twice, the last two minutes before the team bus arrived at the stadium, we always listened to the Haka.

“When the door opened people probably thought a bunch of warriors would come out of that bus because it was pretty loud and impressive. It gave us just a little kick.

“They were the All Blacks and Mainz, the main colour is red, so we made ourselves the All Reds.

“Nobody noticed that, because we were a really small club, small team, but for us it was big.

“And that’s how it started for that team. I don’t know how much the influence of that was, but if you ask the players of that time, they would say they really liked it.

Klopp has previously revealed that seeing the All Blacks live in New Zealand was on his bucket list, such is his appreciation of that side.

Though Liverpool have not picked up the pre-match tradition of Klopp’s Mainz side, there are clear ideals that he has taken from the All Blacks that still apply today.

It is a credit to the manager that he is able to learn from other sports—including pro surfer Sebastian Steudtner talking to the Reds during pre-season last summer—to help shape his approach to football.