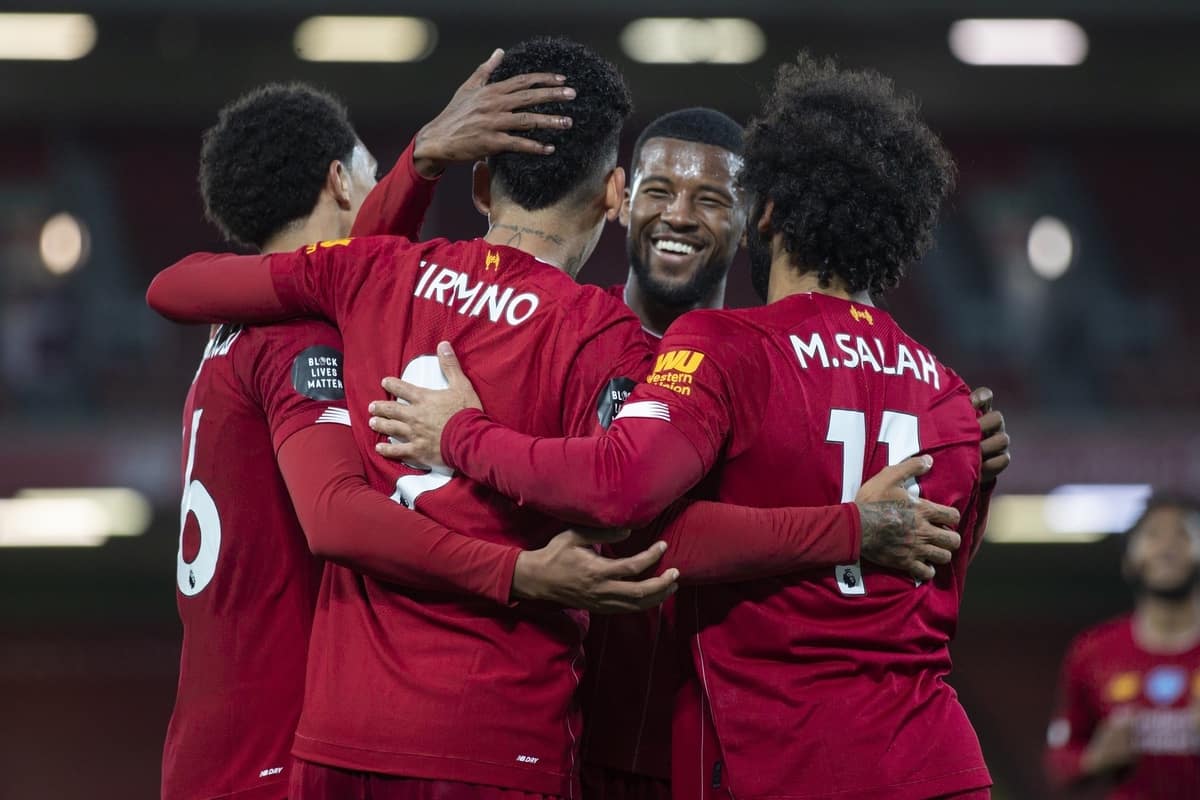 Liverpool reverted to their old top-heavy vintage in their final Anfield game of the season, battling out to a 5-3 win over Chelsea to mark their Premier League triumph.

With a trophy lift to look forward to, the Reds began their final home game of the season with real energy, with Mo Salah particularly bright as he chases an unlikely Golden Boot.

The No. 11 was denied two penalty shouts early on, with his former side taking a particularly robust approach as he zipped about from right, to left, to centre, while Naby Keita also caught the eye on his return to the starting lineup.

Keita looked like making something happen every time he picked up the ball, but it was still a surprise when he burst forward and thundered a shot beyond Kepa and in via a rattling crossbar.

Chelsea‘s physical approach inadvertently left them wide open with 10 minutes left of the first half, with Mateo Kovacic bringing down Sadio Mane to allow Trent Alexander-Arnold to step up and bend a peach of a free-kick in for 2-0.

Cesar Azpilicueta then bundled the ball out and, from the resulting corner, the ball dropped to confusion only for Gini Wijnaldum to blast it into the roof of the net from close range.

That should have been the icing on the cake, but Chelsea were then able to claw one back through Olivier Giroud after Alisson had produced a brilliant save to deny Willian, to cap a frantic first half.

The narrative of the early second half was the attempt to lay on a first Anfield goal of the league campaign for Bobby Firmino, and after Andy Robertson‘s brilliant improvised cross was denied, Alexander-Arnold teed the No. 9 up for a fine header to make it 4-1.

Firmino celebrated in style, with Liverpool looking to coast to an emphatic victory to pave the way for a jubilant trophy lift; Frank Lampard responded with a triple substitution to change his entire attack.

A moment of magic from Christian Pulisic served as a reminder of why Liverpool were once so eager to sign him, with the American dancing through a series of challenges to set up Tammy Abraham for another deficit-reducer.

Curtis Jones was then sent on for his medal-clinching fifth league appearance of the season, but it was Chelsea‘s rising star, Pulisic, who grabbed the next goal, swivelling and firing home to set up a tense final 20 minutes.

Fireworks peppered the second half as fans gathering outside Anfield began the celebrations early, and there were fireworks on the pitch too as the old Liverpool returned with a break-neck counter and a goal from Alex Oxlade-Chamberlain.

That put the game to bed, but Klopp strangely overlooked Adam Lallana despite a place in the matchday squad, though his forlorn gaze, unused on the bench, did not last long as a big victory set the tone for a trophy lift to remember.