Liverpool goalkeeping coach John Achterberg insists Anfield “could have sold out 10 times” for Wednesday night’s trophy lift, such is the desire to celebrate the title.

The Reds are due to celebrate their first-ever Premier League title after the visit of Chelsea in midweek, but will do so without fans due to coronavirus prevention measures.

Played behind closed doors, the game should still be an intense one as the Blues push to secure a Champions League place and Jurgen Klopp‘s side aim to mark the end of the season on a high, but the ceremony afterwards will be surreal.

The club are hoping to ensure it remains as special as possible, with Sir Kenny Dalglish handing the trophy to Jordan Henderson, but for supporters, the next big date on the calendar will be the trophy parade.

When that will take place remains to be seen, but speaking to Dutch publication AD, Achterberg said “the championship party with the fans is sure to happen.”

“There were hundreds of thousands of people on their feet,” he said of the parade for last year’s European Cup win.

“If it weren’t for the coronavirus, there would have been over a million now.

“I know that for sure. The desire for the title was very strong.”

Achterberg went on to detail how the Liverpool squad and staff gathered at Formby Hall to watch Chelsea‘s 2-1 win over Man City to seal the title, saying “either way, the fans weren’t there.” 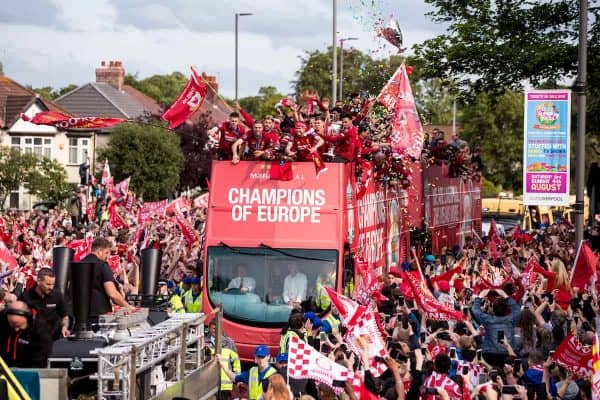 There is an obvious yearning to enjoy the occasion with the supporters who roar them on every game, and Achterberg has followed the likes of Klopp, Henderson, owner Tom Werner and chief executive Peter Moore in pledging the parade will happen when safe.

“When it is allowed, the championship party with the fans is sure to happen, even though that may only be during the new season,” he continued.

“The people of Liverpool, except for all Everton supporters, have longed for this.”

Ahead of Wednesday night’s clash with Chelsea, Achterberg spoke of the serendipity of the London side being the opponents before the title lift, recalling his experience of the loss to the Blues that saw Liverpool’s challenge fall through in 2014.

“Since I have been goalkeeping coach at Liverpool we have been close to the league title twice,” he explained.

“In 2014 we lost at home to Chelsea and then lost our first place. It is nice that we now receive the trophy with the same opponent.

“Anfield could have sold out 10 times for this game. We have a huge fan base and it continues to grow.”

It is certainly a shame that Liverpool’s crowning moment cannot be enjoyed in front of the fans, but as soon as it is possible, there will the mother of all parties on Merseyside.