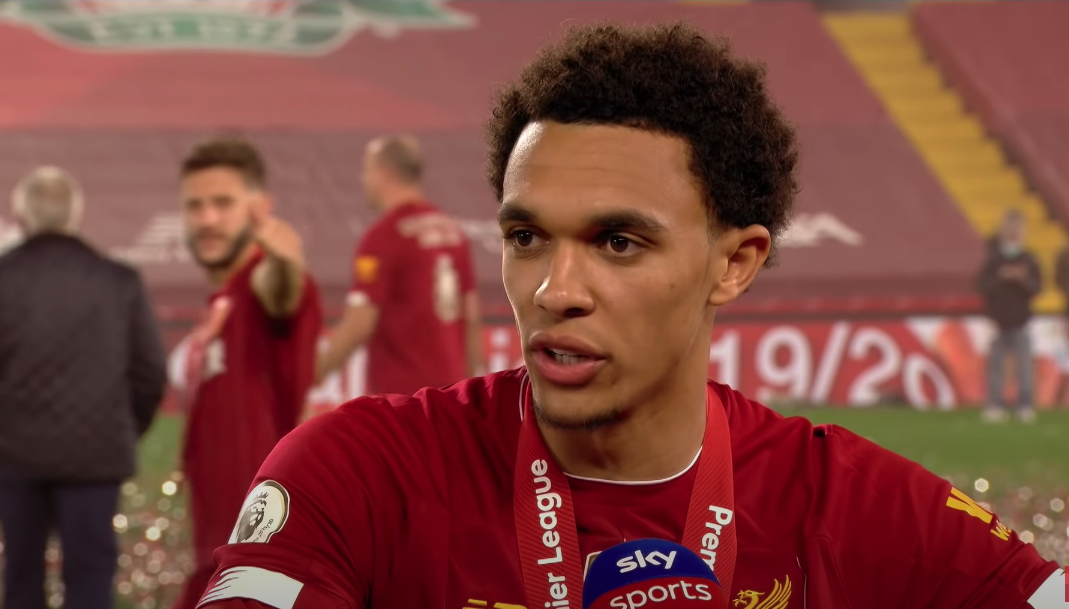 The importance of winning the Premier League was not lost on Trent Alexander-Arnold as he admitted he would “swap every medal” just for the one he was awarded on Wednesday night.

It’s been some rise for Liverpool’s first-choice right-back, merely three years ago the then 18-year-old was on his first pre-season tour with the senior side in Hong Kong picking up the Premier League Asia Trophy.

Fast-forward to present day and the academy graduate is in the top echelon of players in his position at the age of just 21, has broken his own assist record for a defender in the league with 13 and is a World, European, Super Cup and English champion.

But having grown up without ever seeing his side lift the league title, he would trade all which came before for the one he was handed by none other than Sir Kenny Dalglish at Anfield.

“Everything,” Trent told Sky Sports when asked what the title presentation meant to him. “Just the feeling of being up there. This is the one we all wanted as fans, as players, as a club. I’d swap every medal I’ve got just to have this one round my neck.

“But I think that the way we played this season and the feeling we felt being up there on the podium is unbelievable. For the club it’s massive.

The party rightly went long into the night as Jurgen Klopp‘s men celebrated their triumph with each other and their families.

But while they embody their manager’s desire to party at 100 percent, eyes are never too far away from adding another medal to the collection.

“A few years we spoke about it [the mentality of winning]. I think getting the first trophy in and winning the Champions League last year helped our appetite to win more, more and more, and I think nights like this and the feeling that you get now is just the feeling that you want so much.

“It’s something that will drive us and I think next season this is what we want to be like in 12 months’ time, to be in a position to celebrate and hopefully in 12 months we’ll be able to celebrate with the fans here.”

With age on his side and being surrounded by the best in the business this “normal lad from Liverpool” will no doubt taste more success, and the opportunity to repeat this season’s feats but in front of the fans at the finish line will no doubt act as another source of motivation.