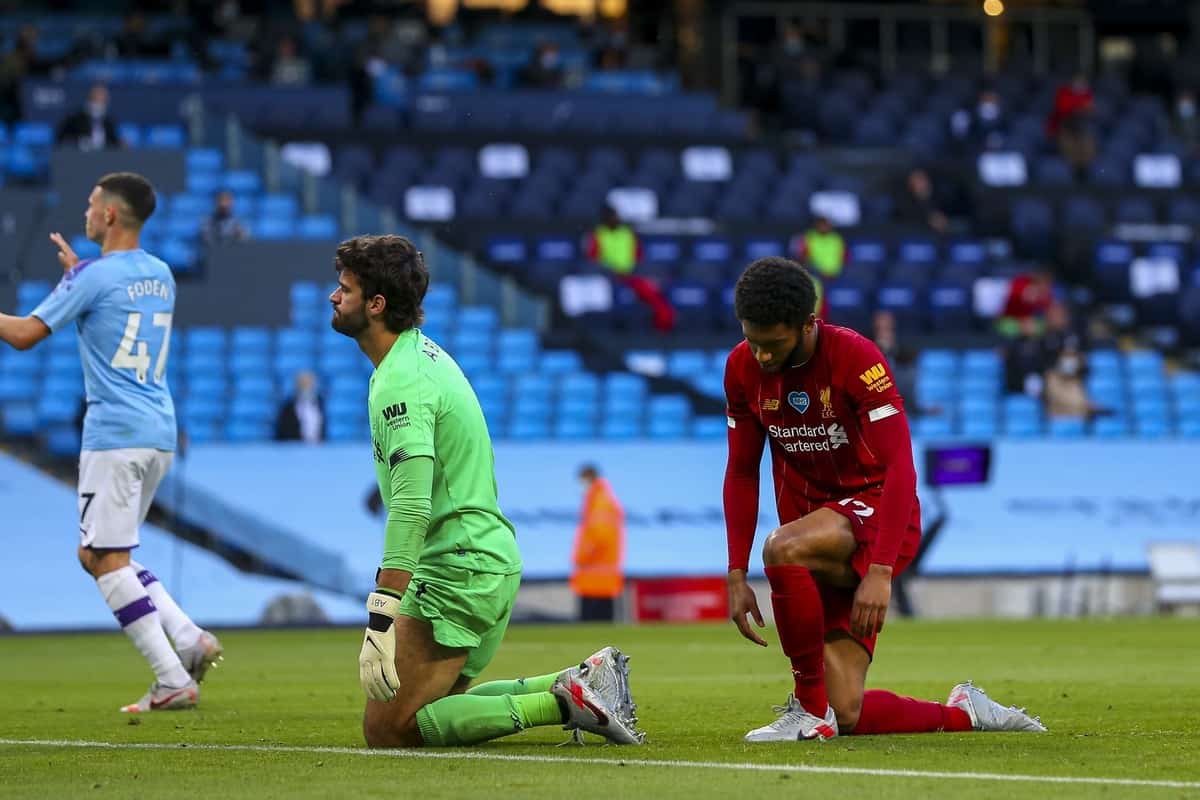 On a perfect night, in the perfect setting, after a guard of honour from last year’s champions, the Premier League winners almost got off to the perfect start as Mo Salah tested Ederson from outside the area.

But there were signs of complacency as the performance dropped off as the half wore on, allowing City to flex their attacking muscle in a game they were desperate to win.

Liverpool began sharply, with Fabinho and Jordan Henderson particularly impressive in midfield and the front three of Salah, Sadio Mane and Roberto Firmino causing problems as City stuttered on the ball.

Salah struck the post on the 19-minute mark as an end-to-end clash played out, which opened up for City soon after to prompt Joe Gomez to bring down Raheem Sterling and allow Kevin De Bruyne to open the scoring from the penalty spot.

Sterling then made it 2-0 after a sweeping move that saw Phil Foden lay him through and, following a great first touch, the ex-Liverpool winger fired past Alisson from close range.

Foden then trebled the lead on the stroke of half-time, with both Gomez and Andy Robertson struggling defensively throughout, and Klopp no doubt calling for a swift response after the break.

Alex Oxlade-Chamberlain emerged from the Etihad tunnel for the second half and surprisingly it was Gomez brought off, with Klopp clearly not satisfied with his lacklustre showing before the break, so much so that he opted to move Fabinho into defence.

The Reds barely improved, with Sterling going close to adding another as his shot deflected off Fabinho, before Virgil van Dijk cleared an effort from Foden off the line.

Mane then contrived to squander a gilt-edged chance laid on by Henderson, stepping over the ball on the edge of the six-yard box when it was easier to tap it in, in a move that summed up Liverpool’s laughable showing.

Klopp then sent on Naby Keita to ensure at least three teetotallers were on the pitch at once, but it wasn’t long until it was 4-0 to City, as Oxlade-Chamberlain inadvertently turned in Sterling’s shot.

Thankfully, it was a game that means little in the grand scheme of things, with Liverpool already champions in record-breaking time, but a four-goal defeat was certainly frustrating nonetheless.

Onwards and upwards. Villa next. Time to play some of the kids?

TIA Man of the Match: The barman at Formby Hall