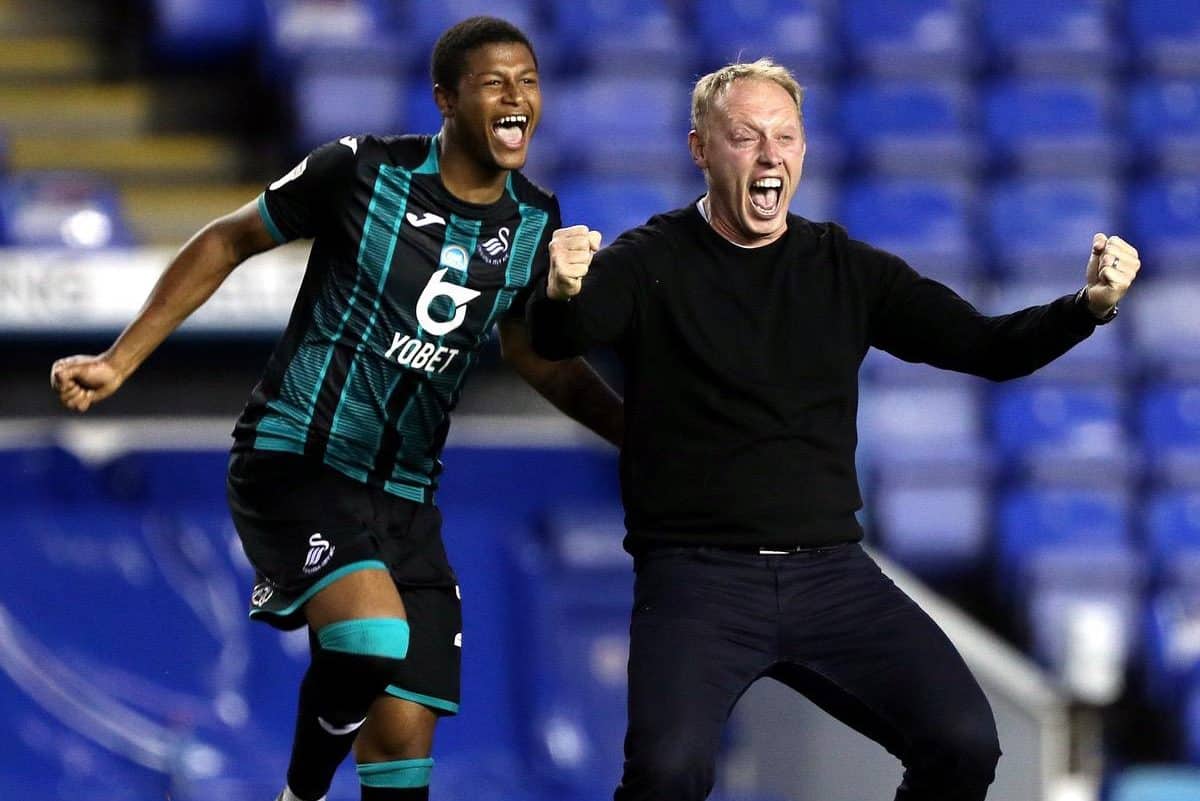 Rhian Brewster scored perhaps his best goal yet for Swansea as they clinched a place in the Championship playoffs through a 4-1 thumping of Reading on Wednesday night.

The Swans headed into the final day of the regular Championship season looking to defy the odds and book their place in the top six.

Rivals Cardiff needed just a point to secure one of only two places remaining, while Swansea required a six-goal and three-point swing to overtake Nottingham Forest.

Somehow, that all played out in their favour, with Cardiff beating Hull 3-0 to book their place, and Forest managing to lose 4-1 at home to Stoke City, conceding the decisive goal in the 96th minute.

Steve Cooper’s side still had a lot to do as the games played out in unison, and they were sent on their way by a stunning strike from Brewster.

Picking up the ball 40 yards out, the 20-year-old drove forward and unleashed an unstoppable shot that flew past Rafael Cabral and into the top corner, breaking the deadlock in the 17th minute.

Reading went down to 10 men in the 40th with Yakou Meite shown a red card, but they were able to pull back for 1-1 before the break as George Puscas equalised.

Veteran winger Wayne Routledge proved the hero for Swansea, though, scoring twice either side of another from Liam Cullen to seal a 4-1 victory in stoppage time.

All eyes were on Forest in those final minutes, and a Nuno da Costa own goal handed Stoke a 4-1 win of their own and guaranteed the Swans leapfrogged them into sixth.

They join Cardiff, Fulham and Brentford in the playoffs, with West Brom gaining automatic promotion to the Premier League alongside champions Leeds.

The playoff semi-finals will take place on July 26/27 (first legs) and July 29/30 (second legs), with Swansea at home to Brentford in their opening clash on July 26.

August 4 is the date for the final, which could be a momentous day for Brewster if he is able to fire his loan club back to the top flight.

It has been a remarkable second half of the campaign for ex-Liverpool youth coach Cooper and his side—which also includes former Reds midfielder Yan Dhanda—with his new No. 19 scoring 10 times in 20 games.

That was the target Brewster set for himself upon his switch to the Liberty in January, and he can now set his sights on even more with at least two more games to play.

He is already the Swans’ second-top goalscorer, with only Andre Ayew netting more, though it should be noted five of Ayew’s 17 goals have come from the penalty spot and just six have come since Brewster joined.

Brentford‘s Said Benrahma (14) is the only Championship player to score more than Brewster since the start of January, with the youngster level with Ollie Watkins, Nahki Wells and Adam Armstrong on 10.

He has made a startling impact since heading out on his first loan spell, and it could prompt a first-team role at Liverpool next season.

But if Swansea do grab their place in the Premier League, he may well benefit from another season in south Wales.