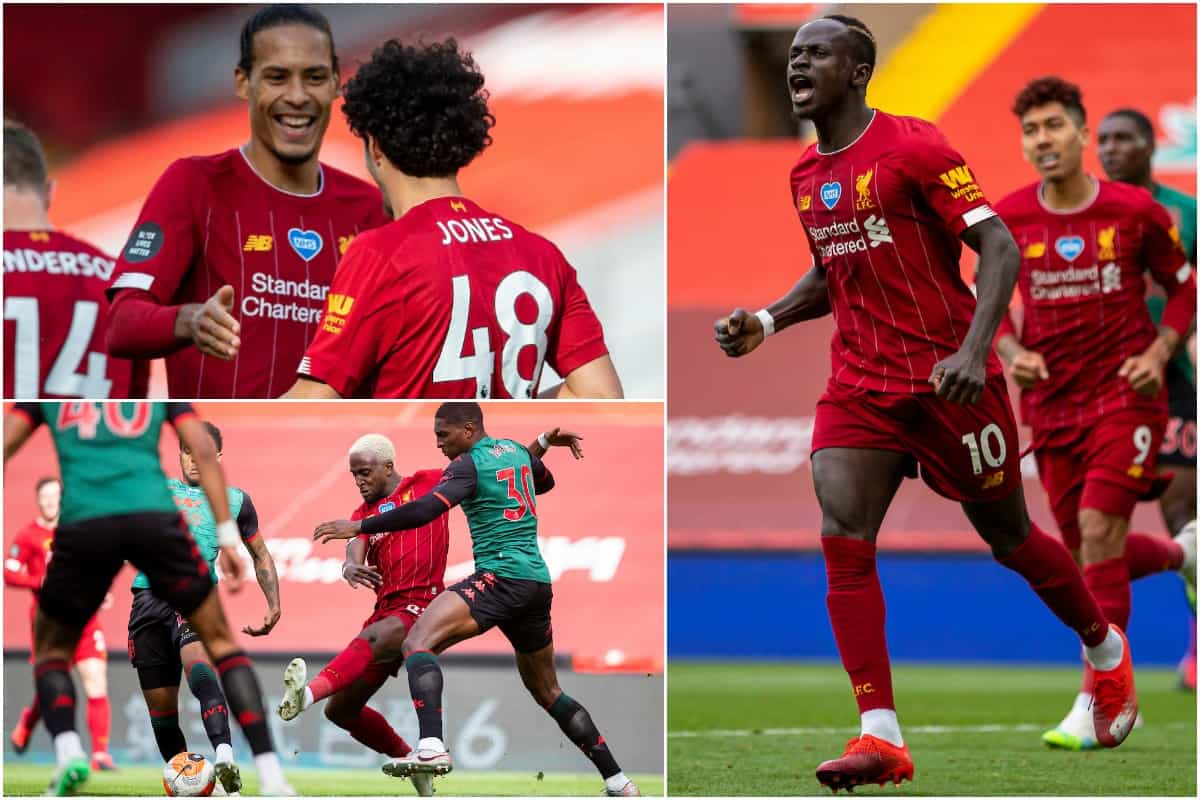 Liverpool returned to winning ways after putting two unanswered goals beyond Aston Villa, a result which came to be after one moment of quality.

It was far from a classic. The wheels were in motion but the gearstick was not in drive as for much of the proceedings it felt as though a shot on target was unlikely, let alone a goal.

But after 70 minutes ticked by, one moment of class proved decisive as Trent Alexander-Arnold, Naby Keita and Sadio Mane picked Villa’s defence apart to notch the opener.

Curtis Jones would double the lead with his first goal in the Premier League to cap off the afternoon and move Jurgen Klopp‘s men to 89 points with five games remaining.

Here, This Is Anfield’s Joanna Durkan (@JoannaDurkan_) is joined by Keifer MacDonald (@KeiferMacd) and Kerry (@KerrySomewhere) to discuss the positives and negatives from Liverpool’s win and who should start against Brighton in mid-week.

JOANNA: The pitch was in superb condition, the banners looked great, a bird managed to catch a worm at Anfield and I stayed awake. Up until about the 70-minute mark these were the alarming positives.

But from then on, things started to look significantly better with the triple change 10 minutes prior proving key to a rise in tempo and the breakthrough from Mane.

Curtis Jones talked about young players needing to be confident and showing a desire to be on the ball in this team and he did just that and was duly rewarded with a goal he’ll always remember.

Alisson also deserves a nod as while he doesn’t always make his work spectacular on the eye, it is largely due to being in the right place at the right time and he was there once more to help secure yet another clean sheet.

KEIFER: It’s fair to say the newly crowned champions of England have had better and more electric performances on their way to the title this season.

There were only a handful of positives on a rather dull afternoon at Anfield, but the standout moment was seeing Jones scoring his first Premier League goal.

He’s a lad we’ve seen more of this season and I think he’s got everyone off their seat when he’s played, most likely with his goal against Everton in January. But his development has excelled over this last 8-12 months, he’s really starting to flourish and you can tell he’s training at Melwood every day with world-class players.

There was no better way for the young lad to celebrate signing a new long-term contract yesterday, I’m sure he’s had far worse weekends.

KERRY: Klopp put out an aggressive lineup but this match ended up as one of those games we had to grind out. Most of the squad played mediocrely or just above average, however, the result is all that matters, and the result came because Klopp made the right changes.

Henderson, Firmino, and Wijnaldum came on and within just over 10 minutes, Mane scored Liverpool’s first goal. Then Jones, who just signed a new five-year contract with Liverpool scored his first-ever Premier League goal for the club, and like Keifer said I’m sure he’s had far worse days.

JOANNA: As I noted before, there wasn’t much to sing about for much of the game and you just wanted to yell at them to wake up.

We’ve seen performances like that before, especially at Anfield, and without the crowd it became more obvious that the tempo and intensity was severely lacking.

Robbo still looked out of sorts but it was nothing compared to Origi, the term playing was generous on his part, and Ox as well – as a lot of attacks broke down due to his missed passes or wrong decision making.

I don’t think the game shed light on anything we didn’t already know and the context of these matches are taken into account but we really do need to strengthen this summer. 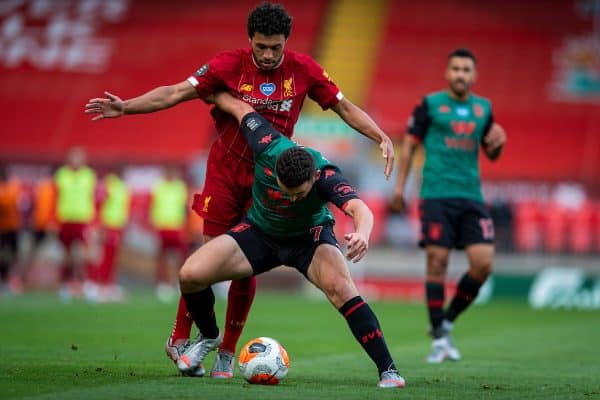 KEIFER: I was disappointed with Oxlade-Chamberlain’s performance, I thought it was a chance for him to stake a claim for a more permanent role, similar to Naby Keita.

I thought Ox showed promise before the season’s suspension, probably playing his best football prior to his injury in 2018. Obviously, it wasn’t just Ox who had an afternoon to forget.

Like Joanna, I thought Robertson looked a shadow of himself for the majority of the game, but once the likes of Jordan Henderson and Roberto Firmino came on the whole team took it up a level, but initially at the start of the game it felt like the sharpness that we had been used to wasn’t there, there was a number of poor passes and touches.

Hopefully, it can be collectively more impressive at Brighton on Wednesday night.

KERRY: Hard to disagree with what’s been said as the first half of the game was absolute drab, we dominated possession but managed only one shot on target.

Villa initially came out as the brighter side during the second half and they wasted several opportunities to take the lead before Klopp made the triple substitution.

Up until that point of the game, I thought Liverpool were unimpressive, with Van Dijk, Robertson, Keita, Ox and Origi all struggling to either leave an impression or committing mistakes that almost proved costly.

I feel this confirms that Klopp needs to focus on the depth of the squad in order to remain at the top. While it doesn’t seem to be too much of a concern considering Liverpool have already won the Premier League, the drop in the squad level needs to be considered during this transfer window.

And who do you want to see given the nod in the XI at Brighton? 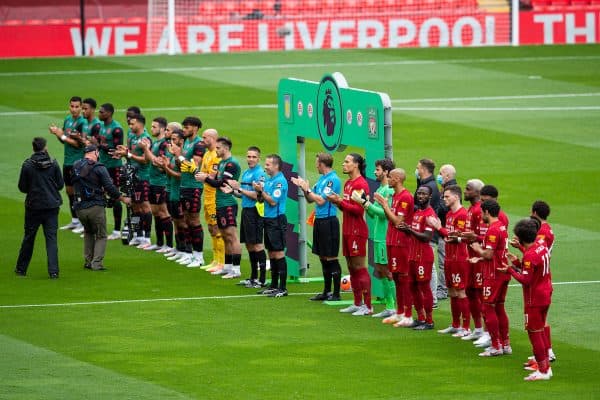 JOANNA: It will be another interesting wait to see how Klopp approaches this one.

Unlike Villa, Brighton are all but safe and I feel this would be an opportunity to give at least one youngster a start, especially considering we are playing every three days.

Trent improved on his City display but it could be time to give Neco Williams his first league start and Robbo could make way for Milner, should he prove his fitness.

I’d like to see Keita start alongside Henderson and Wijanldum, with Fabinho to be handed a rest, and the front three to be reunited, where Minamino could then make an appearance in the second half.

KEIFER: I think Wednesday has to be a full-strength side. I think a good performance is needed just to get rid of some of the cobwebs; Klopp and the players will know that.

We need something similar to the Crystal Palace game, a performance of champions. I think Wednesday’s team has already picked itself and the substitutions today justified that.

After Henderson, Wijnaldum and Firmino came on, the tempo went up and we looked more like the Liverpool we have been used to seeing this season. I think the Fabinho substitution made sense, he had to go off because he’s played a lot of football since the resumption, but he has to keep his place for me, as he’s arguably returned to the heights he set prior to his injury in November.

The one change I’d like to see made is Milner in for Robertson at full-back, but I think with Milner being ruled out on Sunday with a muscle injury, Wednesday may come slightly too soon.

Robertson could do with the rest, even though we massively missed him against Everton on the first weekend back. He looked very fatigued against Villa and a rest would certainly benefit him. But it ultimately depends on the severity of Milner’s injury.

KERRY: I believe Klopp will continue with a mostly aggressive lineup for the rest of the season with an attempt to break some records, notably the 100 points.

However, I also believe he will want to take advantage of the early title win and give some of the younger players a chance, just as he did with Jones here.

He has instilled a winning mentality throughout the entire squad, youngsters included, one which will want to see records broken in addition to the title this season.

But for Brighton, I’m expecting to see a similar side from that against Villa, with Minamino provided a chance to lead the line in place of Origi.