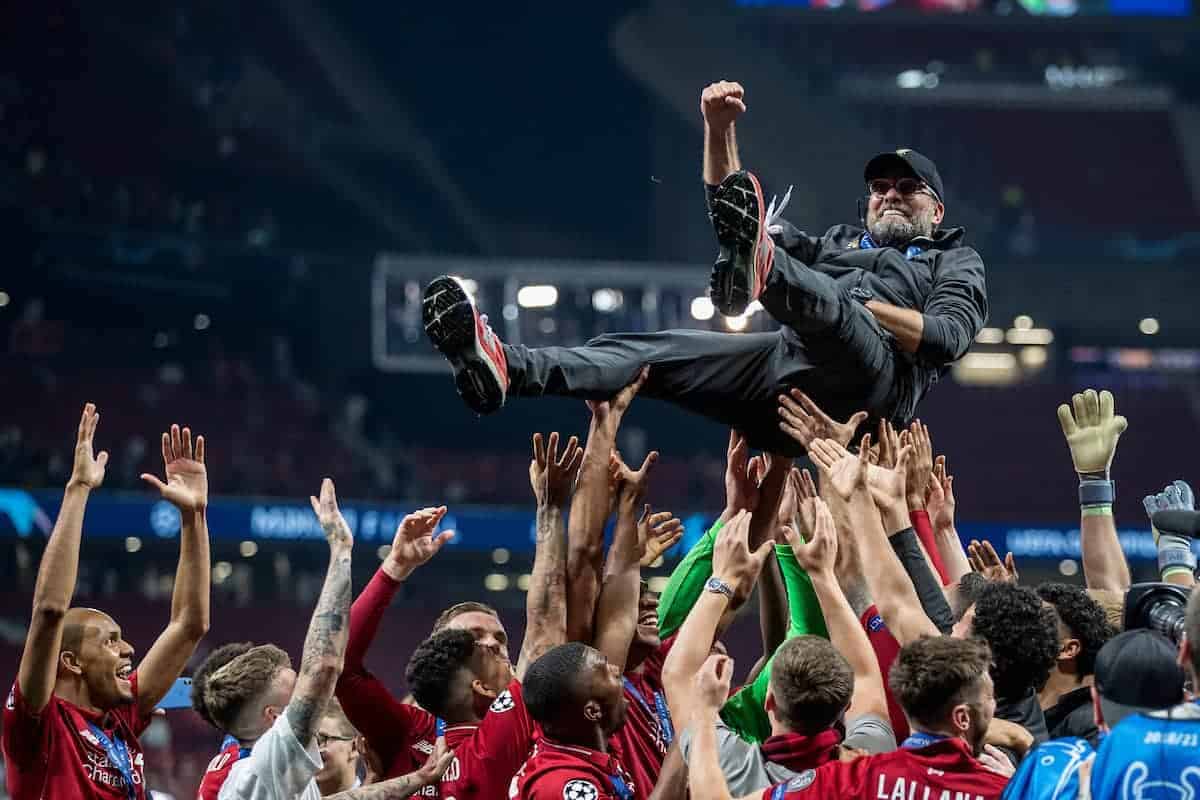 Jurgen Klopp has urged fans to avoid gathering at Anfield ahead of Liverpool’s highly anticipated Premier League trophy lift, as he insisted the party will come as soon as it is safe to celebrate all together.

The day every Liverpool fan has looked forward to for a lifetime or 30 years is now upon us, with just over 24 hours to go until Jordan Henderson acquaints himself with his fourth trophy in 418 days.

The club have gone all out in ensuring the occasion is not an underwhelming one without fans packed into Anfield, with a light show, pyrotechnics and personalised confetti all to be utilised – not to mention Sir Kenny Dalglish being handed the honours of presenting the trophy.

In the days leading up to the occasion, which will, of course, be preceded by the clash against Chelsea, the club and the players have been eager to stress the need to stay at home and celebrate – with mass gatherings still unable to take place.

And the manager sent his own message to supporters in his pre-match press conference following on from words from Merseyside Police Chief Constable Andy Cook, who was eager to stress once more that fans should not gather at Anfield on Wednesday night.

“This pandemic has not gone away. We have worked to remind everyone of the genuine dangers that this virus still presents,” Chief Constable Cook said.

“Other areas of the country close to home have had to reintroduce restrictions following a rise in COVID cases, I’m really proud of the city and it’s no secret that I’m a Liverpool supporter but my duties will always come first.

“Liverpool always been known as city that cares and comes together in a crisis but we’re still in tat public health crisis and I urge people to watch the match at home or at a pub if there is space.

“But please don’t put yourself, loved ones or others in harm of contracting the virus by ignoring the current advice not to gather in large groups. My officers will take action tomorrow night if people fail to adhere to social distancing regulations.

“Please listen to LFC, Mr. Klopp and the players and trust them when they say that they will celebrate, but that day is really not tomorrow.”

And in response, the boss was eager to echo his words that we should not put “anyone at risk” as he reiterated the message that as soon as mass gatherings are allowed the club will have the “party which everybody deserves.”

“What can I say more than that. Andy Cook knows much more about the situation but I agree 100 percent,” Klopp said in response.

“Thank you very much for these words, it’s very important that we remind ourselves again that even some things change, thank god, but we are not through this and we have to make sure that we don’t put anyone at risk.

“That’s what we try constantly and that’s what everybody should try. I really hope our fans know that we mean it when we say [the title] is for you. It’s 100 percent for you.

“The best example is that we won this league before lockdown but we brought it over the line after lockdown and again I’m really happy with what the boys did, not all the results but what all the boys did shows me there’s a nice basis that we will stay a really, really good football team.

“But that should show that together we can do anything if we really stick together and since I’ve been here I’ve always felt a massive support, and so I can understand that it’s a tricky situation.

“Probably people will say now after what happened at Leeds, which is a big success as well, of all the pictures and we all sit there and look at it and think it’s strange now.

“You don’t want to say that’s completely wrong but it is wrong. We cannot excuse one wrong thing or make an excuse, or say if they did it we can do it. The situation is really different to all situations we have ever faced, longer than 30 years.

“Watch the pictures, they will be as emotional as possible. Three months ago nobody thought it would be possible but now we have it and we should do the right thing.

“I can only ask you for that. Stay at home, celebrate there at a safe place with your families and keep in mind we will be all together when it is possible again.”