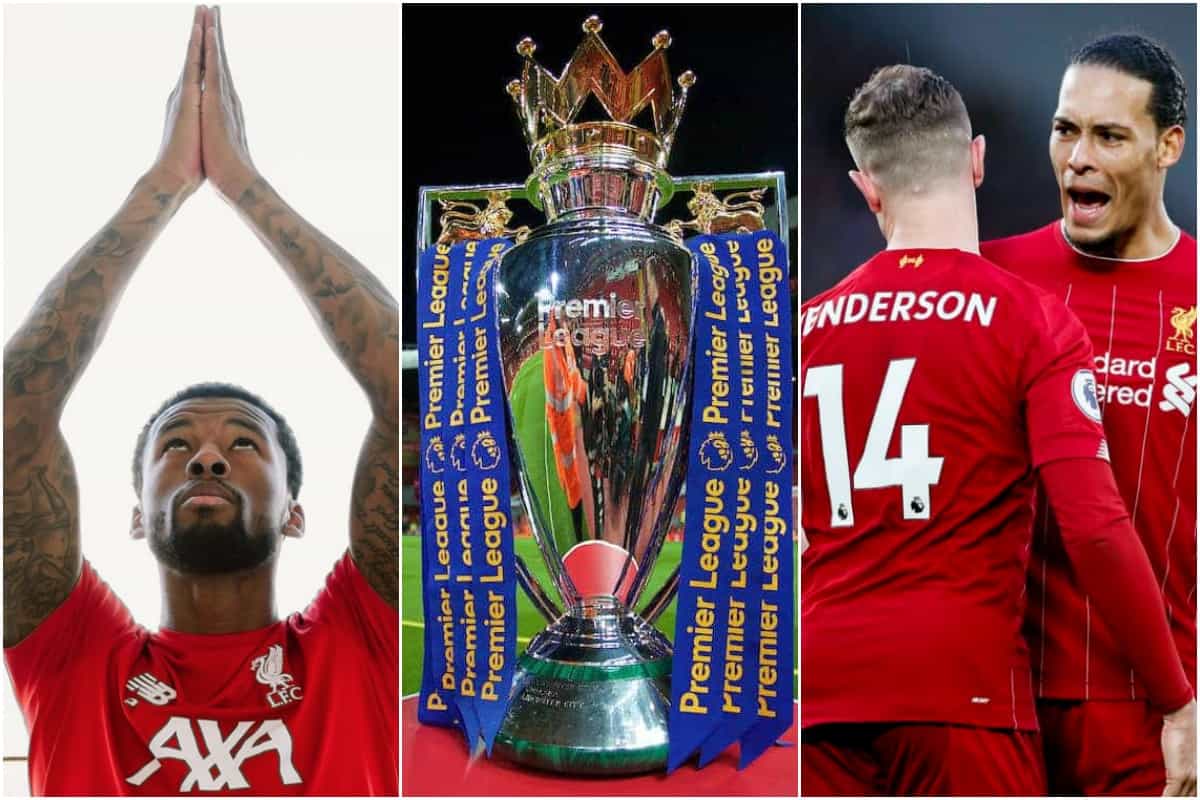 The anticipation is building for Liverpool players and fans alike with the Reds just two days away from seeing the Premier League trophy given the Jordan Henderson shuffle treatment.

It’s a moment some have never seen and others have waited 30 years for, and now it is only a matter of days away for when Liverpool lift their 19th league title.

It is set to be an emotional occasion as the club’s last manager to win the title in Sir Kenny Dalglish hands over the trophy to Henderson before his expected shuffle, knee injury allowing.

A stage has been built on the Kop, as shown by Twitter user @MrPartington as the club look to commemorate the occasion as best they can in the absence of fans, with pyrotechnics and confetti with fan messages also set to take centre stage.

Went on the Anfield tour and the stage is literally set for the lads to lift the trophy on Wednesday #LFC pic.twitter.com/6QYCa3cSqD

The players themselves have been involved in the process to ensure their triumph is marked as best it can in an unprecedented climate, and it will no doubt remain a moment to cherish for a lifetime.

Liverpool officially clinched the title with seven games remaining last month and while initial celebrations have taken place, nothing is to match the players finally getting their hands on a Premier League title they have worked tirelessly for.

And the countdown is on as anticipation and excitement build within the dressing room for the moment which is to follow the clash against Chelsea, with Andy Robertson expecting emotions to run high as he witnesses his captain end the 30-year wait:

“We can’t wait! Obviously, when we won the Champions League last year you get the trophy in a matter of minutes after the game and then you don’t let go of it, so we’ve had to wait three weeks it will be, but to see Hendo lift the trophy above his head will be emotional.

“It will be all the emotions into one, I think. Seeing our captain lift a trophy that has not been at the club for 30 years will bring joy and happiness and everything along with it.

“Of course we would love the fans to be there to enjoy a big celebration against Chelsea but it’s not meant to be and we’ll try to make the most of it.

“But the fact that Hendo gets his hands on the trophy is enough for us and we look forward to that game so much, and then we can really celebrate with the trophy in our hands.”

And the absence of sharing it with the fans was something which James Milner remains “gutted” over but was eager to stress that the moment remains as one for every one of the Liverpool persuasion:

“It will be special, very special. You can see what it means to everyone. The night it was confirmed we were champions, you could see the emotional impact. Not just on us and the manager but the supporters and the past players – the legends. Sir Kenny Dalglish, Steven Gerrard, so many of them.

“When they were messaging and telling us congratulations, you know they really meant it and they were properly made-up. That was great.

“I’m gutted for the supporters, in truth. More than us as players. That said, it is what it is and during this period so many people have made far greater sacrifices than footballers and football fans. People across society have had far bigger hardships, so perspective is important.

“They’ll be with us even if they’re not there. We’re still lifting it for them and ourselves. I’ve no idea how it will feel until it happens, but it won’t detract from the achievement and what this team and staff have worked so hard for.”

And Virgil van Dijk could not hide his excitement for the moment as he insisted it was “good vibes only” two days out from the club’s fourth trophy lift in 418 days:

It was a sentiment echoed by Gini Wijnaldum, with the Dutchman voicing his gratitude for being a part of “this amazing team and club” as he encouraged everyone to “celebrate safely and make this an epic moment in Liverpool’s history”:

So proud and grateful to be part of this amazing team and club. Thanks to all Reds around the world for your incredible support ???? What a journey it has been so far. And in a couple of days finally lifting the @premierleague trophy again after 30 years! Can’t wait for Wednesday. Let’s all celebrate safely and make this an epic moment in Liverpool’s history ???

And there was the message of “every reason to smile this week” from Robbo as Divock Origi looks to get in touch with fans:

Every reason to smile this week!! ?

Dreams will become a reality on Wednesday for players and fans alike, with every player bar James Milner lifting the Premier League title for the first time in their career.

Soak it up Reds.