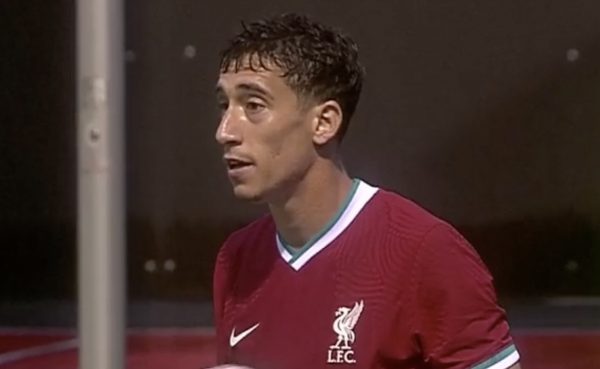 Liverpool are back! It wasn’t a long break, but the 2020/21 season essentially starts here and pre-season is off and running with a 3-0 win over Stuttgart.

At this stage of pre-season it’s usually about little more than getting out on the pitch, getting the first few minutes in the legs and enjoying an easy run-out against local opposition.

But everything is changed, there are fewer games to gear up in and the Reds need to almost hit the ground running from this point on.

The first friendly, then, a 3-0 win over Stuttgart, was more about spotting positives, acknowledging potential changes and looking at the younger players involved.

Goals from Roberto Firmino and Naby Keita in the first half put the Reds clear and Rhian Brewster secured the win; here are five positives we liked from the 90 minutes in tough conditions.

A pair of positive eights

Naby Keita and Curtis Jones were picked in the offensive central midfield roles, left and right of Fabinho respectively.

Both impressed, both were in fact probably the best performers in that dominant first half.

Jones had the clever touches, good movement and confidence in his game to create and take on a shot, while ‘Naby Lad’ produced a few great defensive recoveries and the odd slaloming run.

Keita rounded off the first half with a well-taken goal and after this start and his end to 19/20, every Liverpool fan must be hoping he can put together consistent form and fitness this time around.

If he does, we’re better immediately.

Few players can make elite-level football look like as much of a holiday as Bobby Firmino does.

So when he’s playing a pre-season friendly, it can seem even more fun, even more easy, even more carefree and the type of environment where he can express his brilliance however he wishes.

Much talk last year centred around him not having enough end product in his game, so a goal and assist here were nice to see, even if they ultimately mean as little as that misplaced bleating about the No. 9’s penalty box prowess.

Even in the torrential rain on a sticky pitch, Firmino’s flicks and tricks were on show and suggest he’s ready to go hard once again.

Someone needs to fashion a banner on the Kop later this season: James Milner on a horse leading an army into battle, holding a big pole with a flag on it to show everyone else where to go.

He is Liverpool’s standard-bearer.

Non-stop chatter from Milner, directing his team-mates, demanding more from them when they slacked off even a single run or made a pass at the wrong moment; these are the things which make him so important in the squad and the dressing room, on the training pitch and in matches.

A mouthful of Yorkshire grit went Kostas Tsimikas‘ way all of nine minutes into his debut, all for the heinous crime of not passing on the overlap. Takumi Minamino was similarly berated for not following a goal kick out to the right-back to close down.

Those are the instances which show newcomers, youngsters and wannabe starters just what it takes not just to play for Liverpool, but to win.

12 subs, a tropical downpour, the first game back and a pitch which cut up enormously after the break all meant it was reasonably difficult circumstances to impress in.

But a few players outside of the regular starters did show up well in Austria.

Brewster was decent after the break, scoring a close-range third after clever movement to evade the entire defence. His dribbling and channel running were good too, and he pressed to good effect more than once.

Similarly, Minamino was noticeable for lots of defensive actions, winning the ball back wide on the left and deep in his own half, with a few nice turns and touches into the mix.

And Neco Williams was lively in the first half, getting forward well even if the delivery wasn’t always there at the end.

Good first steps for them all.

Minutes in the legs

It was always going to be half a game each, but the amount of rain might make this 45-minute run-out feel like considerably more for some players.

The heavy pitch, the need to cover ground at pace against counters and the difficult conditions might combine to have made the players expend the energy needed for closer to 50 or 60 minutes, which isn’t the worst situation given the few games we have to play through before the season starts.

Injuries were a bit of a concern at half-time, after some heavy challenges, one or two falls and the downpour seeming to increase, but all of those thankfully toned down in the second 45.

No doubt the training sessions are more important to Klopp and his squad than the games, but all players want to be on the pitch most of all and this was a decent overall start to the new campaign.