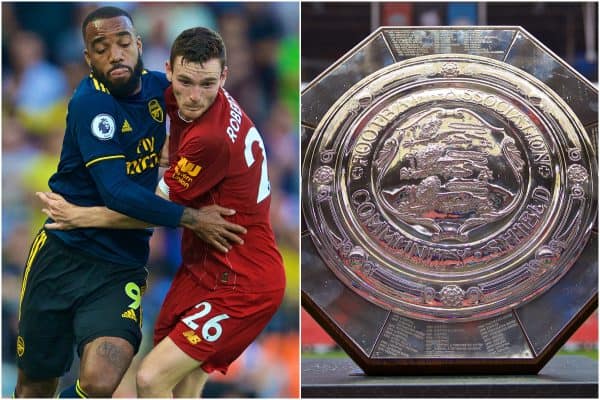 Liverpool and Arsenal lock horns in the Community Shield on Saturday afternoon, with a first piece of silverware in 2020/21 on offer.

The Reds are back, once again!

The break between seasons has dragged since Jurgen Klopp‘s men were crowned Premier League champions, but their defence is almost underway.

Liverpool take on FA Cup winners Arsenal in the annual curtain-raiser at Wembley Stadium, as they look to lift yet another trophy.

It may not be an overly important ‘competition’ in the grand scheme of things, but victory will still be the ideal start to the campaign ahead of the league’s kickoff.

Ahead of the clash, we spoke to Arsenal regular Faisal Khan (@fkhanage) to hear about who he thinks will come out on top at Wembley.

What’s new at Arsenal since the end of last season?

Hope. Mikel Arteta has now settled in as our head coach, and as each day passes, I fall for him more and more.

Our superb, and unexpected, FA Cup win last season has really whet the appetite for the new season and for more silverware.

What is most pleasing is that we have a much more sophisticated approach to games now. Variety in systems, styles and structures is clear for everyone to see.

Arteta reads the game really well and you could see how our game would be different after almost every drinks’ break. The way he can change our instructions so quickly, and effectively, is refreshing and the players really buy into it.

This is why the cup was so important to us – the belief in him from the fans and players will be vital for the tough season ahead.

We also have a new head of set-pieces, so I would expect us to concede less from those and be much more effective offensively – something to keep an eye on.

What have you made of the new signings so far?

We’ve already signed Willian on a free transfer. Not everyone is convinced, but I am. He is a top player, he has won everything in the game and he knows the Premier League.

Contrary to popular opinion, he is in tremendous shape and has a decent record with fitness, so I expect him to make a positive impact and contribution next season.

We needed a wide player – someone quick in transition and with end product – and I think we have that in him. His work rate off the ball is also impressive and is something that Arteta will be sure to use.

Our younger prospects – Gabriel Martinelli, Bukayo Saka, Reiss Nelson, etc. – will also benefit from having someone like that to learn from. I am excited.

William Saliba has also signed for Arsenal. He actually signed last summer, but he spent last season on loan in France.

He is young, athletic, 6’4″ and a ball-playing centre-back. If you’ve seen us defend, excited is not the word.

Looking ahead to Saturday’s game, how much do you value the Community Shield?

Make no mistake: we lose and it’s a friendly; we win, it’s major silverware. That’s the way the hustle works, right?

In all seriousness, it’s a nice game to win. Normally the buildup is so much more exciting as there’s a long pause between seasons, but it has only been a few days!

I think the biggest shame is us fans not being able to go to Wembley and enjoy the day out – I really miss going to football.

Will the result have any sort of bearing on the season ahead?

I don’t think so.

I don’t see us as title contenders, and while we want to be at the top of English football again, we are some way off that.

Beating a top team on paper might mean more for us psychologically, but I don’t think Liverpool will lose any sleep if they were to lose.

I just hope there are no injuries.

Who do you fear most for Liverpool this weekend?

This is a difficult question. If Liverpool go full strength, then clearly it’s their attackers, as they are unplayable on their day.

I suspect Jurgen Klopp will make changes and have a mix of young talent.

Weirdly, with Arteta at the helm, I feel we can take on anyone – we beat most of the big teams last season and so the belief is there.

I suspect both managers will have a bit more experience in the middle of the park, so I would expect the game to be won and lost there.

How well we create chances and get in behind Liverpool’s defence will be key, but so much of it is down to personnel on the day.

I think Arsenal will edge it 2-1. Come on you Gunners!