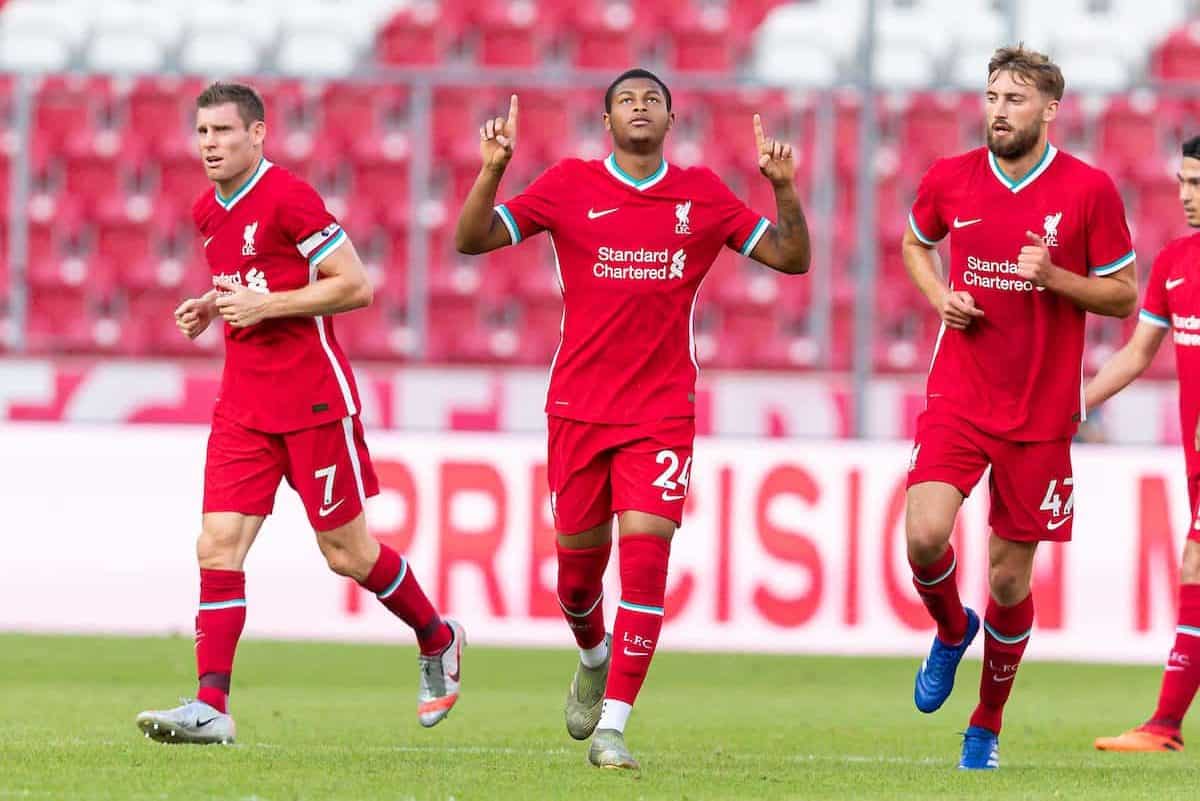 Liverpool’s second pre-season friendly of the summer saw Jurgen Klopp‘s side come from two goals down to earn a 2-2 draw at Red Bull Salzburg.

An early error from Fabinho gifted Salzburg the opener, before an intercepted Joe Gomez pass similarly left a gap which the home side exploited—Patson Daka netting both goals inside 15 minutes.

The Reds continued to gift chances against Salzburg’s lightning counter-attack but also spurned their own first-half chances with Sadio Mane missing from two yards, Roberto Firmino firing wide and Mohamed Salah miscontrolling in the box.

The usual glut of changes came between half-time and the 60-minute mark, but it wasn’t until the final 15 or so that the Reds got themselves back in the game in terms of scoreline.

James Milner did well to set up Rhian Brewster for a smart finish into the roof of the net, before Curtis Jones closed down the keeper and Brewster lobbed the loose ball in from 30 yards out.

Harvey Elliott had a great chance to win the game with almost the final kick, but the Reds take a draw and now head back to the UK for the Community Shield.

Fans back in the ground

Only a few, and not necessarily Reds, but it’s a lovely step forward to have supporters at games again.

Everyone will have their own preferences, but those who haven’t wanted the “added experience” of fake crowd noise will have become used to watching games in near-silence, with the players’ and coaches’ voices the only interruptions to the ball being pinged around the pitch.

To that end, Tuesday was a welcome change, with Salzburg allowing a couple of thousand supporters into the stadium.

It’s another couple of months until the same might be starting at Anfield, but the more people get to see their team play, the better for everyone.

In safe conditions, of course! 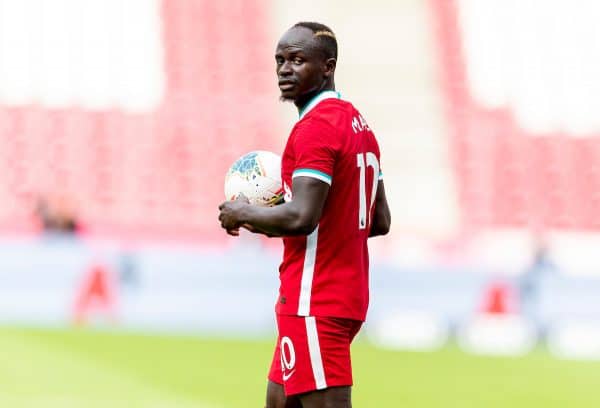 Both Salzburg goals came from Liverpool errors in possession, and another three or four chances came from similar scenarios.

It wasn’t just restricted to the defensive players though, which means we can be fairly sure the Reds players were merely fatigued after heavy pre-season sessions, still lacking a first touch at times and needing that rhythm which comes with minutes on the pitch.

It might be a concern a few weeks down the line because of a lack of warm-up games this year, but that’s also why the seniors are starting all the games already when usually we’d see a mix of youngsters in there.

Mo Salah, Alisson Becker, Fabinho, Roberto Firmino, James Milner, Ki-Jana Hoever and others all produced notable moments of misjudgement at either end of the pitch which could have led to a much higher scoreline overall.

As Klopp explained, the players had an intense training session in the morning. They now head back to Merseyside for more of the same.

There’s no question Klopp is playing the strongest lineup he can at present from the start, with the aim of continuity at the start of the ‘real’ season.

The No. 8 was on the right of the three centrally and not quite as effective as he can be, but still showed good passes, a few nice moments of dribbling and strength in the middle and the usual eye for exploiting space.

Almost every Liverpool fan is keen to see Naby get a real run under his belt now, having shown he can be a mercurial, match-winning talent.

Add him to the regular 11 that Klopp can choose from and it’s a more penetrative, unpredictable side immediately.

Now we’re getting closer to the start of the real action, a few players got themselves a full hour of game time.

Virgil van Dijk went just short of that after a cut to his face, but gradually building up the load would normally happen about three or four friendlies in—after only game two, the likes of Salah, Mane, Gomez and Andy Robertson are already up to that point.

If there isn’t another game arranged in short notice back on home soil, the Community Shield will see five Reds move up to 90 minutes of action already, with six subs allowed in that game.

Even if the goalkeeper and centre-backs make up the expected bulk, of that, a couple of the fittest players in the squad are going to be asked to have to push through the extra minutes early.

Hopefully it leads to no further injuries, knocks or strains as the loads haven’t been built up in slower doses beforehand. 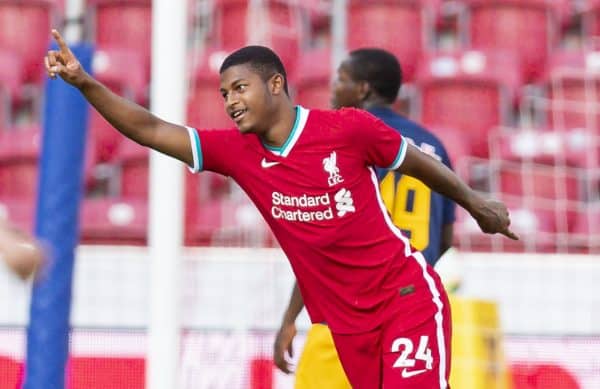 Pre-season isn’t the time to go overboard about players, we’ve learned that through years of disappointment and pointlessness, but certainly it can be a time when youngsters or fringe players show they deserve more involvement.

Rhian Brewster is doing exactly that, scoring three times in two sub outings so far, with a real range of finishes on show.

What they all have in common, though, is Brewster’s ability to find space and anticipate the ball arriving in key areas—there hasn’t been a defender within two or three yards of him for any of his three strikes and he hasn’t needed to sprint onto the ball for them, either.

He’s simply there, waiting to pounce and with the technical skill-set and confidence to finish, first time or after a touch and turn.

Billy Koumetio had good moments again in defence, as did Nat Phillips, while Takumi Minamino continues to excel when given the chance to receive the ball to feet in deep areas. That’s where we’ll get the best of him, not running the channels relentlessly.

Plenty for Klopp and his coaches to work on in the next few days before a trip to Wembley, but plenty of reasons to smile, too.