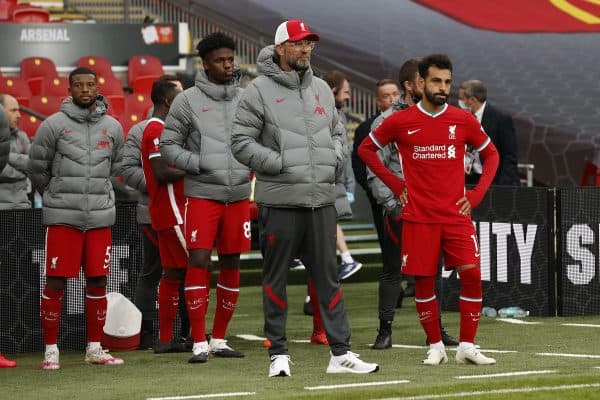 The media felt Liverpool came unstuck by some “nagging issues” in the Community Shield loss to Arsenal, as the need for reinforcements was highlighted.

For the second season running the Reds suffered defeat on penalties at Wembley to miss out on the chance of more silverware.

Takumi Minamino’s first Liverpool goal forced the game to spot-kicks, but Alisson was unable to make himself a hero as Pierre-Emerick Aubameyang struck the winning penalty.

It was a good workout for the Reds overall, and here is all the key analysis from the media assessments on the season opener.

The Liverpool Echo’s Ian Doyle had his glass half empty, as he analysed how this Community Shield defeat failed to provide the positives of last year as the Reds came unstuck to familiar issues:

But there wasn’t quite such encouragement from this latest Community Shield disappointment for the Reds.

Rather than point to a profitable future, frustrating defeat to Arsenal instead underlined some of the issues that have been nagging away ever since Liverpool ended their 30-year wait to be crowned champions of England.

The BBC’s Emma Sanders saw a Liverpool side who have lost the “air of invincibility” that drove them to the title:

There is certainly no need to panic but the air of invincibility Liverpool had throughout most of the 2019-20 league campaign has worn off in recent months following a patch of two defeats and a draw in seven games at the end of the season.

Doyle was unimpressed by how the Reds failed to conjure up the spark needed to overcome Arsenal’s “simple” plan with a lineup that was still good enough to win:

But the worry is how this defeat happened. Indeed, for the second time in six weeks, Klopp’s side struggled to cope with the straightforward tactics of an Arsenal side who, on paper, appeared there for the taking.

Sure, Liverpool had some key players missing. However, their starting line-up was far stronger than the Gunners, and it’s for such absences a squad is constructed.

Melissa Reddy, of the Independent, took a more measured outlook, stating this was only an exercise to improve fitness and that nothing should be read into the result:

Both managers will be fully aware that too much will be read into a game that ultimately means very little beyond elevating fitness levels against elite opponents.

Reporters were underwhelmed by Liverpool’s performance, citing a lack of intensity and midfield creativity as key issues…

The Independent’s Alex Pattle was one of several writers to note how off the pace Liverpool were, assessing that the Reds lacked energy throughout:

Liverpool seemed to play in bursts on Saturday. James Milner was typically industrious from the opening whistle and Andy Robertson also looked sharp from the get-go, but the pair’s team-mates alternated between applying themselves and plodding along.

That’s justifiable given the physical and emotional expenditure of last season, but it doesn’t necessarily bode well for the incoming one.

Writing for Goal.com, Neil Jones saw genuine cause for concern with the midfield performance, noting how a lack of creativity was the Reds’ main problem:

Glorified friendly or not, Liverpool’s display left plenty to be desired.

The Premier League champions were underwhelming, downright poor at times, especially in the opening 45 minutes. They stuttered and they plodded, frustrated by Arsenal’s deep-lying defence and undone by the Gunners’ swiftness on the counter.

The Telegraph’s Sam Wallace pointed out that the flat display was due to Liverpool failing to produce the intensity levels needed which meant the pressing game was not at the races:

The modern Liverpool will not function properly playing at less than the intensity that Klopp demands, although even this side were capable of taking the game to penalties – coming back after a major tactical switch just before the hour from the German coach.

The ferocious Liverpool press that broke so many sides last season was just not quite sharp enough to shut Arsenal down and so out they came with a familiar menace.

Wallace later highlighted Mo Salah as particularly ineffective and was surprised at how Klopp’s team failed to show enough threat to win the game:

Mohamed Salah will rarely be less influential than he was in this game and although the basic principles of Jurgen Klopp’s title-winning season was in evidence with 60 per cent of the possession, the aggression in his players’ press was never enough to unsettle Arsenal’s three centre-halves.

Here Mohamed Salah, Roberto Firmino and Sadio Mané did not quite induce the terror that the names of the teamsheet suggested.

There was a lack of slickness though the endeavour was honest and there was a sense of peak fitness coming.

More difficult to judge Liverpool on these terms other than to say they missed the absent Trent Alexander-Arnold, whose job it would have been to take care of Aubameyang.

The Liverpool Echo’s Paul Gorst spotted a changed role for Gini Wijnaldum as the advanced midfielder, but assessed it was a change that didn’t work:

Named in a midfield three alongside Fabinho and James Milner, the former Newcastle man was entrusted to become the most advanced of Klopp’s engine-room trio.

Bringing on Keita and Minamino, two of Liverpool’s more creative types, was a neon sign that a lack of creativity from central areas was obvious to Klopp. Liverpool looked a much better prospect when the cavalry arrived and Wijnaldum reverted to type in the Reds’ midfield.

The National’s Richard Jolly made a good point on how Andy Robertson‘s performance showed the importance of having competition for places:

It was the first of a string of enticing crosses Robertson developed and while Liverpool have brought in a deputy, in Kostas Tsimikas, this was a sign the Scot will rise to the competition.

It is not hard to see what Thiago would bring. Improving upon a team which has taken 196 of the last 228 points available is not easy, but the former Barcelona man surely fits the bill.

His touch, his vision, his passing range and his ability to resist the press mark him out as a truly world-class performer. Liverpool have good midfielders, underrated midfielders, excellent midfielders in fact, but none of them do what he does.

And Doyle feels it is vital that Liverpool buy another centre-back as Fabinho as fourth choice is not a genuinely viable option:

The sight of Fabinho playing the final half-hour alongside Virgil van Dijk further underlined the need for a new centre-back with Dejan Lovren departed, and the drive of Jordan Henderson was sorely missed in an engine room devoid of tempo early on.

More positively, the watching journalists were impressed by the impacts of Minamino & Naby Keita…

Minamino was dropping deep and playing as a kind of roving No.10 at times.

Liverpool have perhaps lacked this kind of threat when teams defend deep, the player who moves in less predictable patterns, who enjoys finding space between the compressed defensive lines.

The Mirror’s Sam Meade raised an interesting point in suggesting that Minamino has been a victim of his own versatility, which has delayed his settling in process:

The January signing started on the bench having failed to establish himself under Jurgen Klopp thus far.

His case is perhaps hindered – rather than enhanced – by his versatility but when Liverpool needed a goal he came up with the goods.

Jones enjoyed Keita’s impact alongside Minamino and believes the No.8 should be a certain starter in midfield for the Premier League opener against Leeds:

Keita, meanwhile, injected some life, some energy and some risk into a hitherto lifeless midfield. The Guinean has looked sharp for months, and looks a certainty to start when the league campaign kicks off in less than a fortnight’s time.

Finally, Meade reflected on a tough afternoon for Neco Williams, but rightly noted how the emerging right-back will be better for it going forward:

He replaced Trent Alexander-Arnold, who is struggling with a knock, in the starting XI but was given one of the hardest possible tests. Williams was tasked with stopping Aubameyang who started on the left for Arsenal.

The forward was afforded too much room by the Liverpool youngster for his goal and generally got the better of him. Williams will be better for the experience, but one he won’t want to relive anytime soon.