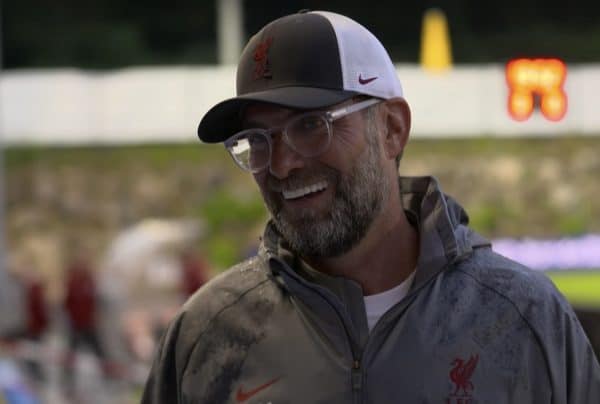 Jurgen Klopp was left “very happy” with his team’s performance in their first pre-season outing, with a 3-0 win against Stuttgart providing the required level of intensity away from training.

The Reds were greeted by a downpour as they prepared for their clash against the German outfit, leaving a heavy, water-laden pitch at the Saalfelden Arena.

Having travelled to Austria one week ago, the boss was eager to see his players ramp up the intensity from training into game situations, with the Premier League season kicking off in just three weeks’ time.

And he was “very happy” with what he witnessed, with his two different XIs keeping Stuttgart off the scoresheet while Roberto Firmino, Naby Keita and Rhian Brewster all etched their name on it.

While conditions did not always allow for slick movement, there were an abundance of positive signs to emerge from Kostas Tsimikas making his ‘debut’ to Takumi Minamino‘s sharp touch and, in general, a valuable run out.

“I’m very happy, very happy,” Klopp told LFCTV after the game. “It was a super intense session today because the weather, wow!

“It rained like crazy, the pitch was really difficult – you could see the water was still on the pitch. That always makes football games tricky.

“Good organised opponent obviously but we scored nice goals but for me, the most important thing was that we felt 45 minutes football was different to a 90-minute session.

“There you have breaks, but here there are none so you just have to go and do it and that was the most important thing to do today, and the boys did it.

“They felt the intensity of the game, very good. So now tomorrow we do less, Monday have two sessions, Tuesday is Salzburg – interesting. So it’s all good.

“I think Ki-Jana [Hoever] rolled his ankle a little bit but apart from that they all should be fine which is obviously very important.”

On the makeup of the goals and his newest signing, Klopp was full of praise, adding: “How we made the goals was absolutely exceptional.

“Obviously Taki was in pretty good shape, Kostas showed some nice glimpses of his talent – so we know we have good boys here.

“Curtis first-half, obviously around the goals, Harvey hard-working until the end, Rhian – they all look really promising.

“They had to work today and that’s what they did, so I’m fine with the performance.

“[Kostas is] a pretty quick player obviously and pretty confident, a really good player. Did well.

“The next challenge is now to get used to all our defending and that will take time, no doubt. But when he has the ball it looks not so bad.”

The Reds will now continue to train over the next few days in Austria before meeting Salzburg at the Red Bull Arena on Tuesday afternoon, a clash Klopp is expecting to be “pretty intense.”