Liverpool youngster Ki-Jana Hoever is considering whether a loan move would be best for him this season, with the Dutchman weighing up his own appearance targets.

Hoever played three times for the Reds’ first team last season, adding to his sole outing in 2018/19, as he remained part of Jurgen Klopp‘s senior squad.

The 18-year-old trained regularly at Melwood, but only featured in a matchday squad eight times, including once in the Premier League—that being the 3-0 loss to Watford.

He is seen as one of the most exciting prospects in the Liverpool squad, but his pathway to the first team remains unclear due to competition elsewhere.

In an AMA with Bleacher Report on Thursday, Hoever was asked whether he thought a loan move to the Championship would benefit him, or if he would profit more from staying at Anfield and likely playing fewer games.

“It’s important that I play games on the highest level possible,” he explained.

“It’s hard to balance a few games at the highest level or a lot of games at a lower level.

“I have to figure out what’s best for me and the right answer will present itself.”

He later added: “I know I’m ready to play men’s football. No more youth anymore. I’d like to do the big work now. 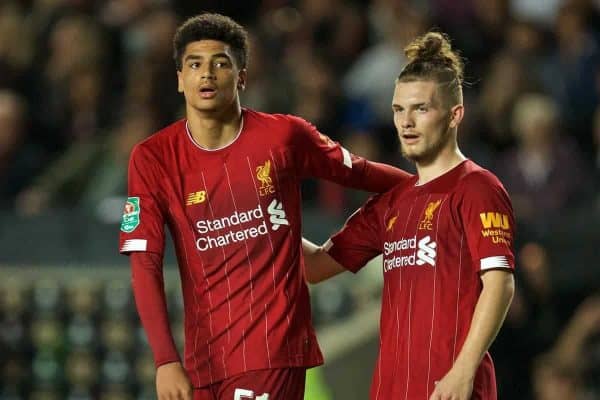 Hoever is unlikely to be short of suitors if he is made available for loan, and with the deadline for transfers from the Premier League to the clubs in the Championship and below extended to October 15, there is plenty of time to make a decision.

Interestingly, however, the teenager was also asked his best position, and claimed he is most comfortable at right-back, believing he won’t be at his best at centre-back until he is 25.

“I’m not physically ready to play centre-back for a whole season. Maybe when I’m 25 I might be ready, but as a right-back I like the attacking aspect.

“I have a vision in my game like Trent, where I can put people away. I think I can be somebody who sets up and assists other players.”

That, of course, presents a problem for Hoever, with Neco Williams leapfrogging him in the right-back pecking order during his time away at the Under-17 World Cup, and now the Welshman is settled as Trent Alexander-Arnold‘s backup.

It could be, therefore, that a loan switch is the best option for Liverpool’s No. 51, but it is unlikely one will develop just yet.