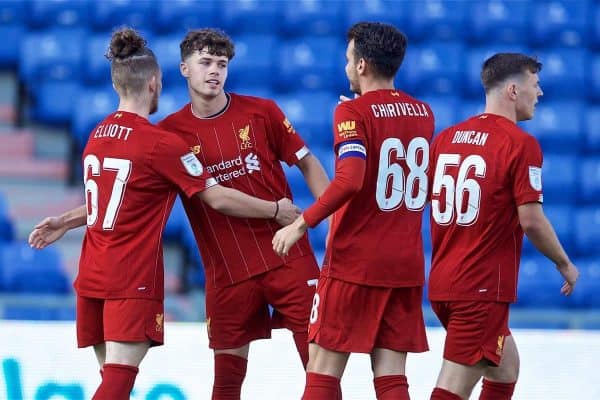 Liverpool have opted to retain their place in the EFL Trophy, with the tournament giving Neco Williams his first taste of senior football before moving to the first team.

Last season was a breakthrough one for Williams, who is now established as backup to Trent Alexander-Arnold and a long-term option for Jurgen Klopp.

But he began it as a staple of the academy setup: a dependable hand for the under-23s who looked likely to head out on loan in the future, with the Football League a clearer pathway to gain experience.

The appointment of Vitor Matos in October paved the way for his step up to the first-team squad, but before then he caught the eye in the EFL Trophy.

A tournament that pits under-21s sides from ‘Category One’ clubs against senior opposition from League One and League Two, last season’s iteration was the first time Liverpool had entered.

Williams started in two of the Reds’ three group games, scoring in both, including a belter in the opening 3-2 defeat to Oldham Athletic in August.

Liverpool exited the tournament having lost to Oldham and Accrington Stanley and drawn with Fleetwood Town, but have accepted the EFL’s invitation to take part again in 2020/21.

The first group game will take place on September 8/9, which could be the first fixture of the season for Liverpool’s academy youngsters; the second game will be on October 6/7, and the third on November 10/11.

Barry Lewtas will take charge of the U21s in the EFL Trophy, supported by new assistant manager Gary O’Neil, and it is likely a strong squad is called upon.

However, plans for the tournament could be affected by a busy start to the campaign for the first team—however, with the Premier League not due to kick off until September 12, the Reds could at least begin with a familiar side.

It is less likely that either Williams or Curtis Jones will feature, but there is a chance the likes of Sepp van den Berg, Ki-Jana Hoever and Harvey Elliott are involved, along with Jake Cain and Leighton Clarkson.

The squad largely depends on which players stay and who heads out on loan, with Morgan Boyes having already joined Fleetwood for the season and Adam Lewis among those expected to depart.

But Liverpool could field the likes of Paul Glatzel, Abdi Sharif, Luis Longstaff, Joe Hardy, Billy Koumetio, Tom Hill, Layton Stewart and Fidel O’Rourke as they aim to progress beyond the group stage.

Williams (two) was top scorer for the club in last season’s EFL Trophy, with Elliott, Stewart and Elijah Dixon-Bonner also finding the back of the net.

Hill (two) was chief creator, with Jones, Yasser Larouci and Dal Varesanovic laying on assists too.