Marko Grujic has rejoined Liverpool’s pre-season training in Austria, but the midfielder may not be staying for long with a return to Germany, on a permanent basis, mooted.

As Jurgen Klopp‘s first signing, it has been a strange four-and-a-half years for Grujic, who has only represented his parent club on 14 occasions.

Joining as a 19-year-old, he revealed he “would choose Liverpool over Real Madrid and Barcelona,” owing to the pulling power of his new manager, while adding that “my only request was that I didn’t want to be loaned out.”

Grujic has since taken in four loan spells, first with a swift return to Red Star Belgrade for the remainder of the 2015/16 season, then on to Cardiff in the second half of 2017/18 and finally two seasons with Hertha Berlin.

It is at Hertha where he found his home, playing 54 times for the Bundesliga club, scoring nine goals and laying on three assists.

The length of his time away, with two consecutive loans at the Olympiastadion, makes him something of an outsider now he is back with Liverpool—not aided by the fact his closest allies, Lazar Markovic and Dejan Lovren, have since left.

He bumped fists with Neco Williams—a player who had not even debuted for the under-18s when the Serbian joined the club—on the training pitch in Saalfelden, while working in a group with the likes of Ki-Jana Hoever and Sepp van den Berg.

It could be seen as a fresh start for the 24-year-old, and according to BILD, his future could depend on the impression he makes over 10 days in Austria.

They claim that Hertha are looking to seal a permanent deal to bring him to Berlin for the long term, following the collapse of their move for Schalke midfielder Weston McKennie. 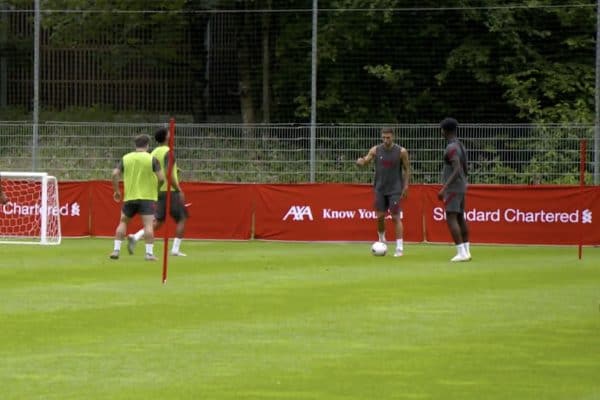 Grujic “could very well imagine a Hertha return,” they claim, explaining that he had now learned German, bought an apartment in the city and even described the Bundesliga’s 10th-placed side as “my club.”

Much will depend on finances, as though BILD cite his ‘market value’ as being £13.1 million, sources on Merseyside have claimed Liverpool would be looking to sell at closer to £20 million.

A compromise could be reached, of course, but it has been stressed that the Reds are not willing to loan him out for another season.

If he cannot be sold, therefore, he would remain as a squad player, and though there are question marks over whether he can hit the standards required, his experience in Germany and ability to play as a No. 6, No. 8 and No. 10 make him an interesting option for Klopp.

Liverpool are likely to play at least one warmup friendly over the coming days, with Grujic expected to feature, and it could be that during this time away Klopp could get a better idea of whether he fits into the setup or not.