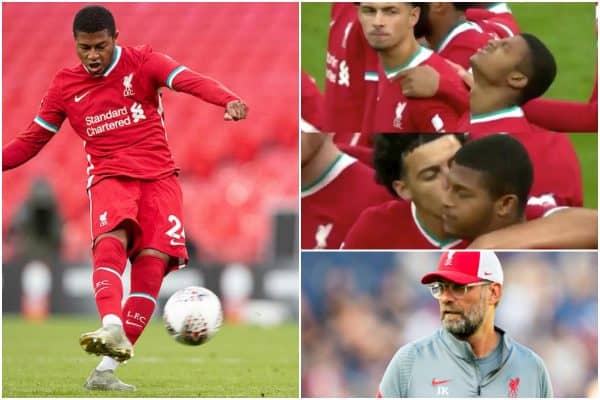 Nobody blaming Rhian Brewster as trademark togetherness prevails at Liverpool

Rhian Brewster missed the telling penalty at Wembley, but the togetherness of the Liverpool side means his team-mates are around him more than ever.

The Reds were forced to spot-kicks after a 1-1 draw with Arsenal in the Community Shield.

Young striker Brewster had notched three goals in two pre-season appearances off the bench, but he was only called upon here for the final seconds—so his shoot-out effort, the Reds’ third of five, was his first touch of the ball.

A fiercely-struck shot was never in danger of being saved, but too much height on it meant he clipped the crossbar instead of finding the roof of the net.

Arsenal remained perfect from their five, and a 5-4 defeat ensued.

Brewster took to social media to state he’d learn from the experience, but he also saved a word for the “support” he had already received after the miss—which wasn’t just limited to fans on Twitter.

Gutted with how things played out yesterday, but I’ll learn from it. Trusting the process. Love for all the support ? pic.twitter.com/5EsZGDbLnV

In the immediate aftermath of his missed effort, it was clear his team-mates were purposely gathered around him in support.

Virgil van Dijk had an arm around him, several other seniors had a quiet word and Curtis Jones went full-on “I got you bro” mode with a hug and kiss of support in the centre-circle.

I love this team beyond words. And these two are our future pic.twitter.com/qwuBfOds8B

As for Jurgen Klopp, the boss similarly dismissed any notion of it being Brewster’s fault that the Reds didn’t pick up the trophy.

After all, there was a full 90 minutes to win the game in beforehand and it was Klopp’s decision alone to replace the experienced Gini Wijnaldum with a largely untested youngster, specifically for that defining stage of a game.

Speaking after the game, Klopp said it’s a win-together-lose-together situation and expected Brewster to score plenty more penalties throughout his career.

“We lost the competition today as a team and Rhian is a part of that. If he would have scored the penalty and somebody else would have missed, it would have been the same feeling pretty much.

“I think with his technique – his shooting and finishing technique – I don’t think ever in his life there will be a goalie in touch with the ball around a penalty, but missing it like this is possible because he takes full risk.

“I didn’t see him ever missing a penalty since we worked together.

“Today it happened; that can happen, that’s how it is. Dealing with defeats is in football a very important lesson always. We are all not perfect in it. But this will not harm him because we will not let it happen.

“And if somebody is to blame for that it’s me because I made that decision. It was obvious we do it for the penalties, we took Gini off and we did it for the penalty shootout. I wanted him in the position because I know he is a naturally confident boy, he’s a real finisher, his penalties are really good usually. Today not – that happens in football and in life, no problem.”

As for Brewster’s next step, that’s yet to be decided. It’s known there are multiple Premier League sides chasing him on loan, and it could be that increased game time underlines what a talent he can become, improving his all-round game.

And he’ll certainly be on the scoresheet plenty over the coming seasons, from the penalty spot and from wherever else on the pitch he decides to shoot from, as last season with Swansea showed.

For now, this is just a first real setback for the striker since he started being involved with the first team.

As many other members of the squad have showed under Klopp, it’s not the errors or negatives which show who they are, but how the players respond to those moments.

On a vastly smaller and less-important scale, this is Brewster’s “Kyiv” moment; one learning experience to recover from and be even more determined to succeed. Next stop, his “Madrid”.