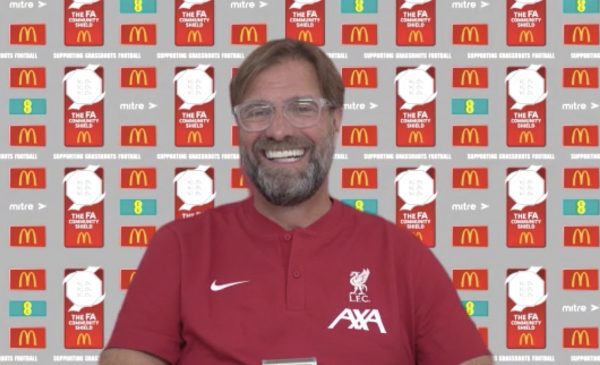 Jurgen Klopp is expecting “the most intense season we’ve ever experienced in our lives” in 2020/21, but insisted Liverpool don’t see the Community Shield as a “friendly.”

The Reds take on Arsenal on Saturday looking to win their fifth trophy in 15 months, albeit the least significant following the Premier League, Champions League, Club World Cup and UEFA Super Cup.

The Community Shield is widely considered a glorified friendly, and given the circumstances surrounding this season’s fixture—which comes less than a month after Arsenal‘s last competitive game of 2019/20, the FA Cup final—it is even more so this time around.

Mikel Arteta has already admitted it is “not an ideal moment to play,” and while Liverpool are in a more comfortable stage of their pre-season, Klopp echoed this sentiment in his pre-match press conference.

“Would I want to play a proper game after two weeks’ preparation? No,” he said.

“But we’ve known it for a while already, it took a while until we had any schedule, but since we’ve known, we accepted it 100 percent.

“So now we’ve had two weeks’ training, worked really hard, which everybody could see in the Salzburg game because the some of the boys had heavy legs.

“We tried to make sure that they are not that heavy any more, but for us, it’s like it is for Arsenal.

“We prepare for a whole season, one of the most intense we’ve ever experienced in our lives because of the amount of games, the time we have for that and all these kinds of things.

“It’s not perfect, but it’s as perfect as it can be and we will try everything to win the game, that’s how it is. Arsenal will probably do the same!”

On the subject of the Community Shield as a friendly, Klopp stressed that Liverpool will “give everything they have to try to win it.”

“We don’t have ‘friendlies’ really, we have testing games, and it’s neither. It’s a competition,” he said.

“It’s really rare you have the perfect time to prepare for a specific game.

“If you asked me how long would you like for pre-season, I would say ‘give me six weeks with the full squad, that would be great’.

“So we have four weeks until the season starts, which will be slightly interrupted by international duties and all that stuff, and of course now by this game.

“But how I said, I would be very surprised if this would be the best game we play this season, but we should be ready to fight for a result, because the opponent has a similar situation.

“So just give it a proper try, give everything you have and try to win it.

“It’s not a test game, it’s not a friendly, it’s a proper game against Arsenal, so we will try whatever we can.”