Jurgen Klopp is unlikely to make many changes for Liverpool’s first big title clash of 2020/21, with Chelsea next up in the Premier League on Sunday afternoon.

The Reds edged through to a 4-3 victory over Leeds on their league opener last Saturday, with Klopp reminded of the need to tighten up as the attack on the next title begins.

Sunday will bring a stiff test of this in action, with Liverpool back after a week’s training at Melwood and up against a side that has injected significant funds into their attack over the summer.

With Lincoln coming up in the League Cup four days later, Klopp’s rotational approach should not come into effect at Stamford Bridge.

Instead, a full-strength side will be fielded at Chelsea, though likely without Thiago.

Thiago eligible, but will he play?

Despite being unveiled after the Premier League‘s midday registration cutoff, Thiago is eligible to make his Liverpool debut at Stamford Bridge with the club filing his papers on time.

The 29-year-old is an unprecedented signing for the Reds, but is still expected to be given time to settle before making his first start for the club.

More likely is a debut off the bench, or perhaps even at Lincoln on Thursday night, with Klopp’s strength in depth in midfield giving him the opportunity to ease Thiago in.

Another who is available but could wait for his first outing is Kostas Tsimikas, who is back in training after a reported case of COVID-19.

The left-back should start against Lincoln, and may be named among the substitutes at Stamford Bridge.

Tsimikas’ return leaves just Alex Oxlade-Chamberlain on the sidelines, with Klopp able to select from a formidable squad as he eyes a second consecutive win in the league.

With Thiago‘s first training session coming on Saturday, and that unlikely to be the most intensive given it is the day before kickoff, Klopp probably won’t risk starting his new No. 6.

It could be that the manager makes no changes at all to the side that emerged victorious in that wild clash with Leeds, despite the sloppiness on show at Anfield.

Alisson is a guaranteed starter, and should marshal a back line of Trent Alexander-Arnold, Joe Gomez, Virgil van Dijk and Andy Robertson again.

The decision to omit Fabinho for the season opener was questionable, but it may be that Klopp perseveres with Jordan Henderson at the base of his midfield.

Fabinho looked rusty in pre-season, and that could see him start on the bench again, with Gini Wijnaldum and Naby Keita fulfiling the more advanced roles. 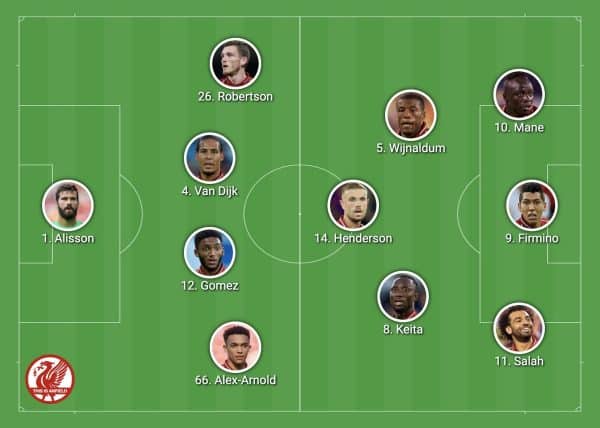 More realistic, though, is the introduction of Fabinho, which could come at the expense of Henderson given the gaps between midfield and defence at Anfield last time out.

Fabinho could prowl behind Wijnaldum and Keita, with the only other likely change to the side coming at the back, with Gomez possibly dropping out.

Though Van Dijk was culpable against Leeds, Gomez has been particularly slack since the title was won, and though there should be no doubt over his long-term future, the availability of Joel Matip could see Klopp shake things up.

Matip can step in and provide Van Dijk with a top-level partner, and his aerial ability may be valuable against Frank Lampard’s tall, physical side: 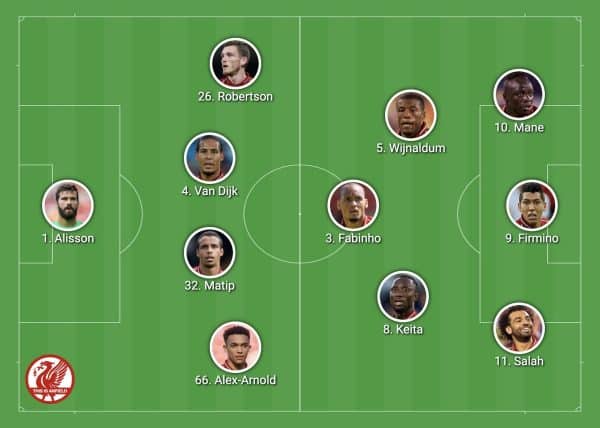 With a trip to Lincoln looming, there will be no big changes to Klopp’s side at Stamford Bridge, and neither should there be, regardless of the scare against Leeds.

One or two areas could benefit from tweaking, and most likely is a like-for-like swap in midfield as Fabinho comes in for the captain.

But otherwise, the manager can expect his tried-and-trusted side to rise to the occasion against Chelsea.