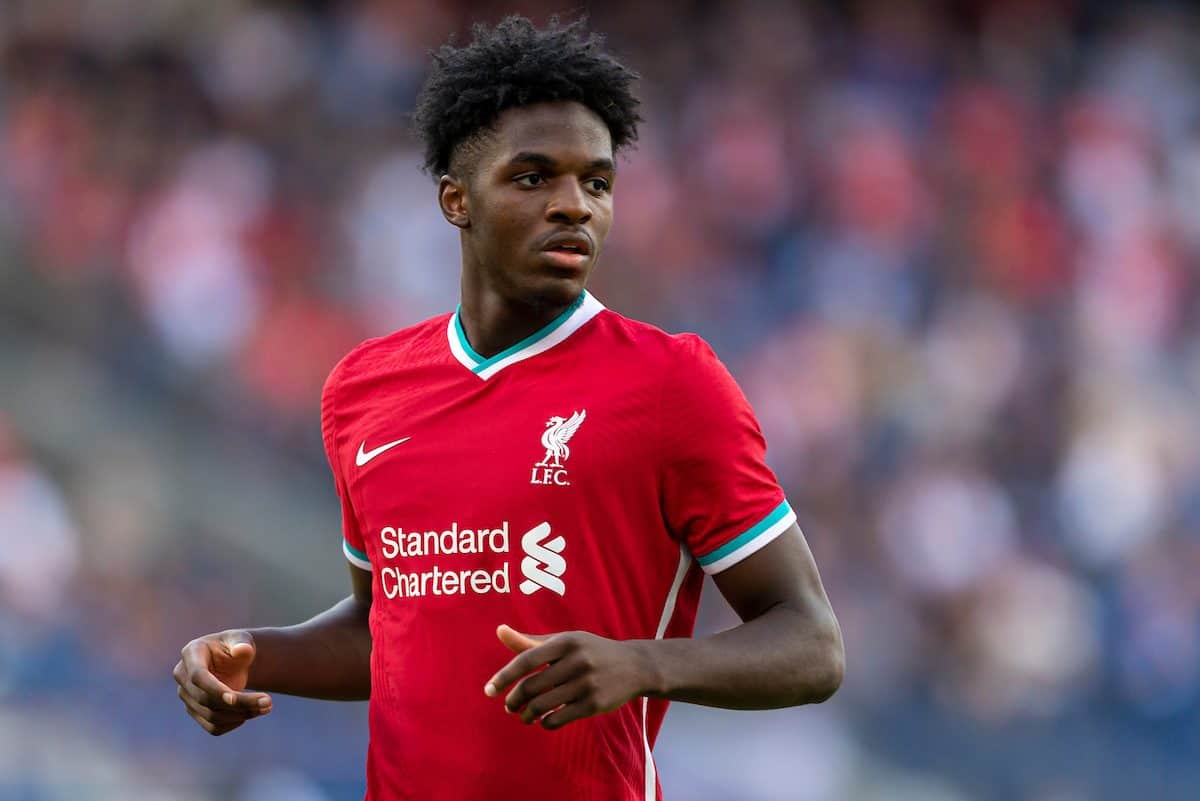 Billy Koumetio has made a meteoric rise from academy to first team this summer, and Liverpool’s assistant manager Pepijn Lijnders has explained why he has stepped up.

The 17-year-old is now considered fifth-choice centre-back within Jurgen Klopp‘s senior squad, with recent injuries to Joe Gomez and Joel Matip highlighting the possibility of an imminent debut.

Koumetio’s Reds bow could come as soon as Thursday night and the League Cup trip to Lincoln, though the Frenchman is seen as a doubt, needing a late fitness test.

Given he made just 12 appearances in his first season at academy level in 2019/20, it has been a swift surge up the pecking order for Koumetio, who caught Klopp’s eye during pre-season.

Another to have been hugely impressed by Koumetio’s ability is Lijnders, who took press conference duties ahead of the third-round tie at Sincil Bank.

“We want to give him that time, so that’s the most important decision we have to make.

“But he is a very tall centre-half, which you’ve already seen of course, but he has a real strength through the air.

“Not only set-pieces, but if you are a pressing team you have to accept there are a lot of long balls and second-ball play to be played.

“Billy is someone who can, even in the air, put the ball where he wants to put it.

“That’s really good for that age, and of course, as everyone sees, his physicality and how strong he is.

“We’d like to give him the opportunity to develop with us, to help us, and to become a strong centre-half for the future for Liverpool Football Club.”

Lijnders is usually reliable for a more analytical view of the squad than Klopp affords, and it is interesting that he notes Koumetio’s aerial ability as key given Liverpool’s style of play.

The teenager is already on par with Virgil van Dijk in terms of height, and despite being only 17 is built like an established senior centre-back, while he has already shown he can dominate in a crowded penalty area.

But more so, Koumetio is a left-footed defender who is hugely comfortable in possession, with his passing range allowing him to break the lines much like Van Dijk, Matip, Fabinho and Gomez.

“Teams adapt, teams try to destroy our plans and what’s most important is that we stay unrpedictable,” Lijnders said of the signing of Thiago.

“Unpredictability means that in every position we can play the last pass, and we can speed up the game as much as we can.”

While the ‘last pass’ being played from centre-back is rare, having another option who can spring attacks from deep is invaluable, and these qualities will help as Liverpool mould him into a long-term successor to Van Dijk.