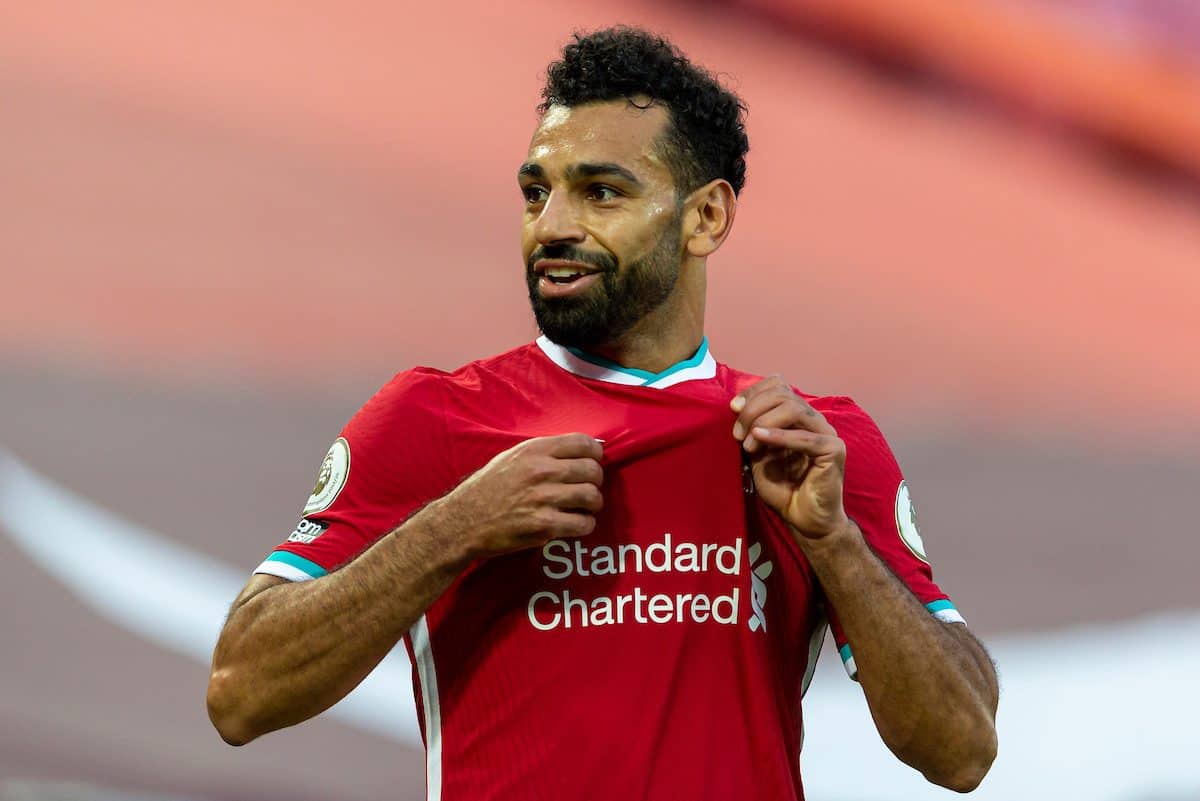 It was the Mo Salah show at Anfield on Saturday night, with Liverpool’s No. 11 netting an all-important hat-trick to send the Reds on their way in 2020/21.

Salah was the only member of the front three not to find the net in pre-season, but he wasted little time when it mattered the most as his prolific career in red continued.

The 28-year-old found the net twice from the spot at both ends of the field, with a rifled strike into the top corner sandwiched in between, goals, in addition to Virgil van Dijk‘s header, which toppled Leeds in a wild 4-3 win.

It was a display which saw the Egyptian at the top of his game, one which continued to see records toppled in his wake and incredible milestones reached.

And here are four of the best from his night at Anfield on the opening day.

Liverpool’s front three are not labelled prolific for no reason and Salah is an integral member, when he is firing so are Jurgen Klopp‘s men.

And his name on the scoresheet in the Premier League bodes well for Liverpool for more reason than one, as it not only adds to his personal tally but it also all but guarantees victory.

Incredibly, Liverpool have won the last 35 topflight games in which Salah has scored, according to Opta, a run which dates back to his goal against Brighton in the final game of the 2017/18 season.

It is a new record in the Premier League, with Salah’s streak overtaking Wayne Rooney’s record of 34 consecutive wins when scoring which was set from September 2008 to February 2011.

And here’s to continuing that streak at Chelsea next time out!

By netting from the penalty spot at the death, Salah did not only win the game for Liverpool but also became the first Red to score a hat-trick on the first day of a league season since 1988/89.

The last man to achieve the feat was John Aldridge against Charlton, a campaign he finished with 31 goals across all competitions.

The hat-trick was the third of Salah’s Liverpool career, where his first came against Watford in March 2018 and the second at Bournemouth in December 2018.

Almost two years between taking the match ball home, but you wouldn’t bet against him notching another before the season is out.

Moreover, it was the club’s 40th hat-trick in the Premier League, a tally bettered by no other side in the competition.

Man for the Opener 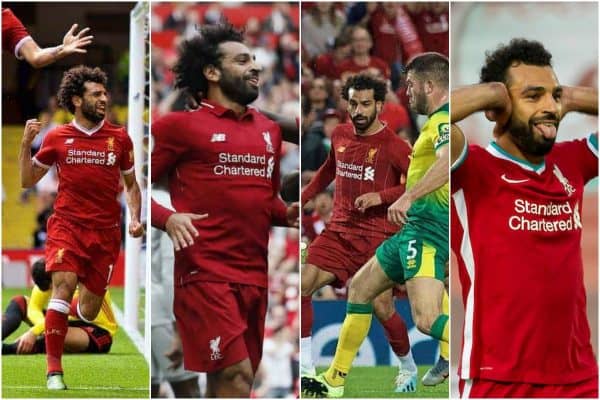 And by safely dispatching a penalty early in the piece against Leeds, he did just that; becoming the first-ever Liverpool player to score on the opening day of the league for four consecutive seasons.

On top of that, he is just the second to do so in the Premier League having followed in the footsteps of only Teddy Sheringham at Tottenham between 1992 and 1996.

4 – Mohamed Salah is the first ever @LFC player to score on the opening day of four consecutive league seasons; he's only the second to do so in the @premierleague for any club, after Teddy Sheringham (1992-93 to 1995-96). Fab. pic.twitter.com/vhX99BEQVv

Talk about starting as you mean to go on. 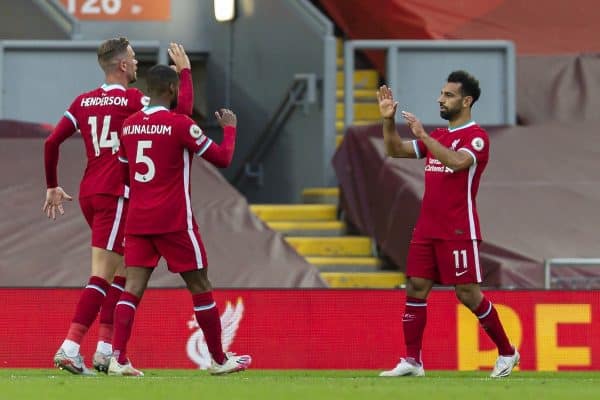 The Egyptian King has been a revelation since joining Liverpool in the summer of 2017, netting a whopping 97 goals in 154 appearances.

And more than half of those have arrived at Anfield in the Premier League.

His three-goal return against Leeds saw him take his tally to 50 goals in the space of just 63 home league appearances – a return which includes two strikes during his time with Chelsea.

It is a stunning return and one which sees him placed behind only Alan Shearer in reaching half a century of home goals in the Premier League in the shortest time frame, with the former Newcastle man netting 50 in 47 appearances – as per Opta.

He pipped former Liverpool man Robbie Fowler in the all-time list (50 in 64), in addition to Les Ferdinand and Sergio Aguero, who both hit the milestone in 65 appearances.

Do we appreciate Salah enough?