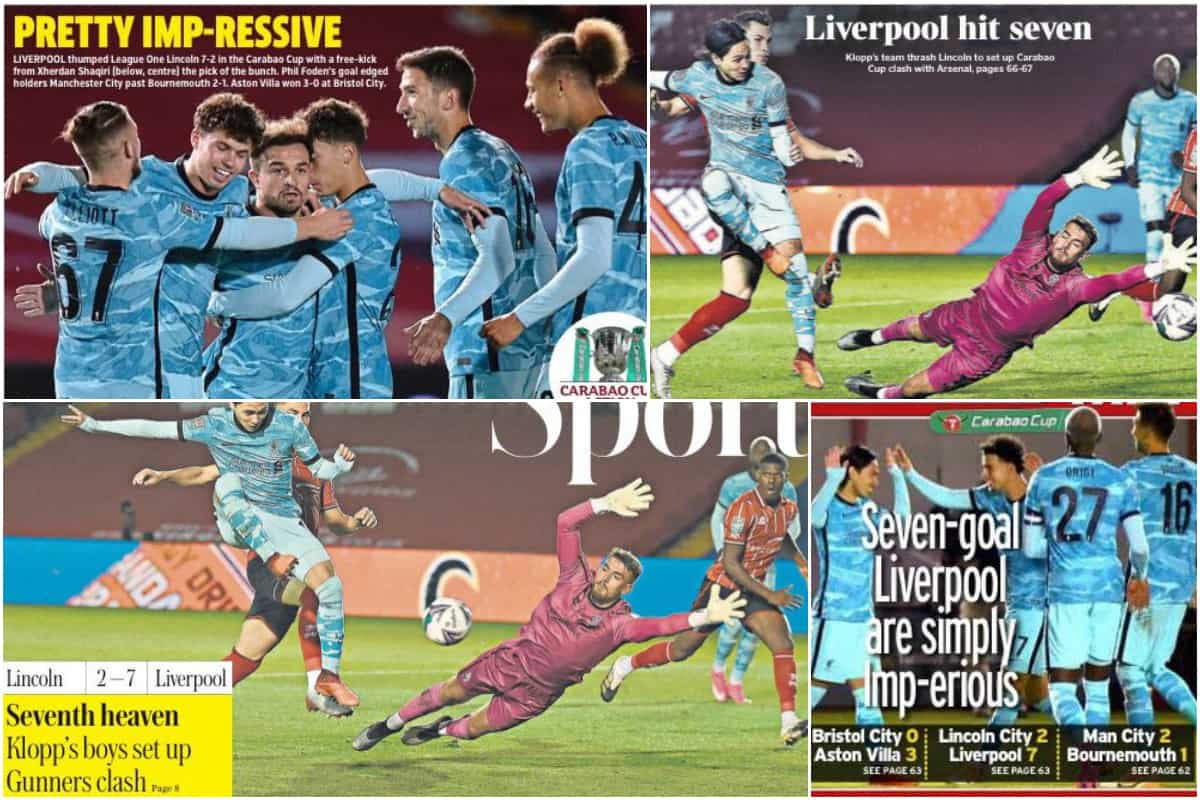 The continued rise of the “exquisite” Curtis Jones was a key talking point in the media on Thursday night, following Liverpool’s 7-2 win away to Lincoln City.

The Reds cruised into the fourth round of the League Cup, dispatching of Lincoln with consummate ease at Sincil Bank.

Jurgen Klopp‘s side led 4-0 at half-time thanks to efforts from Xherdan Shaqiri and Takumi Minamino, as well as a silky Jones double.

Minamino added a second for himself immediately after the restart and there were also goals for Marko Grujic and Divock Origi, on an excellent night for the Premier League champions.

Here’s some of the best analysis from the media on the victory.

It was Jones who filled the most column inches, following a Man of the Match performance from the 19-year-old…

The Guardian‘s Andy Hunter hailed the technical brilliance of Liverpool’s latest homegrown No. 17:

“It was ‘a masterclass of finishing’ according to the Lincoln manager, Michael Appleton, and Jurgen Klopp would not disagree. His Liverpool team delivered the lesson, after all, and Arsenal will be in their sights twice next week at Anfield following this exhibition at Sincil Bank.

“Curtis Jones curated the rout with a performance that comprised touches of class, prodigious work rate and two exquisite goals. There were many of them.”

Henry Winter of the Times was another who couldn’t speak highly enough of the teenager, tipping him to become a key man this season:

“As the game closed out, as the lights in the majestic cathedral gleamed in the distance, Curtis Jones was still demanding the ball, still trying to build another move, still urging Liverpool to score an eighth goal.

“This Carabao Cup tie was all but over by half-time, with Liverpool leading 4-0 and Jones having scored twice, but the 19-year-old Englishman did not let up in the second half.

“With such an intense schedule in four competitions, Klopp will need the likes of Jones. He looks to possess many of the qualities to succeed at the highest level, the vision, composure and physical and mental endurance.”

The Telegraph‘s Jason Burt touched upon comparisons with Steven Gerrard, echoing Winter’s sentiments about his first-team opportunities in 2020/21:

“For all the formidable international talent in this Liverpool squad there is something pleasing about seeing a young local lad – a ‘proper Scouser’ as Jurgen Klopp has called him – wearing the number 17 shirt and running the midfield. Comparisons with Steven Gerrard will always be made but it was certainly an impressive performance from Curtis Jones.

“Despite the arrival of Thiago Alcantara and the depth of midfield options Jones should get more opportunities not least because Liverpool are fighting on all fronts. Jones is earning them.”

“That’s five goals now in just 16 first-team appearances. Amid all the (understandable) excitement surrounding new signings, Klopp knows he has something special developing within his own ranks. Jones, like Trent Alexander-Arnold before him, looks a star of the now, as well as the future.

“Put simply, he looks as if he belongs. There is a swagger about his play, an inner belief which transmits every time he picks up the ball. Fear isn’t in his vocabulary.”

It was also an excellent night for Minamino, who has found his feet at Liverpool and now looks like a superb option…

The Liverpool Echo‘s Connor Dunn believes the Japanese maestro could threaten Roberto Firmino‘s place in the side moving forward:

“Of course, this is a team two divisions below the Reds but Minamino’s performance and his willingness to constantly have a crack at goal and getting reward for his efforts, must give Klopp food for thought about who leads Liverpool’s line on Monday against Arsenal.

“You’d suspect Firmino is top of the list, but given Minamino’s excellent showings in pre-season nothing can be taken for granted – and that is exactly what the likes of Klopp and Michael Edwards would have wanted.

“Creating competition which will in turn push players to strive for better performances while improving the squad all round, will no doubt help the Reds in their quest to claim more silverware this term.”

Dom King of the Mail was in no doubt that a more prominent role is coming Minamino’s way soon:

“If there are questions for Shaqiri to answer, the opposite is true for Taki Minamino. His team-mates rave about his quality and at most other Premier League clubs he would be a certain starter. With this performance, glossed by two goals, you suspect his time is not far away.”

Individuals stood out more the team at Sincil Bank, with forgotten men Shaqiri and Grujic receiving plenty of focus…

The Mirror‘s Freddie Keighley still believes Shaqiri can offer something to the squad, despite rumours surrounding a potential exit:

“The 28-year-old also impressed with his desire to pick up the ball deep in midfield and drive the team forward or stretch the opposition with diagonal balls to the touchline.

“Shaqiri has been linked with a move away from Anfield after Diogo Jota‘s £45 million arrival at the weekend. But a timely reminder of the winger’s quality may convince Jurgen Klopp to keep him in the fold this season.”

Dunn was of the same opinion regarding Shaqiri’s future, heaping praise on him after an excellent display:

“Playing in a more unusual and slightly deeper midfield position, Shaqiri highlighted just what he could do by finding space and driving Liverpool forward at every opportunity while linking the play between the holding players and the attack.

“He was impressive on a number of occasions in collecting the ball and turning quickly to release the pressure on his side and give himself time before picking out another player in hyper turquoise while his inter-play helped create a number of chances at the LNES Stadium.

“Liverpool are, of course, open to offers for the midfielder during this transfer window, but this performance would have done him no harm in making the likes of Klopp re-think about what impact he could have in a busy relentless season for the Premier League champions.”

Keighley also touched upon Grujic’s impact, but his assessment of him was more bleak, such is the competition for places in Liverpool’s midfield:

“It may have been nine months since Shaqiri last started a match, but there were years between Grujic’s previous Liverpool game and him pulling on the shirt at the LNER Stadium.

“Given the strength and depth the Reds boast, it’s hard to see a path for the Serb to gain regular minutes and he may even be as low down as eighth in the midfield pecking order after the arrival of Thiago Alcantara.”