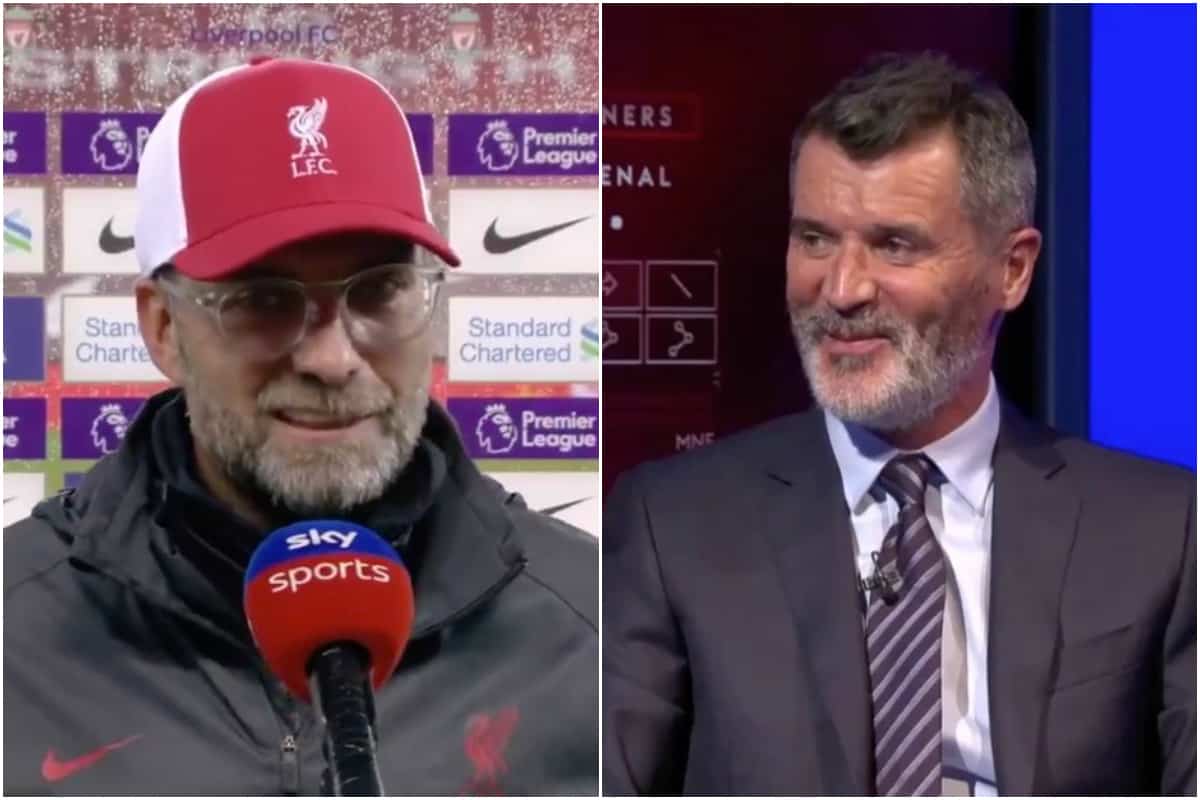 Astounded by Roy Keane’s claim that Liverpool were “sloppy” in stages of their 3-1 win over Arsenal, Jurgen Klopp laughed off this critique of an “exceptional” performance.

The Reds dominated Arsenal from start to finish on Monday night, penning Mikel Arteta’s side back as they stuck to their approach in playing out from the back.

It paid off for the Gunners on one occasion, leading to an Andy Robertson error and an Alexandre Lacazette goal which was soon cancelled out by Sadio Mane, with further goals from Robertson and Diogo Jota clinching a deserved win.

Liverpool had 66.3 percent of possession, with 21 shots to Arsenal‘s four, but Keane’s allegiances shone through as he claimed there was still a sloppiness to their play.

Unfortunately for the ex-Man United midfielder, Klopp was waiting in the wings for his post-match interview with Sky Sports, and he took Keane up on his comments as he kicked off his analysis.

“Everything,” he said when asked what he liked about his side’s performance.

“Did I hear it right, that Mr Keane said we had a sloppy performance tonight? I could hear you already…did he say that?”

Keane replied, “I think they gave up one or two opportunities they’ll be disappointed with…” before Klopp interjected.

“Did he say it was a sloppy performance tonight?” the manager continued. “I just want to hear it, because I’m not sure if I heard it right, maybe he spoke about another game.

“It cannot be this game, sorry. That’s an incredible description of his game. This was absolutely exceptional. Nothing was sloppy, absolutely nothing.

“It was, from the first second, dominant, against a team in form, 100 percent in form, and you have to be careful like hell with the counter-attacks.

“I think 60 or 70 percent of all the balls in behind were offside, you just wait a little longer for the flag, so that’s why it feels not great, but it was offside.

“So Ali had to make one save, they had two balls in behind, you cannot avoid that – you need a goalie in these situations.

“Apart from that, the football we played was absolutely exceptional tonight. That doesn’t help for any other game. Not for Thursday, not for Sunday, not for nothing.

“But about this game tonight, there’s nothing bad to say. It was the opposite of sloppy.”

Keane squirmed in his seat as Klopp turned the focus back on him, and claimed the German had “misheard” him, with Klopp agreeing that he could not have “heard him correctly.”

It is refreshing to hear a manager take a pundit to task, particularly after such a comprehensive performance like the one seen at Anfield on Monday night – he is right, Liverpool were exceptional.

In his post-match press conference, Klopp played down the exchange, saying “it’s all fine,” while Keane later joked that it had “spoiled his night,” backing the Reds for the title as he was “afraid to say anything else!”

There is clearly no bad blood between the two, but it certainly makes for great viewing!