Gini Wijnaldum now returns to Liverpool after international duty amid speculation that Barcelona want to sign him – and reports suggest he’ll hold talks with Jurgen Klopp over his future.

The midfielder played both Nations League games for Netherlands, resulting in a win and a draw, but that was under a new manager.

Ronald Koeman was the Oranje boss who has recently led the revival, but his departure to Barcelona immediately saw rumours emerge that the two would link up again in LaLiga.

To an extent it has been a ‘perfect storm’ which has led to these links: Wijnaldum’s old boss, the Camp Nou club needing a rebuild, Liverpool’s No. 5 having just one year left on his contract and the Reds’ own rumoured interest in Thiago Alcantara.

But there certainly appears to be a genuine desire from the Spanish outfit to bring him in, with reports in England and Spain today almost matching up—other than with Gini’s intentions so far.

In the Mail, Dominic King says that Wijnaldum and Klopp will “hold talks” on the midfielder’s future this week, after he returns to Merseyside from international duty.

King specifically says our No. 5 “has not given any indication so far that he would be prepared to leave”, but also notes that there has been no contract extension offer and that the Reds don’t want to lose him for free. 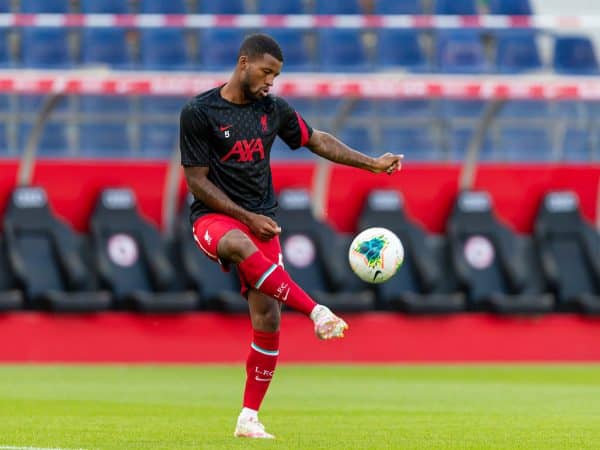 From Spain, the details are slightly different.

Sport agree that talks are imminent, but say that Wijnaldum is extremely keen to join Barca and he will press the Reds to allow him to move.

They say the relationship between player and club is ‘not in the best moment’ and that contract talks have entirely broken down.

Moreover, Sport claim Liverpool have put a €17 million price tag on the midfielder (£15.5m) and Barcelona don’t want to go that high, as he’s available on a free transfer next summer.

Clearly, there are agendas at play on both sides here as usual, and Barca are largely in the same situation as the Reds when it comes to wanting to buy a relatively older player with a year left on his deal for as little as possible.

It wouldn’t be an enormous surprise at this stage if the two deals eventually went through for very similar numbers – but who agrees to move first will be key, and it could yet go on a while longer with the start of the season fast approaching and the transfer window extended significantly.