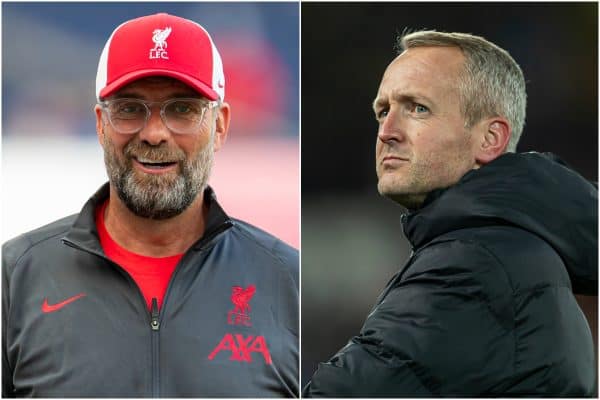 Liverpool will take on Blackpool in their final warmup friendly of pre-season, with Neil Critchley‘s League One side visiting Anfield for a 3pm kickoff on Saturday.

The Reds have already sealed a 3-0 win over Stuttgart and a 2-2 draw with Salzburg this summer, before drawing 1-1 with Arsenal in a Community Shield tie the Gunners ultimately won on penalties.

But with the Premier League not due to begin until September 12, when Liverpool host Leeds United, the club were eager to organise one more friendly.

Critchley, who left his role as under-23s manager in March, has stepped up to fill the role of opposition, leading Blackpool to Anfield this Saturday, September 5.

Liverpool confirmed the fixture on Wednesday afternoon, with the game to be played behind closed doors at Anfield, and shown live on LFCTV with kickoff at 3pm.

It is the first time the Reds have played Blackpool since 2011, when Charlie Adam was among the scorers as the Tangerines secured a second consecutive 2-1 victory over Roy Hodgson’s side that season.

Blackpool suffered relegation from the Premier League that season, and have since slid further down the Football League pyramid, with Critchley tasked with lifting them back up.

The 41-year-old was with Liverpool for seven years prior to his exit in March, and departed with the blessing of Klopp, who praised his ambition to become a first-team manager.

Critchley has only overseen three competitive games since taking over at Bloomfield Road, but did see his side hold Everton to a 3-3 draw in another friendly earlier in the summer.

He is likely to come up against a number of familiar faces, as with 12 first-team players currently on international duty, Klopp is set to field a mixed side which could include the likes of Billy Koumetio, Curtis Jones and Harvey Elliott.

Fortunately for Klopp, the majority of his midfield and attacking ranks are still available, and he could use the fixture to fine-tune his new 4-2-3-1 formation.