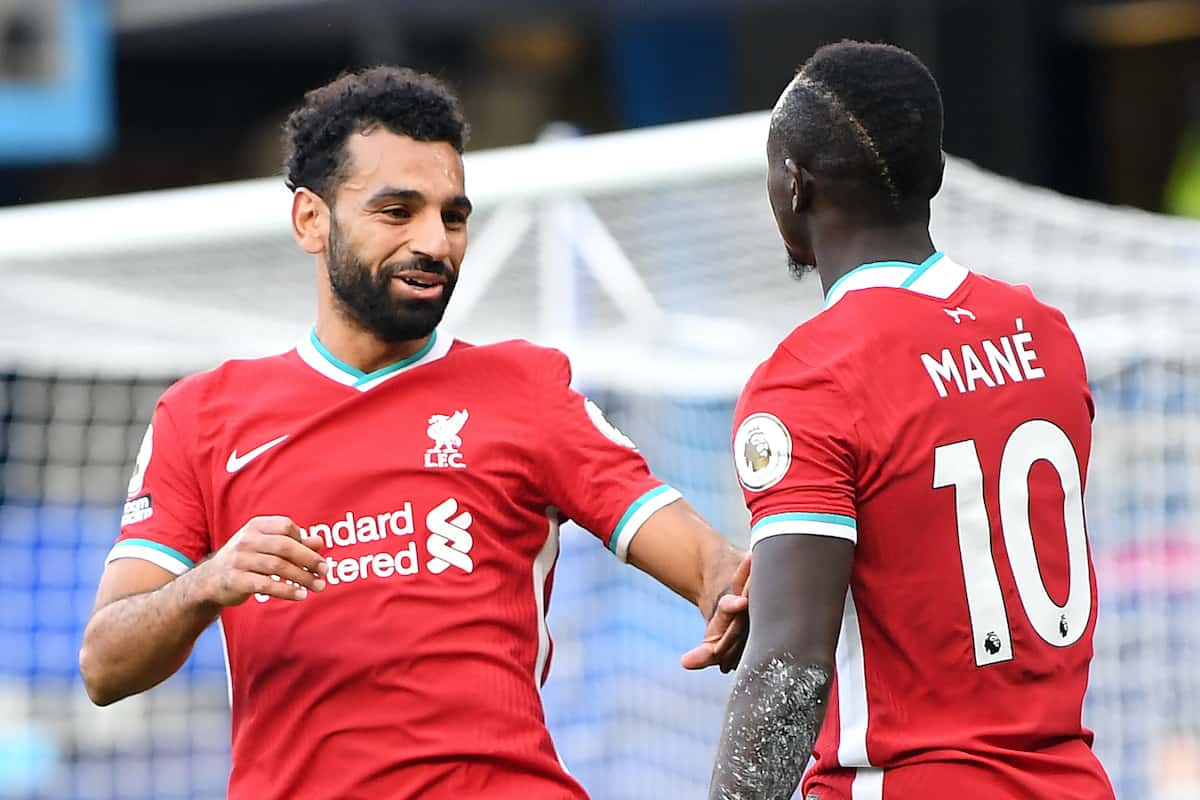 Liverpool saw off Chelsea with consummate ease at Stamford Bridge on Sunday, with several eye-catching statistics emerging from the 2-0 win.

The Reds were handed a tough test against a Blues side aiming big this season, but their superiority shone through from minute one.

Andreas Christensen was sent-off for a foul on Sadio Mane just before half-time and from that point on Liverpool never looked back.

Mane scored twice early in the second half to put the visitors in control, and while Alisson did have to save a Jorginho penalty, victory always felt guaranteed.

Thiago‘s eye-catching debut from the substitutes’ bench earned plenty of column inches, not least because the Spaniard broke a Premier League record, completing the most passes (75) in a 45-minute spell since records began in 2003.

That wasn’t the only intriguing stat on show, however – here are five more that stood out on a successful afternoon for Jurgen Klopp‘s champions.

Mane has been one of the undoubted superstars of the Klopp era and his impact was enormous again on Sunday afternoon.

The Senegalese bagged his first goals of the campaign and in the process ensured that his record in the Premier League is actually better than Cristiano Ronaldo.

Both players have now made a total of 196 appearances in England’s top flight, but Mane has 86 goals to his name, compared to Ronaldo’s 84.

It highlights just how special Liverpool’s No.10 is, especially when you consider how unplayable Ronaldo was in a Man United shirt for several years.

Jamie Carragher has hinted that Mane could eventually overtake John Barnes on the left wing in an all-time Reds XI – that might be a good prediction.

Klopp has masterminded another strong start to the season, allaying fears that Liverpool would fall away after their title-winning heroics.

Sunday’s victory means the German has now reached 400 points in the league, as his legendary spell as manager continues.

To sum up Klopp’s brilliance, he is the fastest Liverpool boss to reach that milestone, taking just 184 matches to do it, at an average of 2.17 points per game.

Remember when the naysayers were comparing Klopp’s record with Brendan Rodgers, using it as a stick to beat him with? Life comes at you fast!

There was a time when Liverpool fans feared the opening few games of the season, often dropping points and immediately giving themselves ground to make up in the title race.

A defeat at Tottenham on the opening day of 2009/10 springs to mind, as does a deeply frustrating draw away to Middlesbrough in 2005/06 – a season that saw the Reds draw four of their first five matches.

Under Klopp, however, Liverpool have become ruthlessly efficient starters, beginning with a bang and putting pressure on their rivals.

Sunday’s win means the champions have now won their opening two league games three years running – something that has never happened before at Anfield.

Alisson has been an unbelievable signing for Liverpool, standing out as one of the world’s leading goalkeepers.

If there has been one slight weakness, though, it has been the Brazilian’s inability to save penalties, as shown during last month’s Community Shield defeat to Arsenal.

When Jorginho stepped up on Sunday, there was no great confidence in Alisson keeping it out, especially as the Chelsea midfielder was yet to miss for the Blues.

Liverpool’s No.1 got down quickly and saved Jorginho’s effort, however, recording the first penalty save of his Reds career, admittedly having only faced three in normal time.

From the moment Thiago first touched the ball against Chelsea, he was a joy to watch.

It brought back memories of Xabi Alonso’s debut at Bolton in 2004, when the Spaniard ran the show from midfield, albeit in defeat.

As mentioned, Thiago broke one record in his first outing, but his performance was about much more than short-range passes and playing it safe.

? More successful passes (75) in 45 minutes than any Chelsea player managed in 90

? The most ever by a Premier League player who played a maximum of 45 mins

? His 10 long balls are now the most by an outfield player this season

The 29-year-old completed 10 long balls overall, which is the most by any outfield player in this season’s Premier League so far.

Granted, Chelsea were down to 10 men when he came on – there will be sterner examinations ahead – but the early evidence suggests Liverpool have signed a sensational footballer.