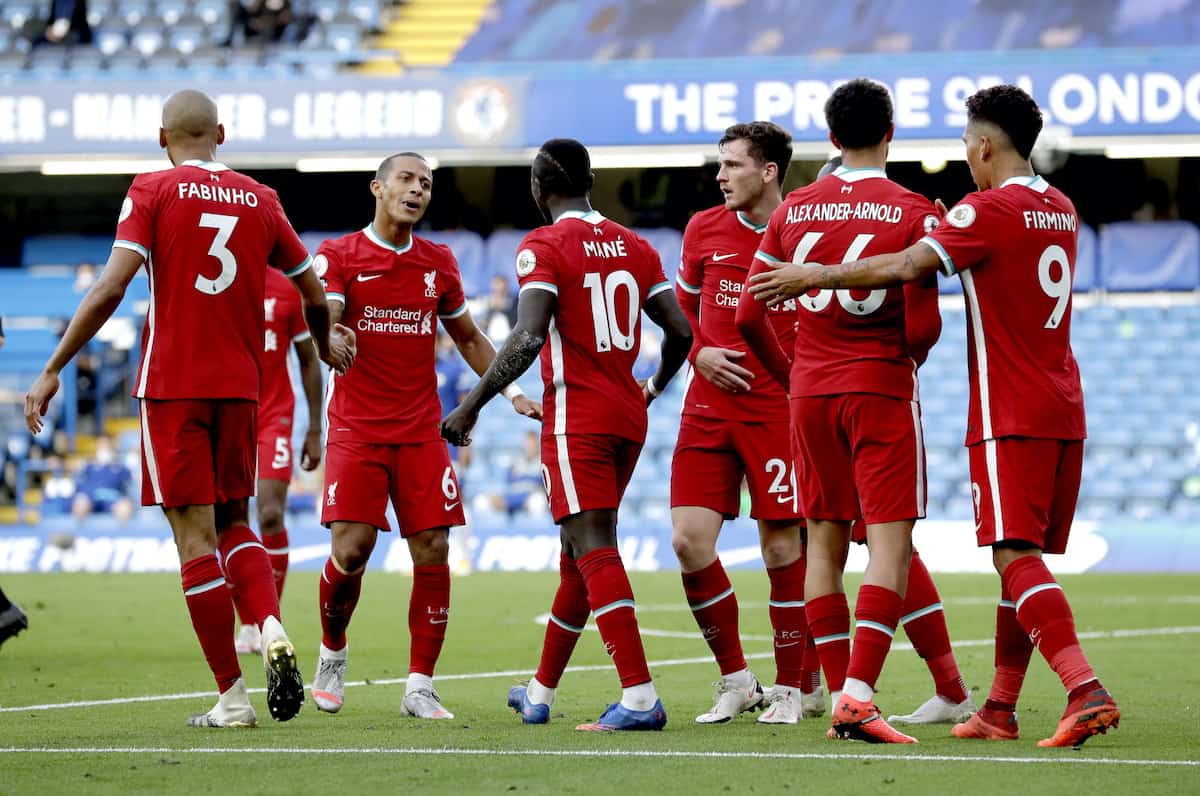 Liverpool cruised to a 2-0 win thanks to two second-half goals from Sadio Mane, and there was plenty to celebrate for fans after the final whistle.

The Reds were out to start their 2020/21 season with two successive victories, with Chelsea the opposition, and it was mission accomplished for Liverpool.

In the opening half, Jurgen Klopp’s men had the lion’s share of possession but struggled to create a clear opening on goal, but when they did, thanks to the vision of Jordan Henderson, Andreas Christensen saw red for the hosts after locking Sadio Mane into a rugby tackle.

While Chelsea came out from the break with 10 men, Liverpool returned with Thiago – with the new No. 6 given his debut just two days after signing, replacing Jordan Henderson.

And within nine minutes of the restart, Liverpool were two goals to the good thanks to the efforts of Sadio Mane, with a sumptuous header preceding a fine piece of pressing.

The lead would be preserved thanks to Alisson’s penalty save, clinching another three valuable points and a clean sheet.

Sadio Mane – makes a mistake but then reacts to it and gets a goal. What a baller.

I’ll say it again. Mané best player in the League.

What I love about Mane is he started all this, he came to us when he had (at the time) better options. He made the best choice and epitomises everything we are about now. #LFC

There's nobody in world football that I'd swap Sadio Mane for. World class.

Last week was the Mo Salah show, this week is Sadio’s turn

There was, of course, plenty of excitement for Thiago’s mesmeric debut…

“How good is Thiago? Never trained with these guys, slips in like a hand in a glove.”

There are going to be bigger challenges, harder moments in the future. But it’s the manner of Thiago’s passing that you notice. One touch, the ball is away as soon as he gets it. Class oozes out of him ?

Tell you what, Thiago is making noises come out of me that haven’t for a good few years.

Thiago has now completed more passes than any Chelsea player

Incredible how at home Thiago looked having only signed two days ago. Slotted in seamlessly: pulled the strings, dictated tempo, stretched play. Completed more passes than any Chelsea player despite coming on at HT. Looked like he’d played in this team for years. What a player.

75 – Half-time substitute Thiago completed more passes (75) than any Chelsea player managed in the entire match. Since full passing data is available for the Premier League (2003-04), his 75 successful passes are the most by a player who played a maximum of 45 minutes. Control. pic.twitter.com/UvHfrw1ggN

While there is rightly concern at centre-back, Fabinho more than stood up to the occasion…

I knew CB was a problem area for #LFC but I didn't expect it to rear it's ugly head in game week!?

Game week 2? They say it's minor but #LFC have history of playing these down. No wonder CB rumours have come through this week.

It's rare that both Gomez and Matip are fit at the same time, so Fabinho is almost third choice centre back for Liverpool. It's not ideal.

Fabinho has been so good here, such an intelligent player.

Fab is a fucking sensation

Fabinho doesn't have speed but the timing of his tackling is top quality.

Fabinho is an incredible CB. He gives me VVD levels of calmness seeing him play there.

They’ll give Mane MOTM, but it’s been Fabinho.

MOM Fabinho. You can see why Kloppo calls him The Lighthouse #lfc

What a win. I feared frustration with 11 against 10 but Liverpool quickly put Chelsea to the sword and totally controlled the game. Fantastic penalty save from Alisson and an outstanding performance by Fabinho as a stand-in.

Joyous few days for the Reds.#LFC

Liverpool were exceptional there in that second half. Think Lampard played into their hands with that midfield selection and then trying to play safe with 10 men. The game was gone by the time he tried to change it.

The best part of today’s performance was that we really performed like the Champions today. I’ve not seen us do that since we were confirmed as Champions but we really were different gravy today. A perfect performance and a perfect result.

That's just about as straightforward as trips to Stamford Bridge come.

Performance of champions. Fabinho simply imperious. He was everywhere and his positioning nullified any threat Chelsea had. Also Mane, what an athlete and fighter he is. Incredible stuff #CHELIV #LFC

Brilliant win that. Played like champions, bossing the game from start to finish. 6 ahead of City already!#LFC

That was a really arrogant win by Liverpool.

Reality check for a few expecting (hoping?) for LFC to drop standards this season…