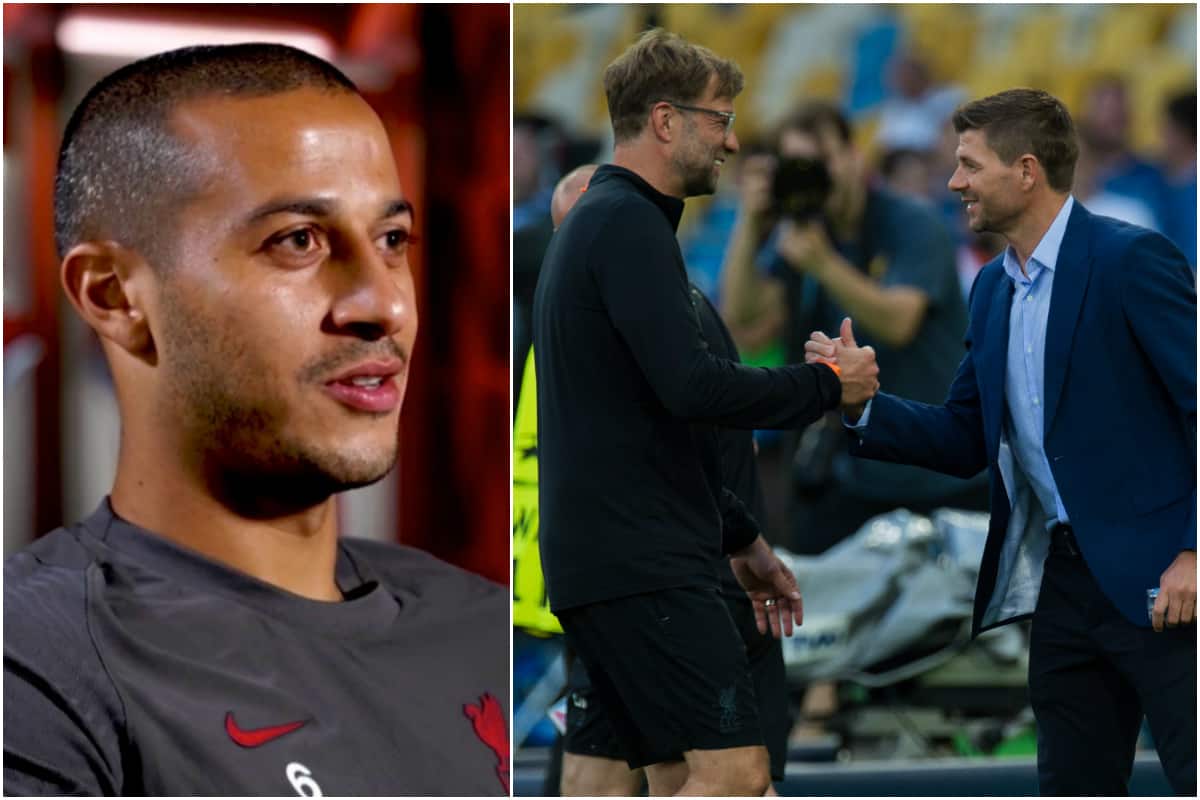 Steven Gerrard admits Liverpool signing Thiago gives him “butterflies,” while Carlo Ancelotti, who managed the midfielder at Bayern Munich, joked he was ‘heartbroken’.

Thiago‘s £25 million move from Bayern to Liverpool is one of the blockbuster signings of the transfer window, making Jurgen Klopp‘s side title favourites again.

The 29-year-old could make his debut as early as Sunday, and the trip to Chelsea, but he is more likely to wait until next week for his Reds bow.

Until then, supporters will be left to await his first touches in a Liverpool shirt, and among those will be Gerrard, despite his allegiances now lying with Rangers.

Speaking at his pre-Hibernian press conference on Friday, the legendary No. 8 spoke about respective deals for Thiago at Liverpool and Gareth Bale at Tottenham, and admitted he had “butterflies” about the Spaniard.

“To be honest with you, I’m more excited about Thiago,” he said, when asked about Bale’s return to the Premier League.

“He’s the one who’s got me with butterflies in my stomach, my focus down there is Liverpool, not Tottenham.”

The significance of Thiago‘s switch to Merseyside was apparent as a number of other managers were questioned on the deal in their press conferences.

This included Ancelotti, ahead of Everton‘s clash with West Brom on Saturday, with the Italian well-placed to comment as manager of Liverpool’s rivals and having called upon the player 47 times while in charge of Bayern.

“Thiago is a friend. He is a fantastic player, a fantastic midfielder. I had the luck in my career to train top, top players and Thiago is one of them.

“The only good thing about this signing is that he is a neighbour and that’s it. I think he chose the wrong team. He could choose the blue team, not the red team.

“I am joking. He is a fantastic player and my friend, Jurgen, will be happy. Yes, this signing breaks my heart.”

Another of Thiago‘s previous managers who gave his views on the move on Friday was Pep Guardiola, who took his countryman to Bayern from Barcelona when he took over at the Allianz Arena in 2013.

Guardiola claimed that Man City did not consider a move, but added that he is “happy that Thiago has come to England, because England is going to enjoy a really good player.”

Strangely, he did not mention the fact Liverpool have bolstered their squad immeasurably by bringing in a player who, according to The Athletic, found his time under Guardiola “too intense.”

“They had a good professional relationship but as with many players under Pep’s management, the experience together was too intense,” a source close to Thiago explained.

“Very, very few go running back to him.”

This is certainly Liverpool’s gain, and the reaction of both Gerrard and Ancelotti reflects the feeling on Merseyside—this is a game-changing signing for the Reds.