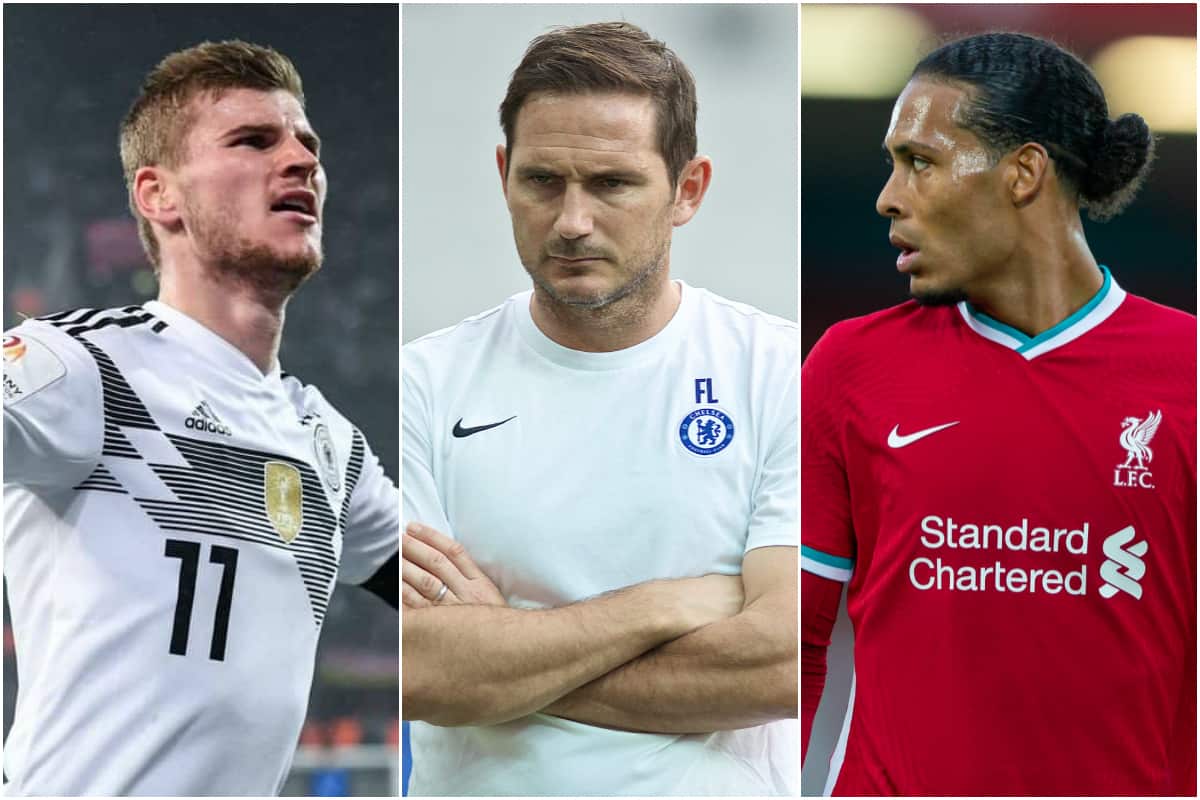 Frank Lampard said there is “no point in doing the maths” as he compared Liverpool’s spending to his Chelsea side, and the numbers show why he wouldn’t want to.

In a delayed response to Jurgen Klopp‘s explanation that the Reds cannot compete with the likes of Chelsea in a warped transfer market as they are not “owned by countries or oligarchs,” Lampard insisted he was “slightly amused.”

“You can go through the Liverpool players: Van Dijk, Alisson, Fabinho, Keita, Mane, Salah, incredible players, that came at a very high price,” he argued.

“So Liverpool have done it, and they’ve done it over a period of time.

“What we’ve done is come off the back of a ban, probably tried to address the situation ourselves to help improve us.

“So I think it’s par for the course, and I think we all know that there’s no point in doing the maths too much because I think we know that Liverpool have spent at a high level.”

Lampard’s claim was, essentially, that spending over £200 million on Kai Havertz, Timo Werner, Hakim Ziyech, Ben Chilwell, Thiago Silva and Malang Sarr this summer, with more to come, was due to their previous, enforced inactivity.

All credit to the Blues for giving Lampard the tools needed to catch up after finishing 33 points behind the champions last season, but to state that the two clubs’ spending was similar is laughable.

Liverpool’s approach under Fenway Sports Group has almost exclusively been sell, or achieve, to buy; rarely do the owners pump their own money into the club for signings.

In the last 5 years, the 20 Premier League clubs have benefited from £1.9 bln net financing with most of the money coming from their owners £1,569m (81%) and another £366m (19%) sourced from banks. However, there is a big difference between business models at individual clubs. pic.twitter.com/lcBHAH5s6I

This was highlighted by financial analyst Swiss Ramble in another intriguing Twitter thread on Monday morning, assessing club finances in the Premier League between 2014/15 and 2018/19.

Straight off the bat, the standout figure is that Chelsea (£433m) are behind only Tottenham (£521m) in terms of money in and out from owners and banks, with this £376 million more than Liverpool (£57m).

No club received more from their owners during that period than Chelsea (£440m), which is significantly more than the second-highest, Everton (£299m), with Liverpool (£75m) sitting eighth.

Focusing on Chelsea and Liverpool in particular, Swiss Ramble explains that the Blues “have been reliant on funding from Roman Abramovich for many years,” and that while funding had dropped between 2014 and 2018, it was back up to £247 million in 2018/19.

#CFC have been reliant on funding from Roman Abramovich for many years, so it is no surprise they have the highest owner financing in the PL with £440m loans (reported in the holding company, Fordstam Ltd). Annual funding had been falling, but was back up to £247m in 2019. pic.twitter.com/XoVeFov00c

FSG provided a £109 million loan to fund the expansion of Anfield’s Main Stand, but it is explained that £30 million of that has already been repaid, with interest payments taking that down further.

FSG provided £109m loan to fund Anfield Main Stand expansion, but club has since repaid £30m. Loan originally charged interest (estimated as £5m in total), though has been interest-free since 2019. Also made £11m debt repayments and £7m interest payments on bank loans. pic.twitter.com/LfBbza5foc

Liverpool have grown significantly during that period, particularly in a commercial sense, and their performances on the pitch have aided this.

This has come with a decidedly low net spend, with the signings of Alisson (£65m) and Virgil van Dijk (£75m), for example, paid for with the £142 million sale of Philippe Coutinho to Barcelona in 2018.

Chelsea, to their credit, have also recouped sizeable fees for Eden Hazard (£130m) and Alvaro Morata (£58m) in recent years, but it is rare that their spending is funded wholly by sales.

It seems as though Lampard is taking a reductive and literal view, more akin to a conversation in a pub, pointing out that Liverpool have spent money to bring in the likes of Van Dijk, Alisson, Fabinho, Naby Keita, Sadio Mane and Mo Salah to finally clinch the title.

But the reality is that, unlike Chelsea, their spending is covered by earnings, rather than loans from their oligarch owner Abramovich.

The Chelsea manager may not want to “do the maths,” but fortunately there are others who are more than willing to do so, and Swiss Ramble’s run-through has given an example of the financial gulf between the champions and their challengers.

To put it simply, one club was unwilling to finance a deal for Werner due to concerns over their spending, while another didn’t think twice to add him to a stacked attack.