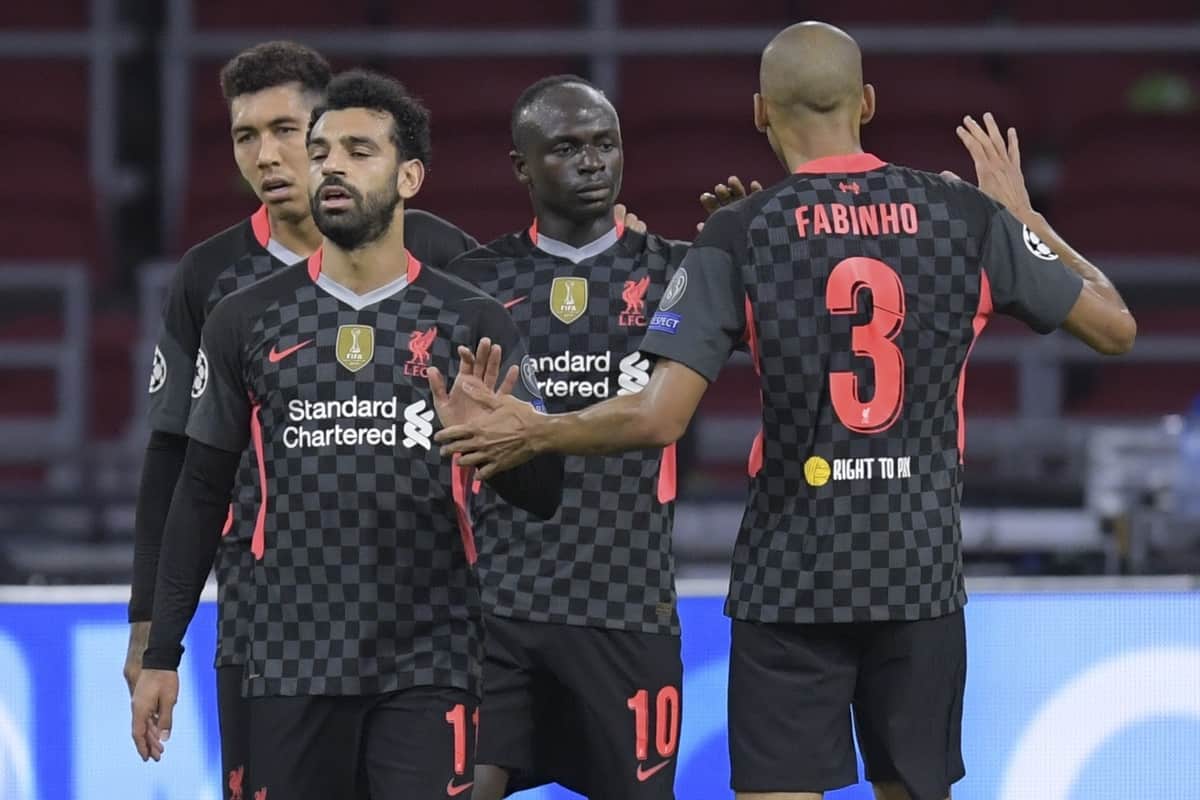 Liverpool returned to the Champions League with a hard-fought win in Amsterdam, with an own goal giving the Reds a 1-0 win over Ajax.

Cleared the ball against Joe Gomez and then Dusan Tadic in the opening 15 minutes, then made a big save with his feet to deny Quincy Promes.

Another decent save after the break and he took some high balls well, growing in confidence and stature as the game went on.

Not in his best run of form. Didn’t really get forward to much effect on the night.

Defensively he was more solid than has been the case at times in recent games.

Two great early tackles in the area, then one inch-perfect bicycle-kick clearance off the line. All in a half’s work for big Fab.

Almost scored with a great header after the break. Loads of second-half challenges, clearances and a few powerful runs into the midfield zone, too.

Made several important headers and clearances from inside the area, but didn’t always get great distance on them. A step forward after recent inconsistency.

Doing the job was the most important thing and although a bit more refinement might make us feel better when watching, he didn’t put a foot wrong after the early mixup with Adrian.

Always galloping down the flank, getting beyond Sadio Mane, James Milner and everyone else to provide a cut-back or cross.

A couple of times looked as though he would be our best route to goal in the second half, if only there was any kind of a finishing touch at all from those wearing black/pink/checked weirdness.

Was mostly the holding man in the first half but a few times just decided to shift gears and roar forward – and took the team with him when he did.

When he was actually moved into the more offensive role at half-time, however, he went into away-days Gini mode and wasn’t particularly aggressive at getting forward…until the 85th minute or so.

Then he was sprinting into 60 yards of space every time he got the ball.

Can tell he hasn’t played too much this season with some of those touches and passes!

Hard work and all the rest of it, but he typified much of the overall performance with being somewhat out of rhythm and lacking the refinement of touch when it mattered.

Given a big chance in Europe, but was a little subdued and on the fringes of the action.

Moved right side when the Reds switched to four across midfield in the first half, but was subbed at the break.

It’s a good job he’s very, very, very good, isn’t it? Too often it seemed the Reds had no real route into the box other than when Mane ran the channel.

Created the goal with a fantastic spin, brilliant piece of acceleration and a horribly miscued shot which was diverted in. They all count.

A first half of almost getting in for Mo, who was closed down quickly whenever a half-sight of goal presented itself.

Subbed on the hour with the other front two.

All the usual running and work rate, but the flicks and passes didn’t really come off. And stop doing it on the edge of your own box, Bobby!

A bit like watching a more exotic Paul Dickov, to be honest.

On at the break, tidy and good on the ball, not overly ambitious in his forward runs.

Found the spaces and nice link-up play. Should have scored.

Half exciting, half frustrating. A big threat on the break but took too long to pass or made the wrong call on the counter.

Not too involved, most of our attacks went left.

Won a big midfield header in the Champions League!

Spent most of the first half fuming and raging at his players for not passing, not pressing, not really doing much of anything.

Presumably had already decided in advance to only play the front three for an hour, so was interesting to see him stick to the plan if so.

Job done rather than a spectacular Reds display.