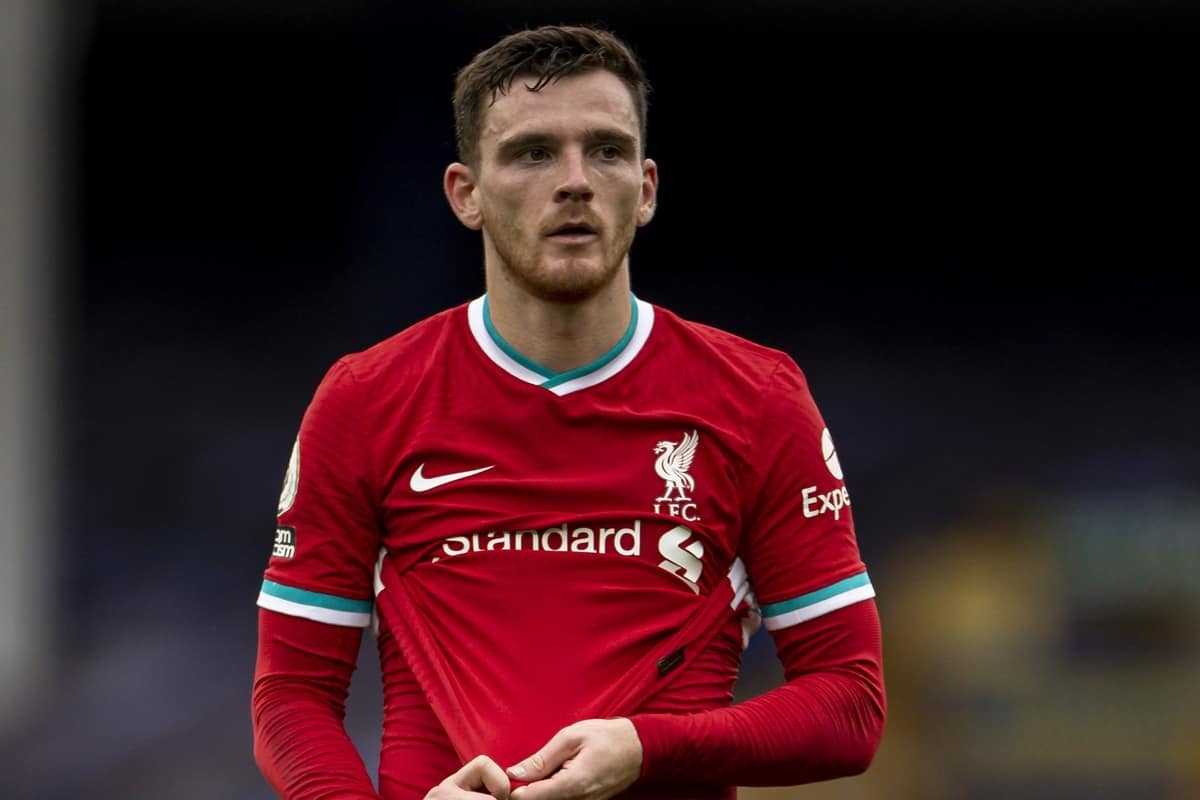 Andy Robertson believes the challenges from Jordan Pickford and Richarlison in the Merseyside derby were “shocking,” with the Liverpool squad clearly left fuming.

The Reds produced an excellent performance on their return to action on Saturday, outplaying Everton for the majority of the clash at Goodison, which was hugely encouraging after a 7-2 loss to Aston Villa last time out.

But Pickford’s early, unpunished tackle on Van Dijk, Richarlison’s red card foul on Thiago and a questionable offside call on Sadio Mane in the buildup to Jordan Henderson‘s strike in stoppage time left Liverpool with a point from a 2-2 draw.

It was an undeserved result, and once again the influence of the VAR was the main talking point after the game, along with what Robertson and the squad feel were “shocking” tackles from the Everton duo.

Speaking to LFCTV after the game, Robertson agreed that the impact VAR had on the game is “still just as difficult”:

“I looked when Thiago played the ball and I thought it could be [offside], it couldn’t be, but Hendo’s just scored the winner in the derby – so we thought – so you can’t not celebrate it.

“Then you just wait for the decision and obviously the ref took a long time, we knew it was going to be a close one, we know it’s sadly not going to go in our favour.

“Look, it is what it is, we move on from it. We probably needed a couple more minutes with the 10 men after the shocking challenge, and if we had a bit of time then maybe we would have nicked it.”

Robertson was asked about Pickford’s lunge on Van Dijk, which the squad fear could see him sidelined for a lengthy period, and while he admitted he hadn’t seen it, he argued that the situation was “the same as Richarlison’s”:

“To be honest, I never saw it. I just saw Virg going down.

“But the lads when they came in at half-time said it was a shocking challenge, so that’s two they’ve done us with today.

“I think it was already offside and they’d maybe called it, but for me it was the same as Richarlison’s. The whistle had already gone and he went flying in, it’s a red card.

“Honestly, I never saw it so I can’t comment, I can’t comment on if Pickford’s meant it or not, I think he’s an honest lad and I don’t think he would have.

“But it doesn’t look good for Virg and I hope he comes back as quickly as I can, and hopefully the scan maybe doesn’t show what the lads think.

“Losing a player like him is always tough, but from an incident like that, it makes it a wee bit tougher.

“We’ll all deal with it, we’ll all support Virg for however long he’s out – hopefully not long, like I said – and we’ll be ready to go again on Wednsday night.”

On social media, the silence from the majority of players was deafening, and most of those who did share their thoughts on the game hinted at their bemusement at the officials:

Hard to find the words right now… will leave others to explain it ???? Great performance from the lads!! #YNWA

Good team performance and a great Mo goal for number ?Plenty of other things to talk about but ? #ynwa

Crazy game ?. Well fought point today against a good team. Unlucky not to have come away with more #YNWA

Others, though, rightly highlighted the impressive performance Liverpool put in despite the conditions, with Gini Wijnaldum of the belief it was one that “deserved a win”:

This is a hard one to take. Today’s strong team performance deserved a win #EVELIV #MerseysideDerby

Tough result to take today… but great football, attitude and desire showed until the last minute from everyone! Keep it going Reds??? #YNWA

The Reds remain behind Everton in the table due to a share of the points, and now must turn their focus to the trip to Ajax on Wednesday night, which Robertson insists they will “be ready” for.

They will undoubtedly be without Van Dijk, though, and possibly Thiago too, with these scars from the derby ensuring the actions of Pickford, Richarlison, referee Michael Oliver and VAR David Coote won’t be forgotten quickly.