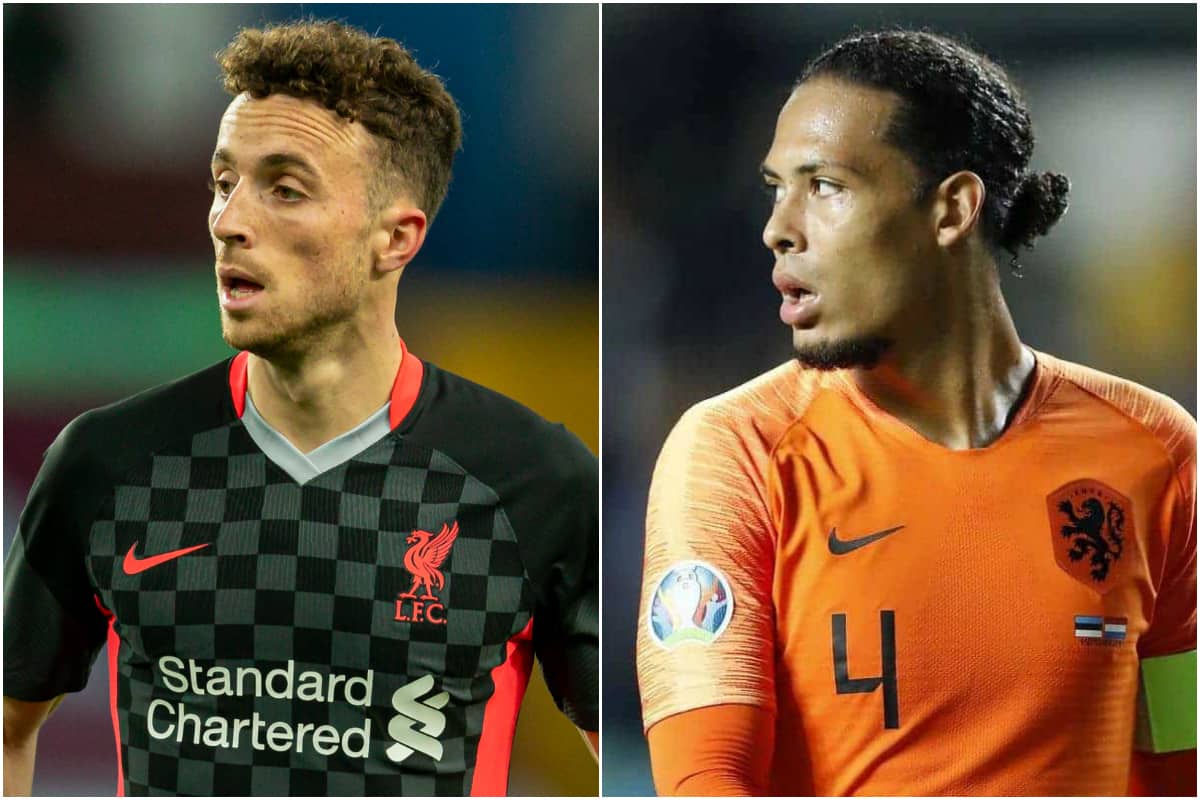 Diogo Jota impressed as a second-half substitute as Portugal were held to a 0-0 draw by Spain, on a frustrating night for Netherlands duo Virgil van Dijk and Gini Wijnaldum.

Wednesday saw the first of the October internationals played out across Europe, with the majority of those being friendlies.

Portugal hosted Spain in a game that saw 2,500 supported permitted to attend Sporting CP’s Estadio Jose Alvalade, with both sides enjoying big chances to score in a game that eventually ended goalless.

Cristiano Ronaldo and Renato Sanches both hammered Kepa Arrizabalaga’s crossbar with near-identical efforts, while at the other end Rodrigo missed the target with a curler and Dani Olmo was denied by Rui Patricio.

Jota was sent on in the 79th-minute as a replacement for Barcelona winger Francisco Trincao, and occupying his natural left-sided role the Liverpool No. 20 looked sharp throughout his cameo.

The 23-year-old even produced one of the moves of the game in stoppage time, receiving the ball with his back to goal and nutmegging Diego Llorente with a flick before charging towards the penalty area.

His effort was ultimately blocked by Sergio Ramos, and the resulting corner should have ended with a winner for Portugal has Joao Felix somehow missed Ruben Semedo’s header at the far post.

Jota is likely to start as Portugal make the trip to France for the UEFA Nations League on Sunday, and will be looking to make more of an impact at Stade de France.

Elsewhere on Wednesday night, Van Dijk and Wijnaldum both started as the first game of Frank de Boer’s tenure as Netherlands manager ended in a 1-0 friendly defeat to Mexico.

Van Dijk was replaced by Nathan Ake at half-time, in a planned substitution, with the Man City defender giving away the penalty that led to the winner through Wolves‘ Raul Jimenez.

Shortly after that goal, Wijnaldum was also brought off, with De Boer likely saving his key players for UEFA Nations League clashes with Bosnia & Herzegovina (Oct 11) and Italy (Oct 14).

Taking to Instagram after the game, Wijnaldum described the game as a “good opportunity for us to learn”:

Good opportunity for us to learn tonight. The work continues, we move on to the next ?? #NEDMEX ?? ??

Thursday brings a busy day for Liverpool’s internationals, starting off with friendlies for Harvey Elliott and Billy Koumetio as the England under-19s take on Scotland and the France under-19s face Germany.

Andy Robertson will captain Scotland in their Euro 2021 qualifier against Israel later on, with Marko Grujic‘s Serbia facing Norway in another qualifer at the same time.

Caoimhin Kelleher and Divock Origi will hope for minutes with the Republic of Ireland and Belgium respectively, while England vs. Wales could see six Reds pitted against each other.

Joe Gomez, Trent Alexander-Arnold and Jordan Henderson are all in the England squad, with Neco Williams, Harry Wilson and Ben Woodburn representing Wales at Wembley.