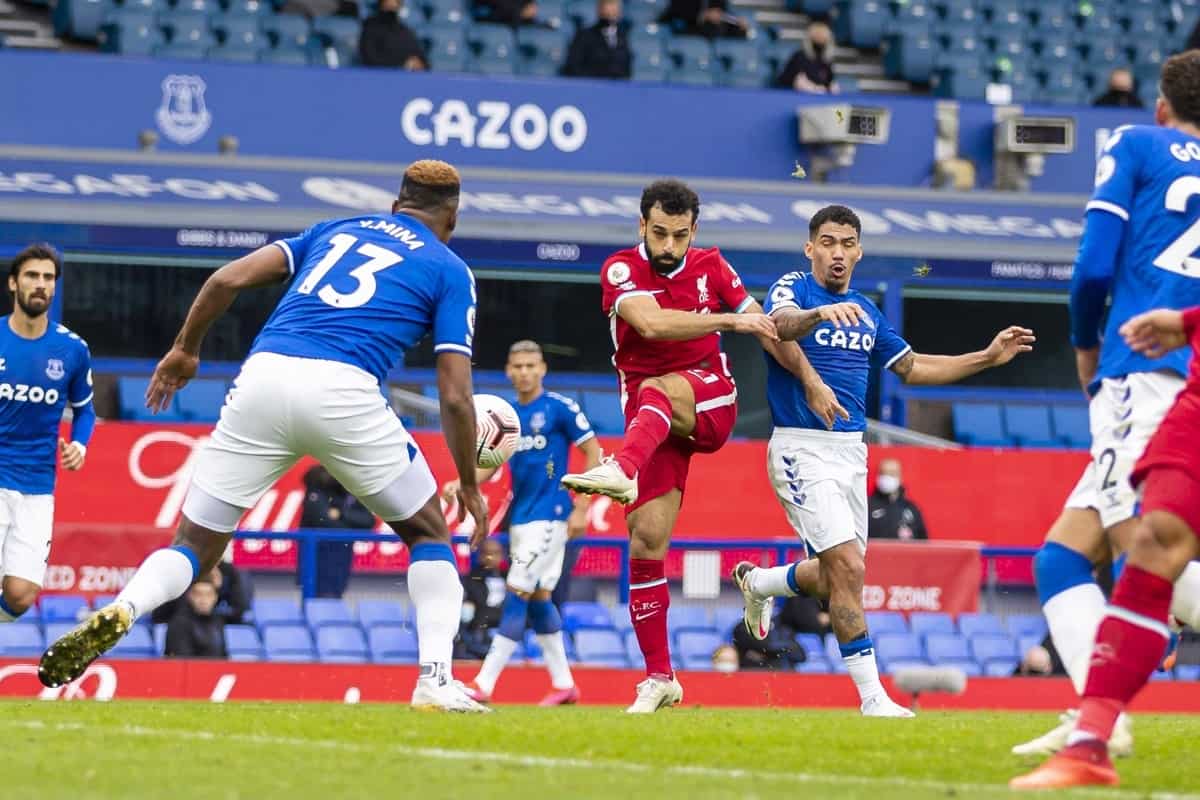 Liverpool were held to a 2-2 draw in a controversial Merseyside derby at Goodison Park, with Mohamed Salah hitting his century and Everton ending with 10 men.

In a strange derby played behind closed doors, Klopp urged his side to respond to their hiding at Villa Park and, having made four changes, was rewarded with a goal in the third minute through the returning Sadio Mane.

A shocking tackle from Jordan Pickford on Virgil van Dijk soon after should have led to a red card for the Everton goalkeeper and a penalty to Liverpool, but with VAR ruling Van Dijk offside England’s baffling choice as No. 1 somehow escaped punishment.

Van Dijk limped off as a result, with Joe Gomez taking his place having been left out of the side following a run of poor form, but either way Pickford’s challenge should lead to questions over the rulebook.

Questions continue over Adrian as stand-in goalkeeper, and the Spaniard could arguably have done better as Everton equalised on the 20-minute mark, with Michael Keane’s header going through his hands for 1-1.

An injury to Seamus Coleman led to a debut for centre-back Ben Godfrey at right-back and the Reds had the freedom of the left flank, with Mane almost scoring again from another low cross from Andy Robertson.

Liverpool certainly had the better of the half, but their dominance was ultimately undermined by a dreadful decision from referee Michael Oliver and his VAR.

The Reds’ control largely came in midfield, with Thiago providing a new dimension on his first start for the club, as a press-resistant, tempo-setting No. 8 alongside Fabinho and Jordan Henderson.

It was a game of attrition for the first half-hour of the second half, but it erupted out of nowhere with a 100th goal from Salah, blasting in casually from inside the penalty area to reach his century for the club.

Joel Matip had a great chance to make it 3-1 with a powerful header soon after, but Pickford was there to make a great reflex save to keep him out, with Klopp sending on Diogo Jota with 12 minutes left to play.

Everton were level not before long, though, with Dominic Calvert-Lewin towering above Robertson and sending a header into the bottom corner with Gomez nowhere to be seen and Adrian rooted to his line, diving too slowly.

The drama wasn’t over, with Richarlison sent off for another horrendous challenge on Thiago, and a late Henderson goal was then ruled out by VAR for offside.