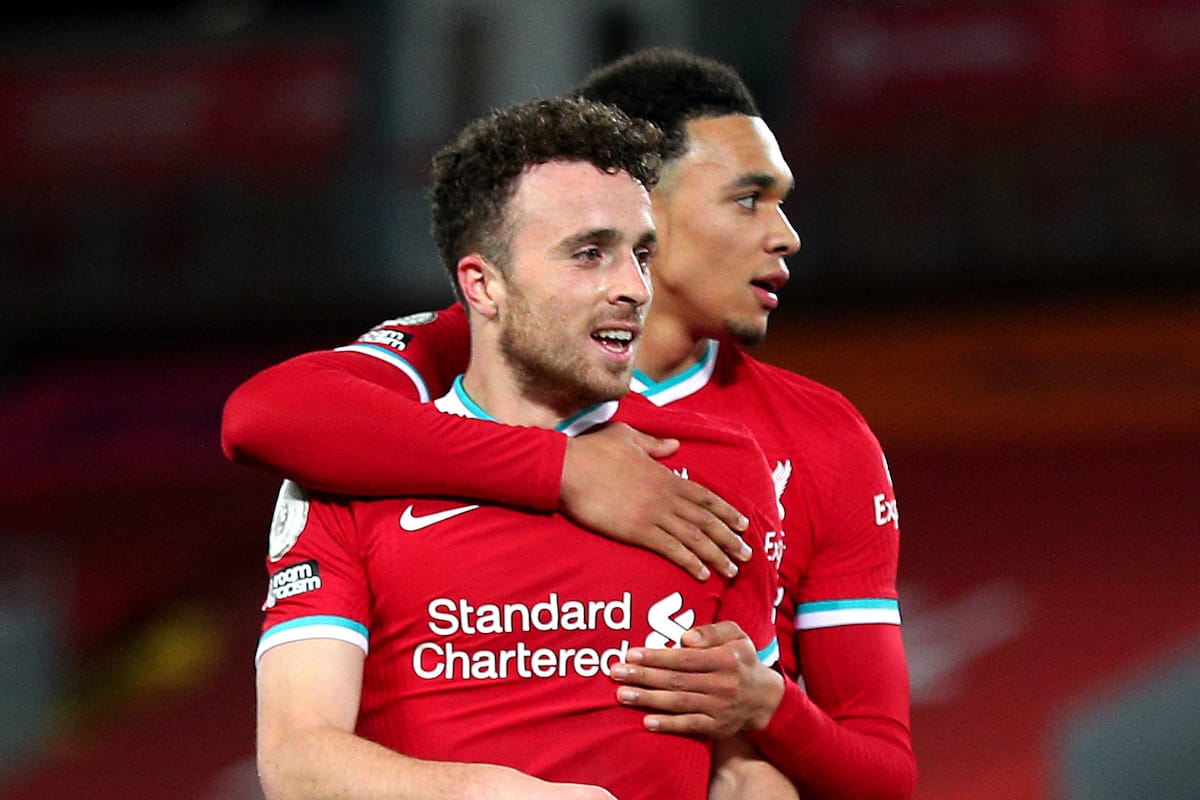 Diogo Jota has already made a solid claim to become part of a new Liverpool ‘Fab Four’ just five weeks after arriving at Anfield.

The Portugal international is averaging a goal every other Premier League game after his header in the 2-1 win over Sheffield United made it two in four since a £45million deal brought him to the club from Wolves last month.

He was deployed as the right-sided forward in a 4-2-3-1 system as Jurgen Klopp fielded all his main attackers together for the first time.

It conjured up memories of the manager’s original ‘Fab Four’ when Philippe Coutinho played alongside Mohamed Salah, Roberto Firmino and Sadio Mane before he joined Barcelona.

“It is not too much about what he’s brought in the team. He is a good player, that’s why we signed him,” said Klopp.

“The player he is: he is quick, he has the physicality, he is strong, he is good in the air, he is good on the ground… a lot of good things.

“He has exactly the quality we need, so that helps a lot.

“Yes, Diogo scored a super goal and was really involved in the game. He can be much better, 100 per cent, and that’s good news.”

The changed formation meant Salah was pushed into a central striking role with Firmino, their other goalscorer on the night, behind him and Mane in his usual left-wing position.

Klopp insists he did not change his tactics in order to shoehorn Jota into the team but that it was a reflection of the depth of options he had at his disposal.

“It was a game where all four played up front together (but) it was not so much about getting Diogo on the pitch because he can play a lot of positions in our usual formation,” said the manager.

“But it gives us an extra option. It brought Mo in a different position, where I have to say he played an incredible game.

“Mo and Sadio didn’t score but played outstanding. Sadio was, in the one-on-one situations, pretty much undefendable. Mo between the lines, sensational.

“And you know how good (Xherdan) Shaqiri was in Amsterdam (in the Champions League win over Ajax) and he is close; Taki (Takumi Minamino) is very close and so all these things help.

“This is the area where we have in the moment options and long may it stay like this.”

The success of that front-four combination helped turn around a game in which Sheffield United took the lead from a 13th-minute Sander Berge penalty after VAR had upgraded a Fabinho challenge on the edge of the area from a free-kick to a penalty.

Klopp disputed whether the tackle was even a foul, ignoring the margin for error on the millimetres involved for video assistant Andre Marriner to decide it was inside the area.

Firmino tapped home the equaliser just before half-time after Mane’s header was parried and Jota rose highest in the 64th minute to nod home the Senegal international’s cross.

While it extended Liverpool’s unbeaten home league run to 62 matches, one short of equalling the club record between 1978 and 1981, it also meant five defeats from six for next-bottom Sheffield United.

“It is not a losing culture. We don’t get to a position we have got to (a Premier League side) by continually losing games,” said Blades boss Chris Wilder, who was upbeat in defeat.

“I can take that performance all day. You have got to be relative in terms of who you are playing against.

“You are looking for players to stand up to the challenge of playing Liverpool and I thought everyone to a man did.”