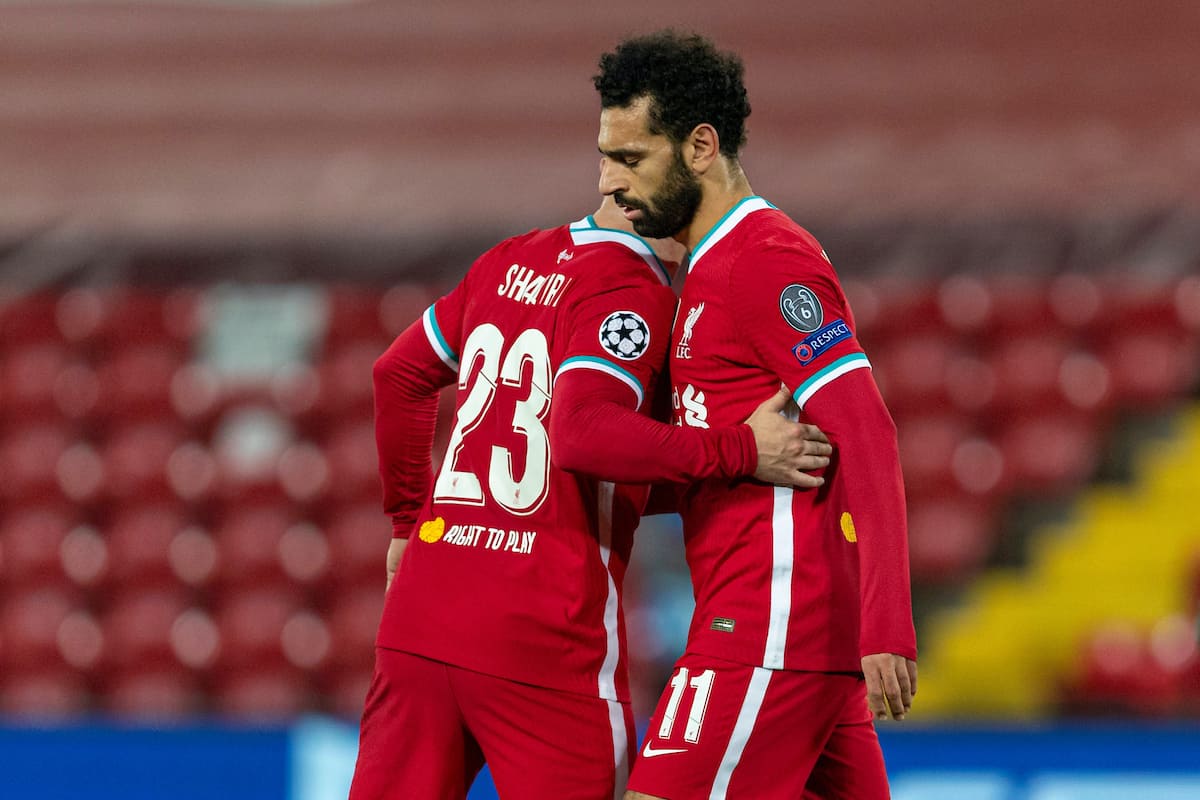 A lacklustre Liverpool beat Midtjylland 2-0 in the Champions League on Tuesday night, but an injury to Fabinho put a dampener on the result.

Jurgen Klopp made four changes to the team that won 2-1 at home to Sheffield United at the weekend, resting the entire front three.

The lack of world-class attacking quality showed, as the Reds performed poorly in the first half, barely creating a single good chance.

Evander could have equalised for Midtjylland and Roberto Firmino fired over with the goal gaping, before Mohamed Salah‘s stoppage-time penalty sealed the win.

Supporters weren’t exactly enamoured with the performance, despite the win…

Job done but one to forget perhaps. Maybe understandable given all the changes and injury to Fab. Jota strikes again looks a great signing #10000Goals

Another ugly win there. Poor for large spells. 3 points is sound though. Onto West Ham where my new mate Diogo will pop up with another goal

“They are not looking like champions of any kind. We should be putting these guys to the sword.”

That’s a win. Laboured game but another three points with a shuffled side. Trent’s passing tonight sublime, Gomez stepped up as the senior CB. Jota again ticking all those boxes. Stellar signing. #LFCdigest #UCL

Not a pretty one tonight but got the job done. Well done Rhys Williams.

We have to seriously look at the football schedule. Players aren’t going to be able to maintain performance levels and clubs will be littered with injuries #LIVMID #LFC

“Ugly performance overall, but…6 points from 6, and top of the group after Ajax and Atalanta draw.”

Yes The Reds. Another three points. A bit shite but another clean sheet in Europe ?

Minamino and Origi did not impress in the slightest…

Lets be honest Minamino and Origi were horrific

what really is the point of Origi? #LFC

I’m really trying to give Divock Origi a chance to prove me wrong but as harsh as it sounds, I think his time at Liverpool is over.

Fabinho’s injury is a huge concern…

I went on all summer, as many others did, saying that a fourth CB was a priority, especially given the crazy fixture list and Matip’s injury record. That was even without legislating for losing Van Dijk for the season. #LFC

It was clear from the starting XI that we weren’t going to see #LFC at their fluent best tonight, so you’d imagine Klopp will be happy just to get the points. No getting away from that Fabinho injury, though; even if it’s a minor one, surely they have to do business in January.

– Dutch on the forums.

Fabinho injury arguably one of the worst things that could possibly happen to this Liverpool side at the moment given the circumstances. Hammer blow.

Had just about made peace with the Van Dijk situation, because Fabinho & Gomez looked a really promising partnership. And then that happens. Grim.

Henderson Gomez centre back Saturday then. Unless Matip returns out of nowhere.

Ending on a positive, Trent was superb for the Reds…

Trent the highlight tonight. Having both FB’s on top form is entirely what we need right now, especially without Thiago or Keita’s creativity. Formation doesn’t look right still, but we’re really short of numbers in midfield.

Ugly, horrible win, but Trent was fantastic. What a footballer.

Trent Alexander-Arnold man of the match tonight by a country mile. Back to his absolute best.