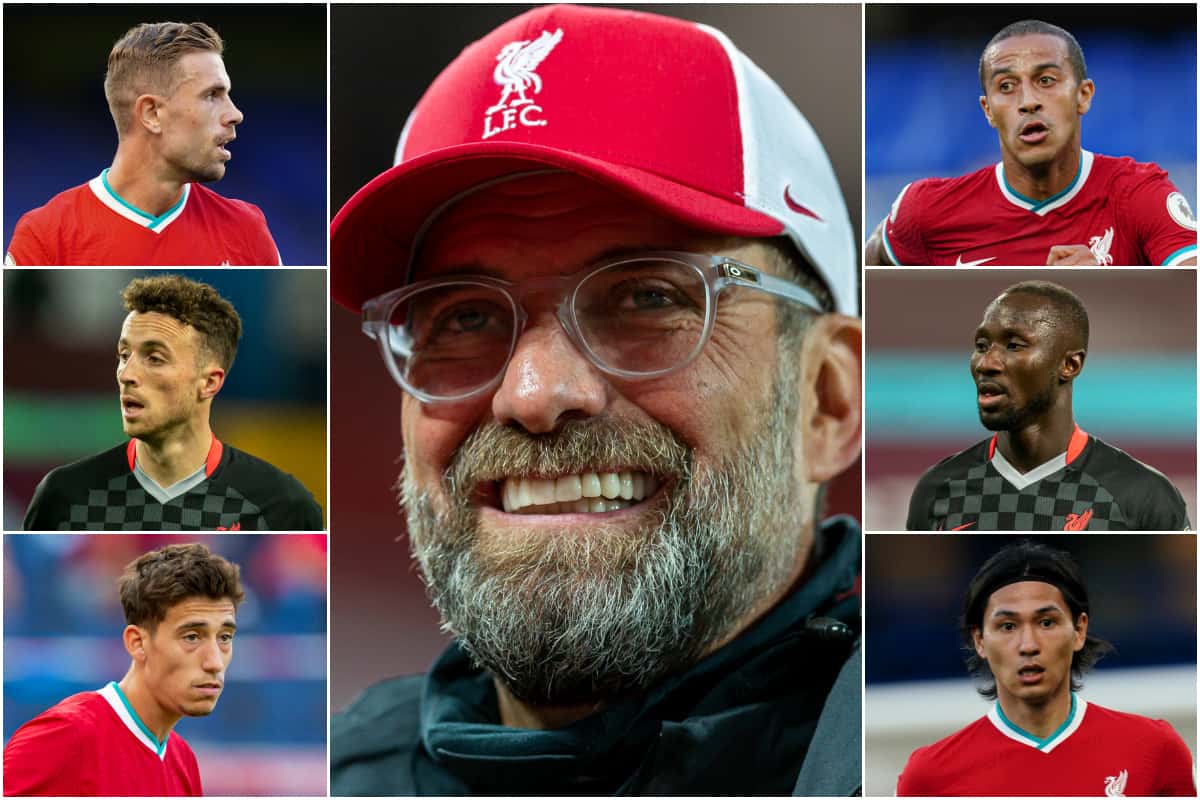 Liverpool’s successful transfer window has given Jurgen Klopp solutions in every position on the pitch, as this graphic of the Reds’ squad depth for 2020/21 proves.

Klopp was able to bring in three players to his first team over the summer, with Thiago, Diogo Jota and Kostas Tsimikas adding to January addition Takumi Minamino.

Dejan Lovren and Adam Lallana were the only major outgoings from the senior squad, which has seen the Reds build on the world-class squad that clinched the Premier League title last season.

While there are question marks over the decision to not replace Lovren in the transfer market, and whether Adrian is up to standard as Alisson‘s stand-in, there is now established quality in every backup position.

In many roles, there could be genuine competition for a starting place each week, such as in midfield where Thiago, Fabinho, Gini Wijnaldum, Jordan Henderson and Naby Keita will battle for three slots.

If Tsimikas settles and develops as expected, he could put pressure on Andy Robertson at left-back, while the club’s £45 million outlay on Jota suggests he could eventually challenge Sadio Mane for his spot.

Factoring in the likes of Minamino, Joel Matip, Alex Oxlade-Chamberlain, Curtis Jones and, having stayed beyond the end of the transfer window, Xherdan Shaqiri, there is real variety in Klopp’s ranks.

This is highlighted below, as we visualise the depth of the Liverpool squad for 2020/21: 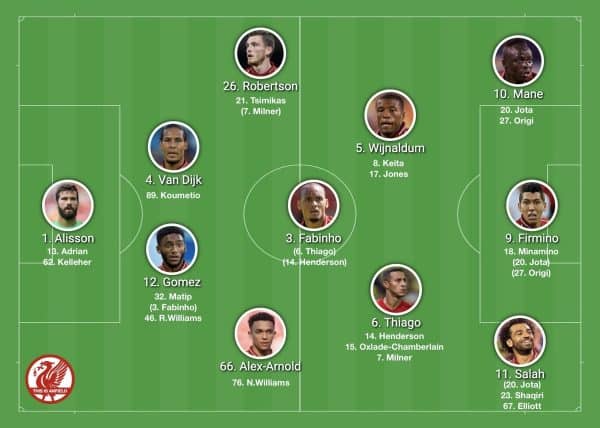 * This graphic is a representation of Liverpool’s possible starting XI; first-choice starters subjective. Players in brackets not in their ‘best’ roles, but able to deputise.

Alisson, Trent Alexander-Arnold, Joe Gomez, Virgil van Dijk and Andy Robertson are currently cemented as Klopp’s first-choice defence, with Fabinho a lock ahead of them.

And with Mane, Mohamed Salah and Roberto Firmino the go-to trio in attack, there are only two midfield positions routinely up for debate.

It is assumed that, when fit and settled, Thiago will be an undisputed first choice, while Gini Wijnaldum is the second most-used player in Klopp’s tenure as Liverpool manager, and a trusted starter who should keep his place.

But as the graphic shows, there are a plethora of other options, with Henderson considered by many as a guaranteed starter, while there is a case to argue Matip should take Gomez’s place and Keita’s form could see him oust Wijnaldum.

Then there are the youngsters, with Caoimhin Kelleher, Neco Williams, Billy Koumetio, Rhys Williams and Harvey Elliott all highly rated by Klopp and his staff, while Jones is already a genuine option for the starting lineup.

But if Koumetio, as the only other naturally left-sided centre-back in the squad, is required to stand in for Van Dijk at any point, and similarly Williams for Alexander-Arnold for an extended period, the resolve of Liverpool’s squad could be tested.

Adrian‘s struggles in place of Alisson have already outlined this as a possibility, but that is the balance Klopp has chosen to strike as he opts for a smaller, more tight-knit squad than many of the Reds’ title challengers.

Overall, though, it is clear that, perhaps more so than ever, Liverpool are well-stocked in every position, with not only those starting, but some of those on the bench too, rightly seen as world class.