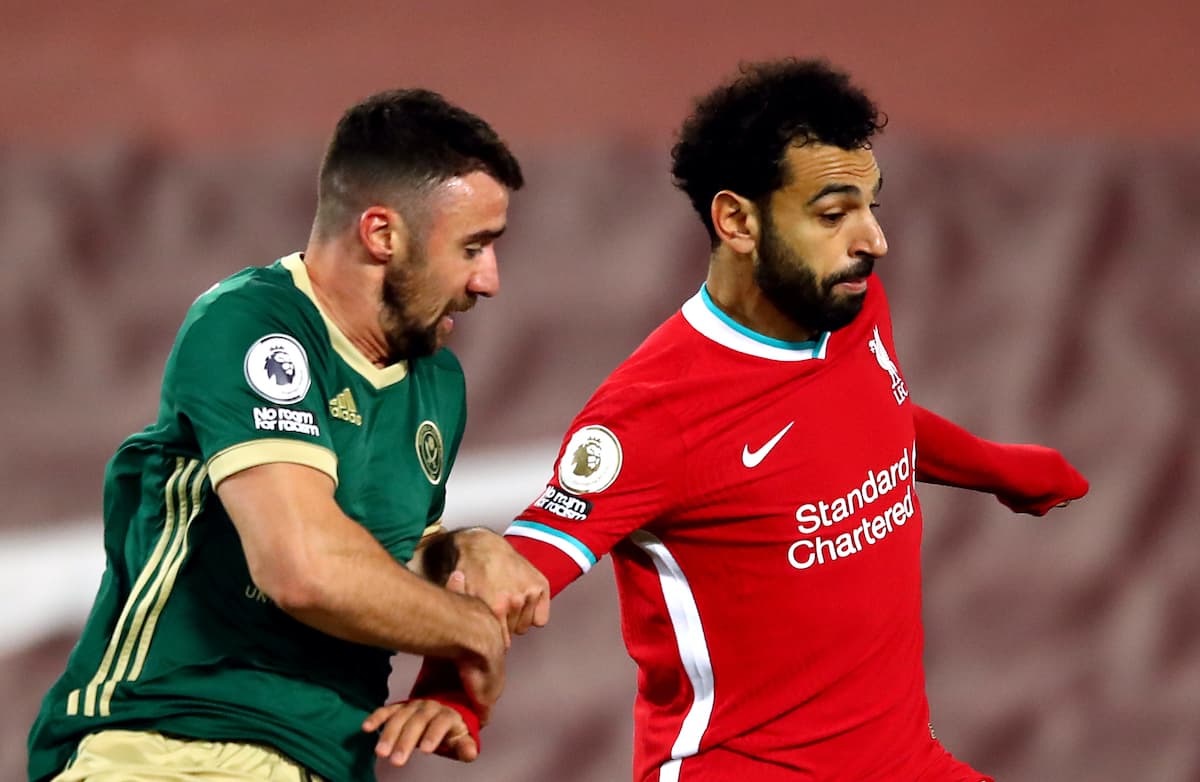 Liverpool were without luck once more but dug deep to overcome a stubborn Sheffield United side, with footballing karma surely to even itself out throughout the season.

Liverpool took three important points on Saturday evening, in a victory garnered through perseverance and hard work. A win that was played out in an empty stadium, shielded behind the obscenity of a locked PPV door.

In a wonderful display of disdain for the greed of it all, over £100,000 was raised for foodbanks in protest at spectators being expected to pay almost £15 a pop to watch the game. A magnificent effort made by all concerned.

On the pitch, Liverpool pulled off a reassuring sleight-of-hand, with the surprise early return to action of Alisson. It assisted Jurgen Klopp’s side in making a bright start.

Within the opening exchanges, Andy Robertson sent Sadio Mane away to provoke the first scare of the game, only to see the ball hurriedly cleared. A crunching challenge on Mohamed Salah later and Trent Alexander-Arnold was making Aaron Ramsdale back-pedal desperately, after a typically audacious attempt from a player who isn’t really out of form.

Alexander-Arnold is yet to hit the higher gears this season, but he will get there.

All the initial signs in this one were that Liverpool were intending to bounce through the game with stylish ease. This was similar to the fast start we made at Goodison. Then, just as against Everton, came a setback.

A penalty that shouldn’t have even been a free-kick, and a situation Fabinho found himself in due to an attempted clearance ricocheting straight back towards him, after a passage of head-tennis carried the ball into a dangerous area. Sander Berge converted.

Sheffield United used that gift as a springboard to make the rest of the first half an uncomfortable one.

It had been a bright start by Liverpool up to conceding. Oli McBurnie had a good chance, but the angle was tight and his route to goal was partially blocked. It only looked a dangerous moment because he skewed his shot across goal, rather than at it. Regardless, VAR (you would like to think) would have overturned any goal that might have resulted from the move.

Currently, there is a theme that Liverpool’s positive approach to football is being met with undeserved and negative events. The world’s best defender put out for the rest of the season when seeking to score, bright starts to games countered by goals against the run of play, or gifted penalties and VAR churning out erroneous decisions.

It’s all character building though, and footballing karma will even itself out over the course of the campaign if you work hard enough for it to happen. The trick for Liverpool now is to go for full-on tunnel vision.

Over two months until the transfer window opens yet football talking heads muse whether Jurgen Klopp should be buying a new centre back. One week is a long time in football, yet here we are being told the Liverpool manager needs to do something that is beyond his control for at least another ten weeks.

In the immediacy, what is more important to Liverpool’s season is gaining as much control as possible over the things they can dictate, as opposed to brooding on the events they can’t. It is painful to lose the services of Virgil van Dijk, but this is out of our control, so finding a solution to his absence, using what is at our disposal, is the only option.

In terms of the fixtures we contest, if we concede a goal against the run of play or a questionable penalty is awarded and VAR turns a blind eye, or even takes it upon itself to overrule the on-pitch official and perplexingly give one, then we simply respond with our superior brand of football and put trust in our abilities to overturn unwarranted or unfortunate situations and deficits.

Ultimately, this is what we did on Saturday evening, with the monsters of mentality striking again.

Yes, the visitors grabbed their invitation to be part of a far more balanced game than expected, a Ben Osborn volley was comfortably parried by Alisson, after some fine full-back to full-back interplay that felt like Alexander-Arnold and Robertson inspired stuff.

By the time you throw in a shout for a second penalty, when the ball hit Robertson’s hand, then Chris Wilder has every right to spin a tale of misfortune despite ignoring that under the current interpretation of the handball rule, it was never a penalty.

Not many teams have struggled as badly as Sheffield United during this unsettling empty stadium era, and it is only natural that Wilder should want to veer down any vaguely positive fork in the road right now.

But if he brings his team to Anfield and the penalty they are awarded is given at the other end for a challenge on Mohamed Salah, then I think it’s safe to suggest his take on it would be an alternative one.

The equaliser came shortly before the interval after a beautiful Jordan Henderson cross was met by a powerful header from Mane, and a fine save from Aaron Ramsdale would only fall to the feet of Bobby Firmino. The Brazilian international will undoubtedly be uplifted by the goal.

Rather than capitulate, the Blades returned for the second half with a renewed vigour. Attempts at goal were met with deflections and blocks that averted the danger, and once Salah had his beautifully taken effort dispossessed from him, despite the disallowing of his goal, it was a moment that saw the visitors freeze.

Liverpool began to increase the pressure from there and what turned out to be Diogo Jota’s headed winner felt like a rebate for the unfortunate events of the previous 246 minutes of Premier League football.

Unlucky not to score, Salah hit the post while Mane complained the ball wasn’t rolled to him. As strong a sign that business can return to normal very soon, perhaps.

Jota starting, meant a change of formation to a 4-2-3-1, something that resembled 4-4-2 at one point, yet despite the hit and miss nature of the win on Saturday, it is a shape I’d happily see deployed again.

Champions League football on Tuesday, against Midtjylland, then a bubbling West Ham United on Saturday, both at Anfield, prior to a difficult week on the road against Atalanta and Manchester City. This is our path to the next international break.

It is the period where the early events of the new season begin to form into the patterns we will take into the winter. Wherever we are come the end of the campaign will be greatly influenced by the next four games.