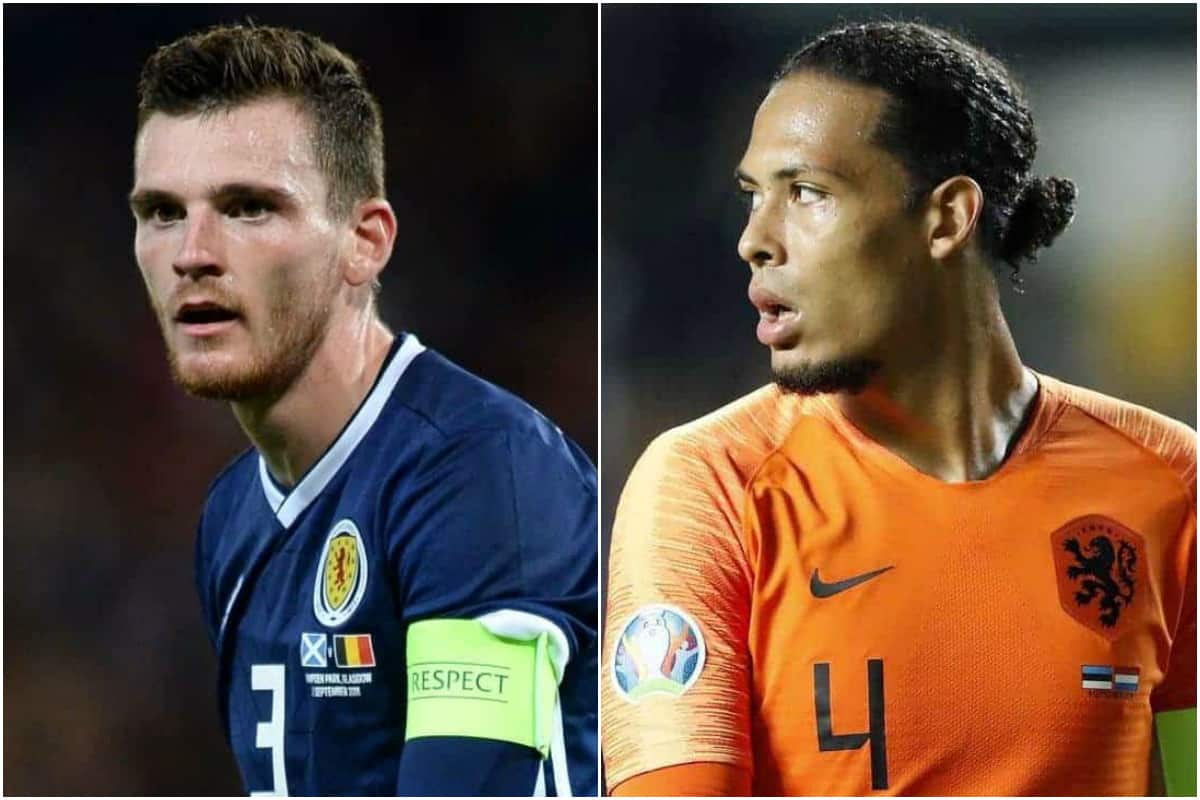 Virgil van Dijk was used as an emergency striker as the Netherlands failed to score again, on a night that saw Andy Robertson celebrate a year unbeaten with Scotland.

The October international break is nearing an end as most nations play their second of three games this month, with Liverpool back in action on Saturday for the Merseyside derby.

Joe Gomez was left out entirely at Wembley, while Divock Origi was an unused substitute for Roberto Martinez’s side.

Elsewhere, though, it was largely a night of 0-0s for Liverpool’s internationals, most notably for the Netherlands, who were unable to overcome a stubborn Bosnia & Herzegovina.

Van Dijk and Gini Wijnaldum both played the full 90 minutes for Frank de Boer’s side, who failed to score for the second game in a row, drawing 0-0 at Bilino Polje.

Such was De Boer’s desperation that with four minutes left on the clock he sent on Nathan Ake in place of Daley Blind and moved Van Dijk up front alongside Luuk de Jong and Ryan Babel, with the latter wasting a big chance to seal victory.

Taking to Instagram after the game, Van Dijk expressed his disappointment despite recording a clean sheet, while Wijnaldum was even more sombre, describing it as “a tough one to swallow”:

Disappointing not to get the win but a clean sheet. Our full focus now moves on to Italy ahead of another big game. Great to see some fans back in the stadium too… it’s been a long time! ???

This is a tough one to swallow. We need to learn from this, adapt and work towards the next game again with full focus.

Elsewhere, though, Robertson captained Scotland into their third game of the UEFA Nations League campaign, ending in a 1-0 victory for Steve Clarke’s side at home to Slovakia.

Robertson played the full 90 minutes at left wing-back, three days after lasting 120 minutes and a penalty shootout as Scotland edged past Israel in their Euro 2021 qualifier, with his importance to Clarke demanding another start.

The win, decided by a 54th-minute goal from Lyndon Dykes, marked a year-and-a-day since Scotland’s last defeat with a priceless three points.

Their last loss came on October 10, 2019, with that being a 4-0 thrashing at the hands of Russia, and since then have produced six wins and a draw.

Another massive win! The lads did brilliantly again, go on the Scotia ????????

The main positive for Liverpool, perhaps, is that a booking rules Robertson out of Wednesday night’s clash with the Czech Republic, leaving Clarke with a hole to fill with Kieran Tierney still sidelined due to COVID-19 concerns.

Earlier on Sunday, Wales and the Republic of Ireland played out a 0-0 draw in Dublin, in a game marred by the absence of five Irish players after one tested positive for COVID-19, depleting the squad further after two previous withdrawals.

Harry Wilson started for Wales, with Neco Williams coming off the bench to take his place after 67 minutes, while Caoimhin Kelleher was an unused substitute for Ireland, who ended the game with 10 men as James McClean saw red.

Finally, Diogo Jota replaced Bernardo Silva for the final half-hour of an even 0-0 draw between France and Portugal, struggling to make much of an impact bar setting up a chance for Joao Felix.

Monday brings a break for Liverpool’s internationals, with Takumi Minamino the headline act the following day as Japan play their second of two friendlies, this time against the Ivory Coast.