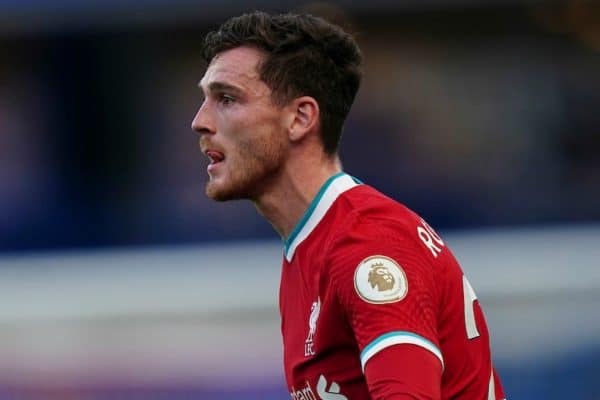 With Jurgen Klopp naming Andy Robertson as a possible ‘Mascherano’ option at centre-back for Liverpool, the Scot has said “whatever the manager asks of me, I’ll do it.”

In the wake of a number of injuries at the heart of defence last month, Klopp revealed how Javier Mascherano’s success at centre-back for Barcelona could inspire him to experiment.

At the time, Joe Gomez was the only fit senior option, now it is Joel Matip, with Fabinho on hand to partner him as he continues his shift from midfield, while Nat Phillips, Rhys Williams and Billy Koumetio are also available.

“We still, obviously, have other options like Hendo, or Gini or James and Robbo can play centre-half as well,” the manager explained.

“They are all not smaller than Mascherano, for example, and he played pretty well in that position.”

It seems unlikely, particularly given the performances of Phillips and Williams when called upon, but Robertson is more than willing to fill in if required, despite never having played centre-back before.

“I don’t think I’ve done it before but if the manager thinks that’s an option, then I’ll play it and do it to the best of my ability,” he told the club’s official website.

“Whatever the manager asks of me, I’ll do it.

“Look, if that becomes an option or that becomes the case, like I said, I’ll do it to the best of my ability and I’ll try my best, like I do in any other position.

“The centre-backs have been hit hard – Joey and Virg long-term injuries, which is devastating, and Fab on his way back and things like that.

The availability of Kostas Tsimikas does allow Klopp the option to switch things up at left-back, though the Greek is untested in the Premier League, having only played twice, in the Champions League and League Cup, since joining.

And while it is improbable, Robertson’s willingness to play centre-back highlights his commitment to the cause, with the 26-year-old predicting that versatility could be key in a uniquely packed season.

“All the lads here, we can all adapt to different positions and do our best in those positions,” he continued.

“We might need to do that more this season because we’ve been hit with quite a few injuries and there’s no saying that there might be more to come.

“But hopefully everyone now is fit and we’re only adding to the squad instead of taking away.

“Hopefully there’s a couple that are pretty close and hopefully in a couple of weeks our squad will be back to being a really strong one.”

Realistically, the best-case scenario if Robertson does fill in at centre-back is in a back three, and Klopp has already shown he is open to tweaking his system this season, debuting a new 4-4-2 in recent games.

But for now, the No. 26 is undoubtedly best used in his natural role, as one of Liverpool’s top performers so far this season from left-back.