Gini Wijnaldum brought his goal tally for the Netherlands to 12 in his last 19 games, as the Liverpool midfielder shone as captain in a 3-1 win over Bosnia-Herzegovina.

The exceptional talents of Wijnaldum ensure he stars in vastly different roles for club and country.

For the Reds, he is the industrious, press-resistant possession player, while for the Dutch he is a dynamic, front-footed goalscorer.

Having taken the captain’s armband in the absence of Virgil van Dijk, Wijnaldum has maintained his prominence with the Netherlands, under new management in Frank de Boer.

Sunday saw the 30-year-old start again, as the most advanced of a midfield three, supported by Frenkie de Jong and Davy Klaasen, and it took him just six minutes to trouble the scoresheet.

It came via a brilliant, ghosting run into the box after Memphis Depay freed Denzel Dumfries down the right-hand side of the box, creeping into space to tap home the right-back’s cross.

He made it 2-0 in the 13th minute, again showcasing his ability to be in the right place at the right time as Depay’s cross found Steven Berghuis, whose header was converted by Wijnaldum in the six-yard box.

Wijnaldum peeled away in celebration with a tribute to Van Dijk, emulating the centre-back’s moves after scoring in the 4-3 victory over Leeds at the start of the season.

De Boer, conscious of managing his key players’ fitness during a busy schedule, brought his captain off with 64 minutes later, with the Netherlands 3-0 up by that point after a goal from Depay.

Smail Prevljak grabbed one back for Bosnia-Herzegovina, but it was too far gone for the visitors, as the Netherlands moved to the top of their UEFA Nations League group with Poland and Italy to play later in the evening.

A brace for Wijnaldum brings his all-time goal tally for his country to 15, but remarkably, and more impressively, 12 of those have now come in his last 19 appearances. 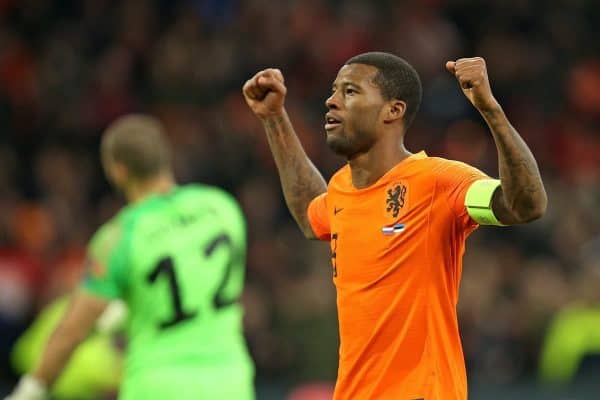 It is his third time scoring two or more in a game in his last nine outings for the Netherlands, with a brace in the 2-1 win away to Belarus last October and a hat-trick in a 5-0 thrashing of Estonia a year ago.

While Jurgen Klopp clearly favours Wijnaldum’s ability to hold onto the ball and allow his forwards to work their magic, there is another dimension in his game that can be unlocked at club level.

With it unlikely he extends his stay at Anfield beyond the end of the season, it could be that he is allowed to flex this attacking muscle elsewhere in the future – particularly if former Netherlands manager Ronald Koeman is retained at Barcelona.