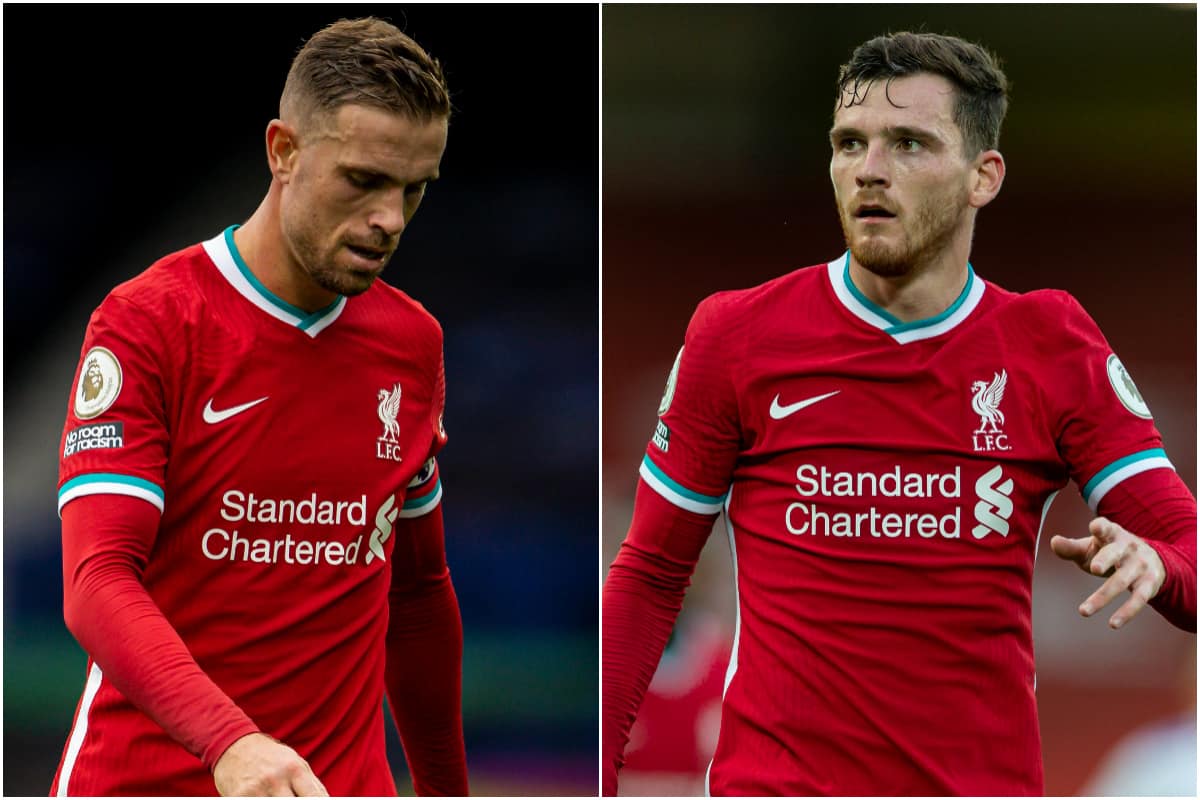 Jordan Henderson has become the latest Liverpool player troubled with a minor injury during the international break, coming off at half-time in England’s 2-0 loss to Belgium.

The Reds captain started as the Three Lions visited Belgium in the UEFA Nations League, with goals from Youri Tielemans and Dries Mertens in the first half enough to seal victory for Roberto Martinez’s side.

Gareth Southgate made a change at the break, and initially it was considered to be a tactical one, with Harry Winks taking over from Henderson in midfield.

But speaking after the game, Southgate revealed that Henderson had “a bit of tightness” that forced him to request a substitution.

“Jordan had a bit of tightness at half-time, and felt he couldn’t carry on,” he told reporters in his post-match press conference.

When asked if it was a hamstring issue, he said: “Medically, I would have to leave that for now, but we’ll just have to assess him when we get back.”

England are now technically ‘out’ of the UEFA Nations League, with their final game at home to Iceland on Wednesday now a dead rubber, and Southgate accepted there would be “pressure” from clubs to release players early.

“It’s still a game where there’s opportunities for people to cement a place in the team, or in the squad,” he insisted.

“We’ll find out a lot now, because for sure there’ll be a lot of pressure from some clubs on their own players, that’s what we live with consistently, but we’ve got players who want to play for England.”

Henderson could well return to Liverpool before the clash at Wembley, with there being no need to risk him for a meaningless game, and Southgate may feel obliged to omit him given the injury Joe Gomez suffered earlier in the break.

Meanwhile, Andy Robertson is expected to travel with the Scotland squad to Israel for their final UEFA Nations League clash on Wednesday, despite missing Sunday’s 1-0 loss to Slovakia with a hamstring complaint.

“There were three or four players who could have done with another 24 hours, just to get their recovery right. The game came a little too soon for them,” Steve Clarke said, having made eight changes for the trip to Trnava.

“Andy was probably a little bit worse than the rest, which is why I left him out. It would have been too big a risk.

“But he’s coming to Israel so we’ll assess him over there and hopefully get him on the pitch. That would be good as we’d like our captain on the pitch.”

The hope is that Robertson is not feeling any lasting effects, but also that Clarke would not gamble with his fitness despite Scotland needing a win to guarantee top spot in their UEFA Nations League group.

Neither Henderson or Robertson should be considered major concerns for Liverpool, but it is certainly worrying as the injuries and illnesses mount up during the international break.

Gomez is likely to be out for the rest of the season after undergoing knee surgery, while Mohamed Salah is expected to miss the visit of Leicester on November 22 after contracting COVID-19.