Gini Wijnaldum is in the final months of his contract with Liverpool and Jurgen Klopp has given the clearest indication yet that a renewal appears unlikely.

The Reds are relying on the No. 5 an awful lot this year, as his fitness and performance levels have been largely exceptional while others succumb to injuries.

But asked on Friday about the Dutch midfielder’s long-term future, Klopp acknowledged that “nothing is decided” on him staying at Anfield beyond 2021 and made the comparison with former Red Emre Can.

“I would be happy if he would stay here. I’m pretty happy with Gini [as] you see when you look at most of the line-ups!” Klopp said.

“He was always good. I cannot remember a lot of bad games, he played for us plenty of positions, he’s in a good moment and long may it continue.

“As long as nothing is decided, everything is possible and I’m positive.”

The Athletic have noted that Wijnaldum has not been offered a contract this season after talks “broke down” during 2019/20, but they also report that Wijnaldum told Klopp directly that he remained “fully committed” for the season ahead.

That appears backed up by Klopp’s assertion that Wijnaldum will be at 100 per cent up until the point he leaves, though that departure does now appear likely in the same way Can left for Juventus, before now starring with Dortmund.

“Gini is one of the best people I ever trained and he’s an outstanding person. It means no issue at all. It’s professional, our relationship didn’t change at all.

“We had situations like this with Emre Can for example. He gave us absolutely everything until the last day of his contract.

“Gini will do the same, no doubt about that and no harm for our relationship whatsoever.” 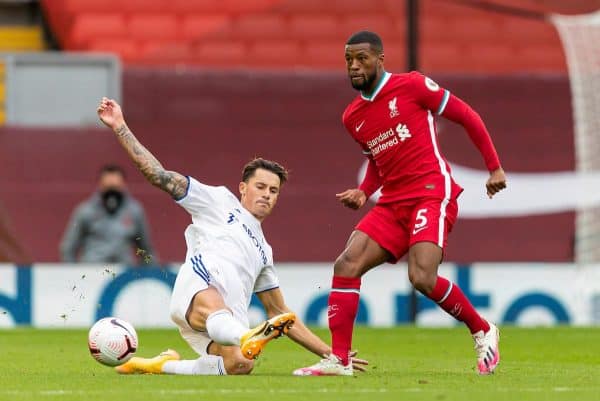 Wijnaldum is likely to remain central to Klopp’s plans over the coming weeks with a line of midfielders and defenders out injured.

But if there’s a probability that he departs on a free at the end of the season, it’s absolutely certain that the succession plan is either already in the pipeline, or else already in place with the likes of Thiago and Curtis Jones.

If he does leave, Wijnaldum will have been an absolutely massive part of the club’s rise from also-rans to champions of everything, with Gini himself netting a milestone goal to take Klopp’s side in the Champions League back in 2017.