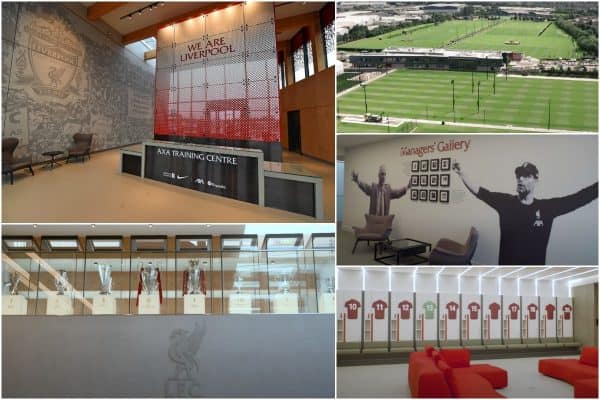 Life at the club’s new training centre in Kirkby is officially underway as Liverpool celebrated the opening of the new state-of-the-art AXA Training Centre.

The Reds packed up 70 years of history at Melwood over the last week and relocated to Kirkby, linking the club’s academy and senior team together under one roof for the first time.

It has been a move a long-time in the making and forms part of the long-term vision shared by Jurgen Klopp and owners FSG as the club continue to forge ahead and add more successful chapters to the history books.

The facility is one which boasts spaces for training across both indoors and across three full-size pitches, in addition to access to world-class rehabilitation facilities and common areas.

It is a move which the boss has welcomed with open arms as he looks to continue moulding “the future” for the club with new foundations under his feet and those of his fellow coaches and players.

“It’s a wonderful building, you have everything you need for now and for the future. The working space is actually what I’m really excited about,” Klopp said.

“The pitches will be incredible, obviously, the set up of the offices, the new indoor-outdoor is really massive, both the rehab gym and the normal gym are exceptional – are state-of-the-art.

“We built some other things as well like paddle tennis court, a tennis court, we have beach soccer, beach volleyball, we have different areas where we all can stay fit as well and I’m really excited.

“The relationship with the academy will be as close as ever, and that’s really good,” Klopp continued.

“I don’t think a lot about it to be honest because we are obviously really in the daily basis stuff but now we are talking about it, I’m getting more excited about it – it will be great!

“I think it’s a good time, especially after winning the first time the title after a long, long time that we go to a new place to create the future, a place where we can create from now on everything that will happen for this wonderful club.”

It marks another exciting step for Liverpool and the video released by the club shows the training centre in all its glory, from the atrium which greets players and guests upon arrival, to the dressing rooms, Klopp’s office, tennis courts, swimming pool and gyms.

And you cannot look beyond a new edition of the walk of champions, one which shows off each piece of major silverware won in the club’s history in all its glory – where the Premier League trophy and 18 First Division titles are displayed separately.

With players steadily returning from international duty, it will not be until later in the week when the team reconvene together for the first time in their new home away from home.