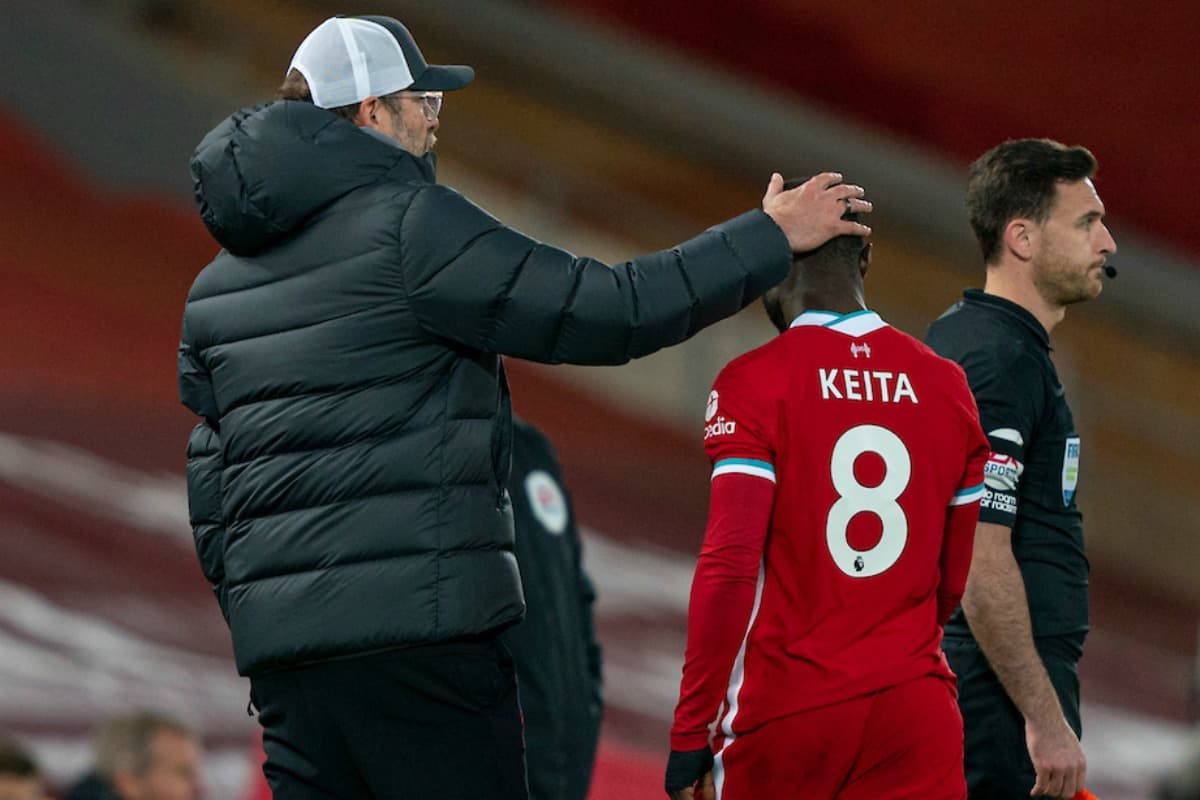 Liverpool manager Jurgen Klopp will be hoping for some good news on the fitness of midfielders Thiago Alcantara and Jordan Henderson in the next 24 hours after being struck down by yet more injury problems.

The defending Premier League champions underlined their enduring quality and will to win with a comfortable 3-0 victory over Leicester – setting a new club record of 64 unbeaten league matches at home – despite missing 10 members of his first-team squad.

But just as Klopp got Fabinho back from a three-week lay-off with a hamstring problem to play as an emergency centre-back he lost fellow midfielder Naby Keita to a similar injury.

And midfielder Xherdan Shaqiri did not even make the squad after it was discovered he had returned from international duty with yet another muscle problem.

With Wednesday’s Champions League visit of Atalanta offering the chance to secure qualification to the knockout phase with two matches still to play Klopp will hope either or both of Henderson, who came back from England duty with a thigh problem, and Thiago, having been sidelined by a knee problem since mid-October, can be available as he is still without Alex Oxlade-Chamberlain, who has not played after a knee injury in pre-season.

Without him his midfield options look fairly slim as, with James Milner filling in at right-back for the injured Trent Alexander-Arnold, 19-year-old academy graduate Leighton Clarkson made his first appearance in a match day squad against the Foxes after they learned of Shaqiri’s unavailability.

“Shaq had a muscle injury with the national team which he didn’t really realise,” said Klopp.

“He trained with us, we gave him a day off and then he came back and was involved in the session, but was not fully involved.

“After that he felt a little bit (of a problem). Then we did a scan and they found he has an injury from five or six days ago.

“Nobody knew about that, not even Shaq knew about it, but that’s how things sometimes are and so he was not able to be involved.

Mohamed Salah is likely to return to the squad after a negative Covid-19 test having tested positive on international duty with Egypt but in his absence summer signing Diogo Jota continued his hot streak.

A seventh goal in his last six club appearances saw him become the first Liverpool player to score in his first four home top-flight appearances.

“Yes, he’s a good player – that’s the reason why we signed him,” was Klopp’s assessment.

Leicester manager Brendan Rodgers has injury problems of his own, although not to the extent of his successor at Liverpool.

He had hoped to have left-back Timothy Castagne back for the trip to Anfield but the Belgium international suffered a minor set-back in his recovery from a thigh injury.

“He had a few good days training and we thought he would be all right but there was something minor, he felt a slight twinge and it was too big a risk for him,” he said.

“We will see how he goes next weekend. He had a scan and was OK.”

Rodgers was happy to put defeat at Anfield, ending their 100 per cent away record in the league this season, down to a blip.

“We will put this behind us very quickly and we will move on,” he said.

“We don’t dwell on it, we’ve had a terrific start.

“The players until this point, nine games in, have been great. Games away from home against Man City, Liverpool, Arsenal and Leeds has been a tough period for us.”