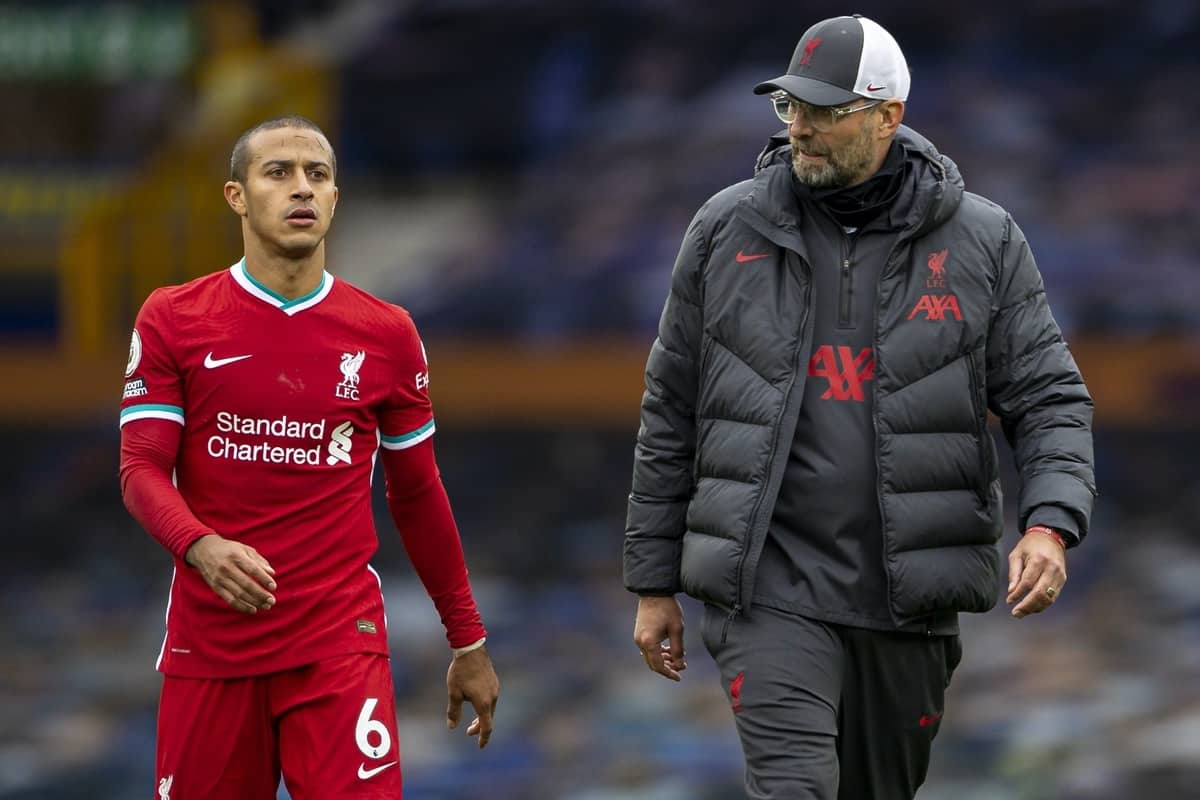 Thiago is likely to miss Liverpool’s upcoming clash with Leicester with Jurgen Klopp insisting he “will not rush” him back, as “we prepare him for the rest of the season.”

The Reds’ high-profile summer signing has only featured twice since joining from Bayern Munich, coming off the bench against Chelsea and then, almost a month later, playing the full 90 minutes against Everton.

A red-card challenge from Richarlison in the Merseyside derby has left Thiago sidelined ever since, with the 29-year-old missing the last six games, which is expected to become seven on Sunday.

Leicester visit Anfield this weekend but, while Fabinho is due back, Liverpool’s No. 6 is unlikely to be involved, with Klopp providing an update on his recovery in his pre-match press conference.

The manager explained that while Thiago is back in light training, the club “will not rush it” when it comes to his return, as they are preparing him “for the rest of the season,” rather than one game.

“It was a straight hit on his knee, so that’s the consequence of the injury,” he explained.

“I cannot change these things, we have to deal with the consequences of injuries, of the accidents, things that happen, fouls, whatever. In this game they were fouls, harsh fouls.

“But he’s out there on the pitch, he’s running, he’s doing a lot of stuff, so it will not be too long anymore.

“In the beginning [we were worried], because in the same day we got the horrible pictures from Virgil, and then we were kind of relieved that it’s not that serious for Thiago.

“But it was always clear it would not be two or three days. In the first few days, we thought it would settle quickly, but it didn’t.

“So that’s what you have to accept, and that’s why we will not rush it.

“We prepare him for the rest of the season, not for the first game he can play again. That’s the situation.”

Joel Matip suffered a muscle injury during the derby and subsequently missed four games while sitting out of another as an unused substitute, only returning to start in the 1-1 draw with Man City on November 8.

Klopp expressed a similar reluctance to “rush” the centre-back as he approached his return, and with Thiago‘s injury more serious it is likely that he will miss more games than the visit of Leicester.

Atalanta and Brighton are next in a busy week for the Reds, and it could be that the Spaniard is only available after this run, with less than a 72-hour turnaround between each of the three games.

A layoff of six to eight weeks is typical for the injury Thiago appears to have suffered, and that could see him return at any point within the first fortnight of December.

It is a frustrating situation for all involved, but a necessary one, and the hope will be Thiago can make a bigger impact in the second half of the campaign when fully fit.