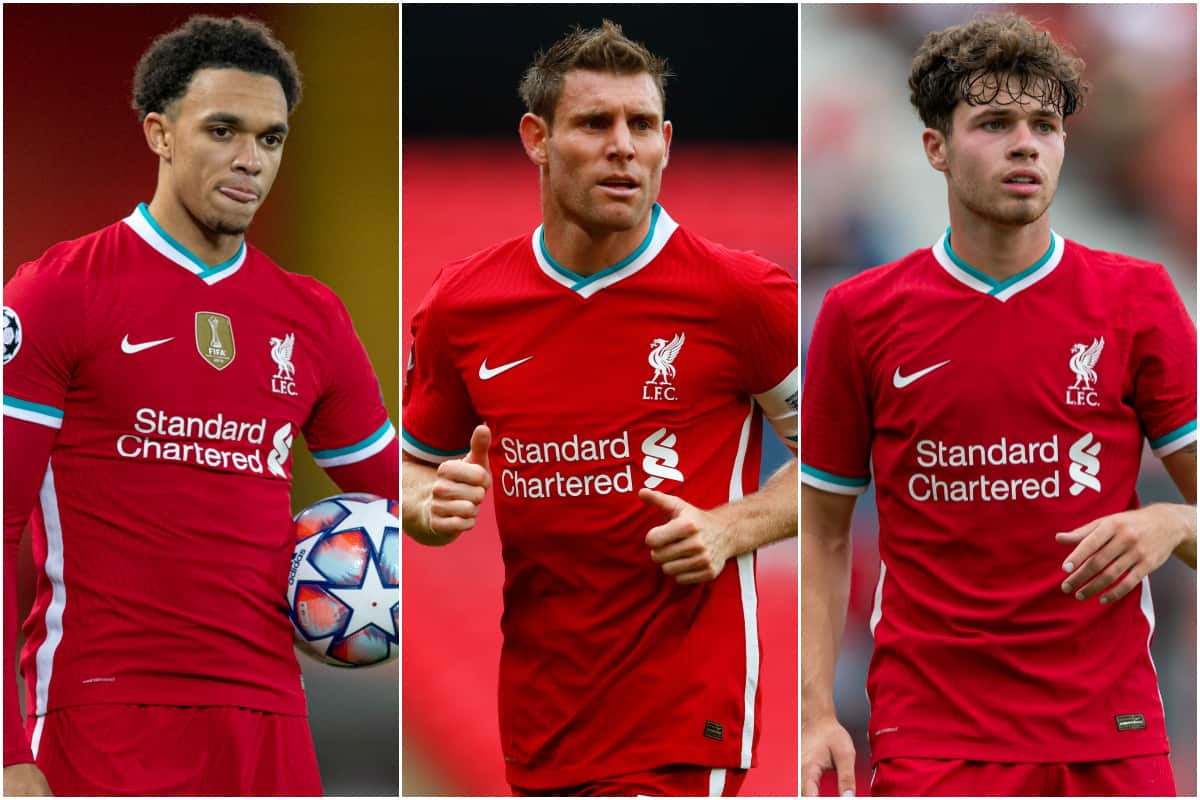 Trent Alexander-Arnold‘s absence is a major blow for Liverpool, but in the five-game stretch they are likely to be without their right-back there are a host of options.

It seemed inevitable that Alexander-Arnold would suffer an injury at some point in this relentless, congested season, and it came 11 games into his campaign at Man City.

Pulling up with a calf problem at the Etihad, the 22-year-old is now expected to miss a month of action, which should rule him out of upcoming clashes with Leicester, Atalanta, Brighton, Ajax and Wolves.

Alexander-Arnold’s importance to Liverpool is undeniable, and the No. 66 had looked closer to top form in recent outings, which suggests his loss will be felt heavily.

And once again, following injuries to the likes of Virgil van Dijk, Fabinho and Thiago, Jurgen Klopp is left to solve the problem of missing a key player – one who has started every game in the Premier League and Champions League so far this season.

Whether or not Klopp has overused Alexander-Arnold, and this prompted a muscle injury, is an argument for another day, with the focus on looking ahead to five varying challenges.

So who could, and is likely to, fill in for Liverpool’s first-choice right-back? 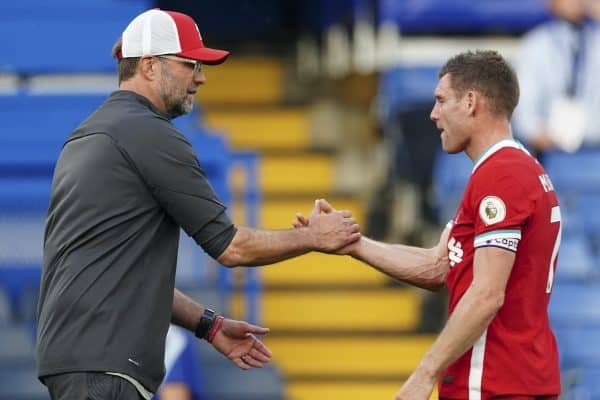 There are two obvious candidates when it comes to replacing Alexander-Arnold, and it is likely that they alternate as starters in the month ahead.

James Milner came on midway through the second half at the Etihad, and his reliability should make him the go-to stand-in for the bigger tests to come – namely Leicester and Wolves in the league.

Klopp’s dependence on Alexander-Arnold, to the point of injury, was partly due to the inconsistency of starters in the absence of Van Dijk at centre-back, with the manager highlighting the No. 66, along with Joe Gomez and Andy Robertson, as a leader.

As Gomez settles into a new partnership with Joel Matip, and fingers remain crossed that Robertson can maintain his fitness while rotating with Kostas Tsimikas at left-back, Milner can provide further leadership at the back.

However, it cannot be overlooked that the 34-year-old provides considerably less in terms of end product than the player he is replacing – his role in the system will be functional, rather than focal.

There may be an element of risk, but when Neco Williams has filled in for Alexander-Arnold in certain games – most notably in the League Cup win over Arsenal last season – there have been signs he is able to provide more as an all-round right-back, and particularly in the final third.

Much depends on Klopp’s faith in the 19-year-old, and the progress of Matip alongside Gomez, but the situation is set up perfectly for Williams to take his opportunity.

His namesake, Rhys Williams, is the poster boy in this respect, having emerged in the wake of a centre-back crisis and convinced the manager of his long-term potential.

Consistency of starts may benefit whoever comes in, but there is certainly a case to argue that rotating Milner and Williams between fixtures – Leicester, Brighton and Wolves for the vice-captain; Atalanta and Ajax for the youngster – is the best course of action.

If Liverpool take victory from the visit of Atalanta on November 25 progress to the last 16 of the Champions League is all but sealed, which would aid this approach immeasurably. 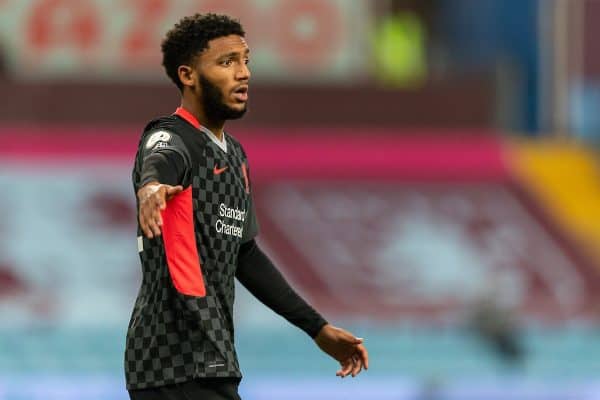 Beyond Milner, the jack of all trades, and Williams, the specialist backup, there are a number of other potential solutions within Klopp’s squad.

The most natural is Gomez himself, with the 23-year-old having honed his craft as a right-back with Charlton and throughout his first three seasons with Liverpool.

But with Van Dijk sidelined, Gomez is Klopp’s new de facto centre-back leader, and while a pairing of Fabinho and Matip may allow him to shuffle over to his former role, it seems an unnecessary detour for both player and club.

Closing in on a return to fitness, Fabinho himself has vast experience as a right-back, having begun his professional career in the position – it is also one he almost exclusively played in for Brazil until a recent shift.

Like Gomez, however, the No. 3 is too important in other roles – arguably two, as a defensive midfielder and centre-back – to see him take up duties on the right flank for any extended period over the next month.

Similar can be said of Jordan Henderson, though any demand on the captain to perform in midfield is alleviated by the return of Fabinho and Thiago from injury.

Henderson may actually be the best like-for-like replacement for Alexander-Arnold in terms of his physicality and skillset, but though he may be willing, he should remain little more than an emergency option.

While Milner and Williams are the obvious choices, though, this does highlight the variety of candidates Klopp can consider – particularly as he embraces unpredictability.

Who else could benefit?

In an ideal world, Alexander-Arnold’s recovery goes according to plan, or better, and Klopp is able to make do with Milner as his primary stand-in at right-back.

If Williams is able to take his chance, too, it could well be a situation that, although an undeniable setback, could turn into a positive for Liverpool in the long run.

Having undergone a difficult period in his time in the Reds’ first team, with social media criticism of his form prompting a vocal defence from Klopp and heart-to-hearts in the dressing room, this could be a window for Williams to make a statement.

Produce a string of comfortable performances in Alexander-Arnold’s stead and the Wales international may convince those who count that he can be a viable starter for Liverpool now, rather than in the future.

Beyond Williams, though, the loss of a right-back could see academy youngster Conor Bradley receive further experience of senior training. 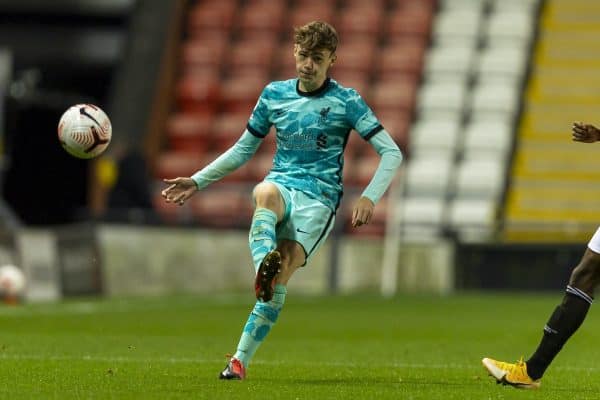 The 17-year-old was called up to Melwood in September, when Williams himself was absent, and with the Reds now moving to their new facility in Kirkby, drafting in youngsters from the under-23s and under-18s will be much easier.

And while there are a plethora of players ahead of him in the pecking order, Bradley can look to the progress the likes of both Neco and Rhys Williams, Jake Cain and Billy Koumetio have made, when previously not featuring on Klopp’s radar, as encouragement.

It is far from a perfect situation, but as Adam Lallana claimed in following Van Dijk’s injury, “it’s a test that [Klopp will] love,” as new problems require new solutions.